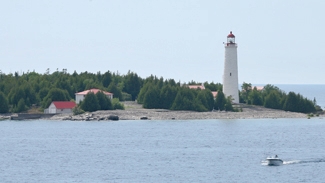 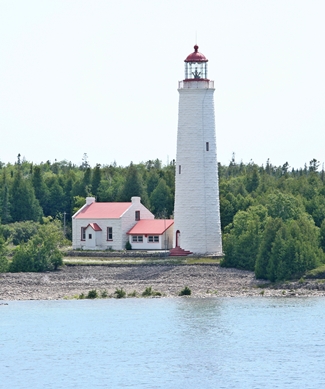 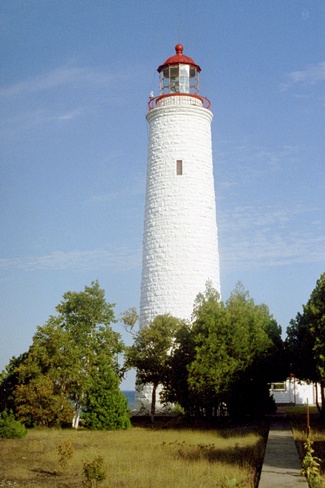 Before there were any lighthouses on Georgian Bay, a few villages would place a light on a pole to help guide ships into their harbours. In 1855, the railroad reached Georgian Bays shores at Collingwood, making the area an important transshipment center and prompting the Imperial Government to construct a series of stone lighthouses to light Lake Huron from Point Clark to Christian Island.

The lighthouse on Cove Island, situated at Gig Point on the northwest tip of the island, marks the strait between Lake Huron and Georgian Bay and has the distinction of being the first lighthouse to be lit on Georgian Bay and the last to have its keeper removed.

Construction, under the direction of contractor John Brown, began in the summer of 1855. The site was marked by the squaring of a small tree, and the crew of sixteen men, consisting of a foreman, four stone masons, three stone cutters, and eight labourers, began the painstaking task of building the tower with the assistance of a horse. The white limestone used to construct the tower was extracted from the island. Budgets ran over, construction was delayed at times, and by November 1855, only the dwelling and first storey of the tower were completed.

A year later, in October 1856, the tower had reached its full height of eighty feet. The stonework was completed in 1857, but it wasnt until 1858, when a crew of French technicians, under the direction of A. de St. Aubin, assembled the twelve-sided prefabricated lantern room and the second-order Fresnel lens mechanism, that the lighthouse went into service. Keeper George Collins lit the lamp inside the giant lens for the first time on October 30, 1858.

In a letter dated November 2, 1858, engineer William Scott described the lighting apparatus then gave his thoughts and impressions while he watched the light illuminate the dark night sky for the first time:

This light is the Lenticular Flash light, revolving on its axis every 10 minutes, but producing the Flash or wave of light every 30 seconds or twice in one minute. The effect from a distance is Grand beyond description as it seems to gather together, rolling itself up into the dark cloudy night and then bursting out into a brilliant flame that illuminates the whole horizon, and cannot be better illustrated, than by the sudden appearance of a Brilliant sun breaking out of a dark rolling cloud.

Keeper Collins, who came to Cove Island with his wife Sophia and four-year-old son Charles, received an annual salary of $435. They arrived on May 22, 1858, and Collins maintained a light on a pole, while the tower was being completed. He described some of the hardships he initially faced in the lighthouse:

I beg to report that in consequence of the rain which has been coming in the tower since Mr. Scott left and for the want of a stove to keep it dry. All the inside parts of the lantern glass is a glitter of ice. I have been constant tending the machinery and the above. Myself and acting assistant is nearly frozen before our watch is over we have both of us very bad cold. Every thing wet & freezing around us I shall do all in my power to keep a good a light as possible

To make matters even worse Collins was from and after the 22nd day of November A.D. 1858 and until the 12th day of April 1859 . . . deprived of the help of any assistant other than his wife Sophia Collins.

Keeper Collins was transferred to Nottawasaga Island on September 20, 1859, when he worked out a deal with David McBeath to swap assignments.

It was early December 1860, when McBeath, living at the station with his wife, Mary Jane, and their five children, had not yet received the stations regular provisions. After rationing their food for weeks, the family was becoming desperate. With the lake beginning to freeze, the McBeaths had a decision to make: they could either stay on the island and hope that food arrived soon or flee the lighthouse and risk reaching the mainland in the stations boat.

A month earlier, McBeath had sent an urgent letter to the Department of Public Works and twice had sailed into the shipping lane to flag down a passing vessel  all seemingly to no avail.

Keeper McBeaths plea for help had been passed through several ships, but there was only one steamer capable of cutting through the icy waters, the Rescue, which was on her last trip of the season but expected back at her winter quarters at Collingwood any day. When the Rescue arrived in port, James Dick, its captain, agreed to attempt a trip to Cove Island.

In the middle of a raging storm, Captain Dick departed Collingwood harbour on the afternoon of December 6 and safely delivered McBeaths provisions. Dick reported that the lightkeeper and his family were about to commit themselves to the Lake upon a very insecure Raft, in the midst of the Storm. The appropriately named Rescue battled the heavy seas back to Collingwood and was stowed for the winter.

David McBeath died on March 5, 1872, and William McBeath took over as keeper.

A steam fog alarm was added to the station in 1885, and it was upgraded to a diaphone foghorn in 1905. The current foghorn building was built in 1947 to replace the original that was destroyed by fire, and it contains the last intact diaphone apparatus on the Great Lakes.

Iris was nineteen years old in 1945, when she married Keeper Harold Hal Banas and traded mainland life to be one of Cove Islands three inhabitants, the other being assistant keeper Earl Banas, Hals brother.

The couples wedding ceremony was held on the island, with Earl as best man. He said, Hal and Iris pulled a surprise on me. I didnt know a thing about it until I met the minister and he said his visit was to officiate at the marriage.

The following April, Hugh Rumley, Flowerpot Islands lightkeeper, noticed that Cove Island light had remained dark throughout the night. At daybreak, Rumley sped across the rough seas and was greeted by Iris, who reported that her husband and his assistant had not returned the previous night after going out to test their new twenty-foot boat and motor. Iris only way of signaling for help was to keep the light dark. A sea and air search began, and later that day, an aircrew spotted the stations partially submerged boat near Half Moon Island. Moments later, the two marooned keepers were seen waving from the island. The boats new engine had broken down, and while rowing back to Cove Island, the oarlocks snapped, leaving the two keepers to the whims of the sea.

William Spears, lightkeeper at Cove Island from 1949 to 1976, spent his life on the lights. He was six months old, when his father William, became keeper of Flowerpot Island. His duties at Cove Island included reporting weather and other information to the Coast Guard three times a day. During the reports, he would mention any sign of trouble such as bonfires on the tiny islands in the vicinity that might be distress signals. Weather permitting, Spears would often row over to rescue stranded boaters himself.

You put the light out at sunrise, and lit it at sunset. So it was idle all through the day. You cranked the thing up in the morning when you put the light out, cranked it up and put a block under the weight. And then you went out at night and took the weight out and started it revolving. And there were curtains all the way around the windows. The sun shining through the lamps to the other side would break the glass on the other side. Oh it was hot. When the lens was stopped, if the sun got to a certain position and focused through the lens on both sides. Oh, it would burn a hole in the curtain on the other side in nothing flat if you didnt start on the right side to take the curtains down. It was just when the sun was on the horizon; it had to be on a certain level.

Keeper Spears loved the deep vibration of the diaphone foghorn. One night, after it was replaced by an automated electric system, he couldnt take the new puny sound any longer and pulled the plug and started up the real foghorn. Spears then sat back and listened to its reassuring tone one last time.

Jack Vaughan, the lights last keeper, came to Tobermory in 1959, and while working at the new Cyprus Lake Provincial Park, he saw an ad in a local newspaper for a lighthouse keeper and applied. Vaughan was told the job would only last about a year, but it ended up spanning twenty-two, with stints at Flower Pot Island, Hope Island, Lonely Island, and finally Cove Island. He became head keeper at Cove Island in 1982, at which time the job was primarily one of caretaker.

After retiring and leaving Cove Island for good in 1991, Vaughan sent the master key back to the Coast Guard, who promptly returned it to him as a memento for his service.

Cove Island Lighthouse is still in operation, with the original Fresnel lens exhibiting a white flash every five seconds.

For a larger map of Cove Island Lighthouse, click the lighthouse in the above map.

Cove Island Lighthouse can be seen from the Chi Cheemaun car ferry as it goes between Tobermory on the tip of the Bruce Peninsula and South Baymouth on Manitoulin Island.