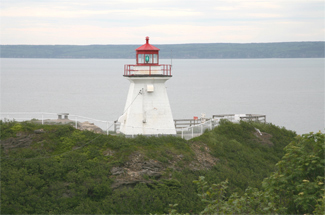 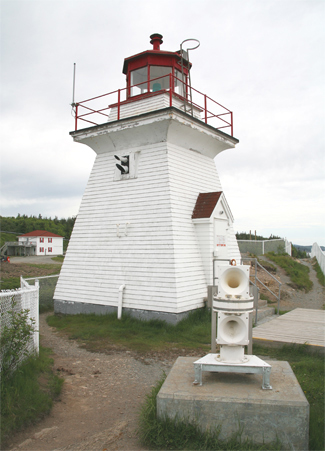 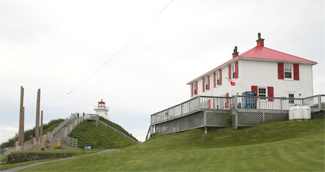 Cape Enrage is the southern tip of Barn Marsh Island, which is separated from the mainland by an easily passable, narrow tidal creek. The cape received its name due to a reef that extends seaward from the point and causes the surrounding waters to become violent or enraged during maximum tidal currents.

A petition from Isaac Turner, Rueben Stiles, James Brewster and six other merchants and ship owners of Westmorland County, asking that a grant be passed for a lighthouse on Cape Enrage, was presented to the government of New Brunswick in 1837, and the legislature appropriated a sum not exceeding £600 for the project.

In October of 1838 the Commissioners of Lighthouses for the Bay of Fundy provided a lengthy report to the legislature on why the lighthouse, which had been spoken of for years and for which the coasting craft had been most anxious, had not been built. When the commissioners initiated site selection at Cape Enrage, they quickly discovered that interested parties were sharply divided over whether a lighthouse on Cape Enrage would be preferable to one situated across Chignecto Bay at Apple River, Nova Scotia, so written opinions from the most experienced coasters on the subject were solicited. Three gentlemen submitted letters in support of Apple River, with one boldly claiming a light at Apple River will be of a thousand times more benefit to the public than one at Cape Enrage.

Only one letter favoring Cape Enrage was received, but it was signed by thirty-three men. These individuals, who had long been in the habit of coasting the Bay of Fundy, submitted four reasons justifying their claim that Cape Enrage was the preferred location:

The commissioners decided in favor of a lighthouse at Cape Enrage but suggested that the Lieutenant Governor notify his counterpart in Nova Scotia that a light at Apple River would greatly aid those navigating the bay.

The site for the lighthouse was purchased from Daniel Tingley, who offered to sell five acres on the extreme point of the cape for £20 and grant a right-of-way across his property. Rather than purchase a new lantern for Cape Enrage, the commissioners decided that the one in use at Partridge Island would be moved to Cape Enrage and a larger lantern would be ordered from England for Partridge Island. The English lantern arrived later than expected, delaying the completion and activation of Cape Enrage Lighthouse until the spring of 1840. The first keeper, James Munson, was paid £18 for living in and taking care of the lighthouse for part of 1839 and did not start receiving his full pay until the light was activated.

Although Cape Enrage Lighthouse was the eighth lighthouse to be constructed in New Brunswick, it was the first square one, all of the preceding being octagonal in design. Keeper Munson and his family lived in the thirty-nine-foot-tall lighthouse, which employed six lamps and reflectors to produce a fixed white light at a height of 161 feet above the bay.

Matthew Grieves was put in charge of the light in 1844 after Keeper Munson passed away. The next year, £50 was finally allocated to construct a road to the lighthouse, and in 1849, a landing was built on the east side of the cape and stairs and skids were put in place so the station could also be readily supplied from the bay.

In 1868, the Cape Enrage Lighthouse was declared worn out, and work on a new tower was completed the following year. The new light, however, was not exhibited until November 16, 1870 due to delays in receiving the lighting apparatus, a fourth-order lens. The old lighthouse, minus its lantern room, continued to be used as the keepers residence. The following description of this dwelling was included in the 1872 annual report of the Department of Marine. The rooms are very small and uncomfortable, and could not be used at all but for the addition or porch attached. The inspectors have not advised any repairs upon this old building for some years past, considering that the amount required to make it even a passable residence, would erect a new and suitable building. The necessity of this is now the more felt, as the severe gales during the last winter have all but demolished the whole structure.

A fog alarm building was completed at Cape Enrage in 1874, and an old boiler and engine from Partridge Island were installed therein. The whistle commenced operation on October 20th of that year and was cared for by William J. Starratt, who had been placed in charge of the station just a week before. Keeper Starratt received an annual salary of $800, out of which he had to hire an engineer to run the fog alarm (in 1875, his son was serving in this role). A new dwelling was also constructed in 1874 to house the keeper and engineer, along with their families. Marine Agent John H. Harding noted the improvement in navigation provided by the new fog alarm: The dread which this Cape and its frightful ledges have excited in the past has now given place to a feeling of confidence and security.

In 1876, lightning struck the south side of Cape Enrage Lighthouse, just below the lantern floor, and proceeded down that side of the structure shattering braces and posts as it went. On reaching the lower floor, the electric fluid divided, with one branch running along a door jam and passing into the ground below the doorstep and the other continuing down the south wall and creating quite a hole upon entering the ground. Had the lightning struck just a few inches higher it might have destroyed the lantern and lens, but as it was the damage was judged comparatively trifling.

During an inspection visit in 1877, Agent Harding found that Keeper Starratt had hired a new man to serve as engineer in place of his son. Harding was not pleased with this action and let it be known that no keeper should hire an assistant without first notifying the department. Otherwise, the department would be liable to have inefficient and incompetent, as well as unauthorized persons, placed in charge of valuable and important machinery and stations. Still, Agent Harding believed Starratt to be a reliable and efficient man and thought highly of his family. He has a very intelligent and interesting family, Harding wrote, and one could not but regret that owing to the isolated position of the Station they are denied the privileges of social and religious intercourse.

Keeper Starratt was dismissed in 1888 on grounds that he was absent from the station and neglected his duty. Years later, a debate was held in the Canadian Senate over whether Keeper Starratt had been replaced simply because of his political leanings.

A new boiler for Cape Enrage was constructed and installed at a cost of $925 in 1879 to replace the old boiler inherited from Partridge Island. Messrs. Wallace & Thompson, of Carleton, were hired to erect a new fog alarm building in 1888. The structure cost $1,900 and housed a Champion foghorn supplied by the Truro Foundry Company.

A third lighthouse, the one that stands today, was constructed at Cape Enrage in 1904. This tower is square in plan, has sloping sides, and is topped by an octagonal lantern painted red. The lighthouse measures twenty-nine feet from its base to the top of the ventilator on the lantern and has a focal plane of 125 feet. When its light was first exhibited, a fourth-order lens was in use, and petroleum vapour was being burned under an incandescent mantle.

A new duplex was built at Cape Enrage in 1952 to house the families of the two Coast Guard keepers who ran the station. James McAlesse was paid $21,981 for the double dwelling and an artesian well. By the 1980s, only one keeper was assigned to Cape Enrage, and in 1988 the light was automated and the station de-staffed.

Dennison Tate, a physics teacher at a high school in Moncton and son of a former lighthouse keeper on White Head Island off Grand Manan, would often visit Cape Enrage to hike, canoe, and climb the cliffs. During one such trip in the spring of 1992, he discovered the duplex at Cape Enrage was to be torn down. Tate stewed over the planned demolition during the summer and came up with a five or six-page plan for an outdoor adventure program at the cape that would be run by students and generate enough money to restore and maintain the station. Grants from a Federal Student Summer Works Program allowed Tate to hire six students during the summer of 1993 to paint the outside of the duplex, install new shutters, and construct a stairway down to the beach.

Little progress was made in 1994, but late that summer the Province of New Brunswick, with the encouragement of Albert County Heritage Trust, announced it was going to purchase the station from the Canadian Coast Guard. Tates group was given permission to launch its adventure program the following summer, and it has been operating ever since. The duplex, known as the Cape House, serves as housing for the students on staff and is home to a restaurant that serves lunch and dinner. A stairway to the lighthouse was completed in 1997, and a gift shop, known as the Whistle House, was built in 1999.

Under the direction of Dennison Tate and his wife Ann, many students have developed invaluable life skills at Cape Enrage and visitors have been treated to the thrill of climbing and rappelling at a spectacular setting, perfectly suited for such activities.

For a larger map of Cape Enrage Lighthouse, click the lighthouse in the above map.

Cape Enrage Light Station is now home to Cape Enrage Adventure Centre, which offers rappelling, climbing, tours of the lighthouse, and a restaurant. The cape is open year round, but the services of the centre are available from May long weekend (Victoria Day) through mid-October.