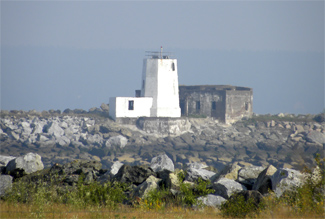 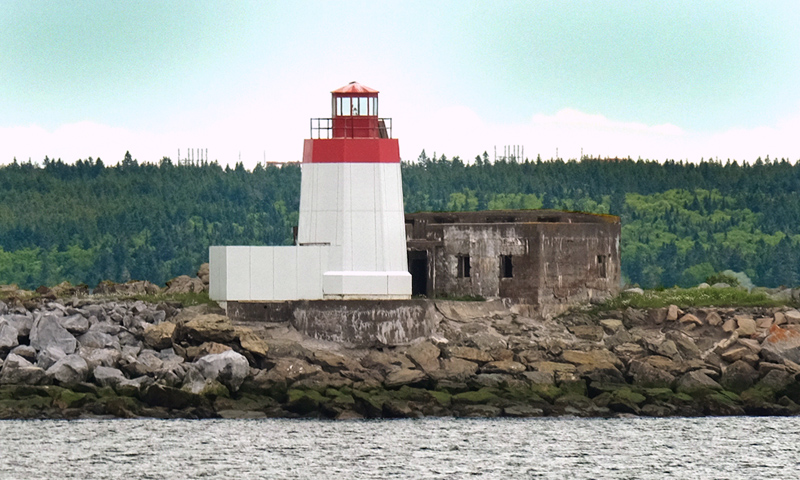 Work on the Courtenay Bay Breakwater was started sometime in the early twentieth century, and a 2,500-foot extension was completed in 1919. In 1927, an unwatched, white light was established at the outer end of the breakwater to show the entrance to Courtenay Bay. A year later, the light was moved 150 feet shoreward and re-erected on the breakwater.

The battery at the end of Courtenay Bay Breakwater was constructed during World War II to resemble, but not function as, a lighthouse. Rather, the guns at the battery were to engage any motor torpedo boats which might have been launched from a larger enemy vessel and to provide covering fire for a limited number of landing sites.

The battery was decommissioned after World War II and mostly dismantled in 1946. Today, a flashing red light is exhibited from the top of the battery's white, hexagonal tower.

In April 2018, the Canadian Coast Guard began work on installing aluminum siding and a lantern room atop the concrete lighthouse. These improvements will make the structure more visible, as will a planned upgrade to the light itself that will increase its brillancy by thirty to forty percent. Though most captains have GPS navigation systems, they still feel the breakwater lighthouse is an important feature for marking the harbour. The lantern room placed atop the breakwater lighthouse came from a decommissioned lighthouse.

For a larger map of Courtenay Bay Breakwater Lighthouse, click the lighthouse in the above map.

The lighthouses is owned by the Canadian Coast Guard. Grounds/tower closed.