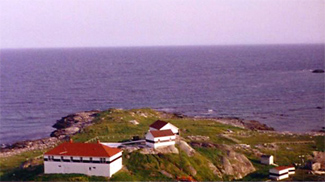 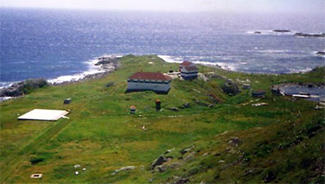 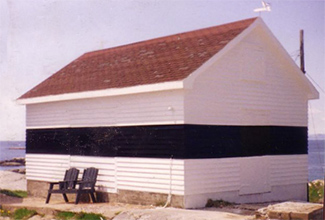 Pass Island lies just off the western tip of the peninsula that separates Connaigre Bay and Hermitage Bay. Captain James Cook noted that several English fishermen were using the island in 1763, with two families remaining over the winter. Known as a close-knit and successful fishing community, Pass Island resisted early offers of resettlement before finally being relocated, mainly to Hermitage, in 1974. In March of 1878, a Mr. Alexander presented a petition from George Penny and residents of Pass Island and other settlements in Fortune Bay, calling for the erection of a lighthouse on Pass Island. The House of Assembly concurred with the request and plans for the lighthouse were drawn up. A contract for the work was awarded, and the lighthouse was completed later that year. Its light, however, could not be exhibited until 1879 as the necessary materials did not arrive from Scotland in time.

The lighthouse consisted of a rectangular, two-storey dwelling, with a lantern room located on one end of its flat roof. The domed lantern room was fitted with triangular panes of glass and displayed a fixed white light from a fourth-order lens at a focal plane of eighty-six metres. Roughly four metres below the main light, a fixed red light was shown from the corner of the dwelling to mark the rocks and reefs extending from the Wolf Rocks, situated southwest of Pass Island. When John T. Nevill inspected the station in 1879, he steamed slowly round the Island to observe the effect of the double light, and then ran off in its line to note the distance at which the two lights merged into one. The lights were declared brilliant and effective, and the red light was found to answer the purpose of a danger warning.

T.W. Bulley was hired as the first keeper at Pass Island, and in 1885 Inspector Nevill noted: It is but due to the keeper, Mr. Bulley, to state that he may be regarded as our model Light Keeper. Every part of the Station, inside and out, was in equally good order. From the coal-store to the Light-room everything was uniformly and thoroughly clean.

While carrying oil to the main lantern room in 1889, Keeper Bulley slipped and fell against the lens, but the resulting damaged was judged to be not of a serious nature. Even though Keeper Bulley maintained the lighthouse in a most creditable manner, when Inspector Nevill removed a few suspicious clapboards in 1894, he was alarmed at the rottenness found beneath. The inspector reported the south and east sides are in very bad condition indeed, requiring new sills and uprights; that the north side is fairly good, and that the western one wants to have new eaves and other trimmings. These repairs are of urgent character, and should have early attention.

The needed repairs were made in 1895 by a carpenter who also found that the tower was decayed and unsafe. Due to the lateness of the season, the repairs to the tower were postponed until the following year.

In 1914, a one-storey, flat-roofed fog signal building and a keepers dwelling, both painted white with one black horizontal band around them, were erected on Pass Island. The fog alarm was powered by air compressed by an oil engine and would give one four-second blast every ninety seconds.

A new lighthouse, an octagonal, wooden tower with sloping sides, was constructed on Pass Island in 1917. The tower was attached to a one-storey, flat-roofed dwelling by a short covered way, and both structures were painted all white. The lighthouse continued to display a fixed red light below the main light in the lantern room.

William Carter was serving as the keeper of the fog alarm on Pass Island in 1921, with his son nineteen-year-old son Chesley as his assistant. By 1935, William Carter was retired but still living at the station, and Harry Carter, another of his sons, was now in charge of the station with his brother-in-law as his assistant. The 1945 census, shows that Harry was still keeper of the fog alarm, and his eighty-year-old father was still living with him and his family.

At some point, a large keepers dwelling, fog signal building, boathouse and other outbuildings, all painted white with a single horizontal black band, were built on Pass Island as shown in the photographs above. In 2011, a white skeleton tower continued to show a white light over a red light, but both lights were flashing instead of fixed. A fog alarm mounted on a skeleton tower is located on the southwest end of the island.

For a larger map of Pass Island Lighthouse, click the lighthouse in the above map.

Pass Island should be visible from the end of the road beyond Seal Cove.

The lighthouses is owned by the Canadian Coast Guard. Grounds open.