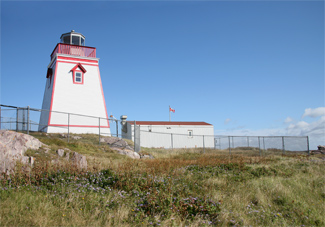 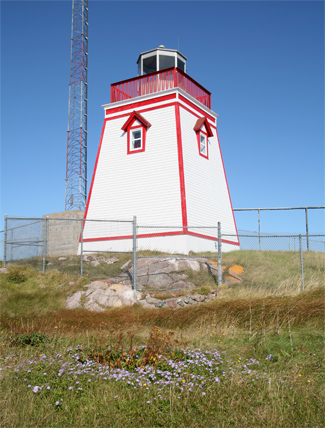 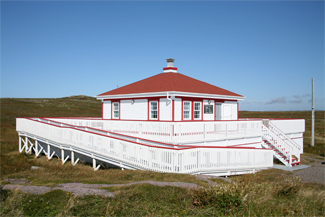 Just off the entrance to the harbour at Lamaline are a collection of dangerous shoals and islets that is purportedly how the community received its name. Lamaline is a corruption of La Maligne, a French term meaning malignant, evil, or wicked. Believed to have been settled in the late 1700s, Lamaline had a population of 263 in 1836, when the first official census of Newfoundland was taken. The settlement had different neighborhoods, including Church Side, Meadows, Muddy Hole, and Allans Island, which was an islet located just offshore. (The nearly 1 kilometre wide tickle between the island and the mainland was bridged by a causeway in the 1950s.) In 1877, a Mr. Ayre presented a petition to the Newfoundland House of Assembly from Josiah Darrel and other inhabitants of Lamaline, praying for a grant to erect a Beacon Light at Lamaline. Work on the erection of a lighthouse on Allans Island began in 1878, and when Inspector John T. Nevill visited the following year, he was glad to find that a very suitable site had been selected and judged that the light would be useful to the locality.

First lit in 1879, the lighthouse was a wooden, octagonal tower, with its sides painted alternately red and white. The tower displayed a fixed white, eighth-order dioptric light at a focal plane of 19.5 metres above the surrounding water. In 1883, work began on a small structure adjoining the tower that had a room for the keeper to sleep in. Keeper John Messervey passed away in September of 1885, and John Fleming was appointed in his stead.

Inspector Nevill noted in 1890 that a coal store combined with a porch had been built at the station, and that the floor of the dwelling needed to be reboarded. Complaints had reached the inspector that the light at Allans Island was poor, and his own observations confirmed that the light was not as good as that of similar lamps and lenses elsewhere. The inspector concluded that Keeper Fleming was not doing his job properly and warned him to be more careful.

The light on Allans Island was upgraded to a fourth-order dioptric light in 1911. The following year a set of range lights was established at Lamaline on the northern side of the harbour. Each light consisted of a red lens lantern hoisted atop a pole. The front light stood on the shore and had a height of 6.6 metres, while the rear light was situated 146 metres inland and had a height of ten metres. J. Hillier, Jr. was the first keeper of the range lights.

The octagonal tower on Allans Island was removed in 1916, after an iron tower and new dwelling were built at the station. The circular iron tower was painted with red and white vertical stripes to continue the stations daymark. A fog alarm, powered by air compressed by an oil engine, was established on Allans Island in 1920. The signal gave two blasts every ninety seconds in this manner: three-second blast, four seconds silence, one-second blast, eighty-four seconds silence.

In 1926, two enclosed square, pyramidal towers, and front tower and a rear tower replaced the pole lights used to indicate the proper alignment for entering the harbour.

A square, pyramidal, thirty-foot-tall, wooden tower was built in 1953 to take the place of the iron tower. A double dwelling was also built next to the tower for the keepers at the same time. The present tower was erected around 2004. A modern structure near the tower serves as the office for the current lighthouse keeper.

For a larger map of Lamaline (Allan's Island) Lighthouse, click the lighthouse in the above map.

From Route 220 on the southern shore of Burin Peninsula at Lamaline, turn south and drive 2.4 km (1.5 miles) to the end of the road, where you will find Lamaline Lighthouse.