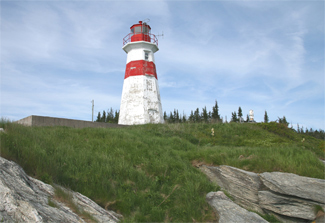 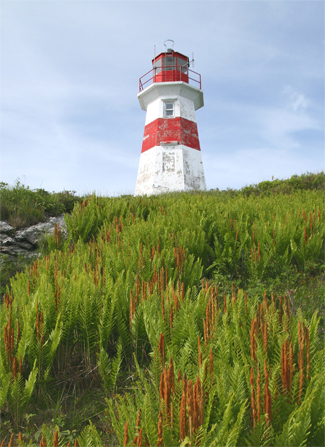 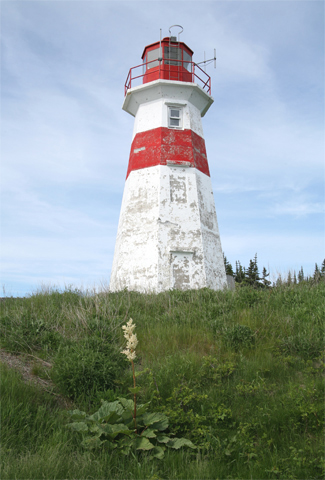 Musquash is an archaic name for a muskrat and is derived from the Abenaki word mòoskwas. Musquash Harbour is located just a few kilometers west of Saint John, and in 2007, the Musquash Estuary, which extends from the mouth of the harbour to the head of tides on the east and west branches of the Musquash River, was declared New Brunswicks first Marine Protected Area. The Conservation Council of New Brunswick nominated the estuary for protection in 1998, noting that the Musquash Estuary was the only one on the Bay of Fundy that had not been significantly altered and had its ecological function degraded. Now, the muskrats and other wildlife that frequent the estuary will benefit from twenty-seven square kilometers of habitat that will be protected from further development.

The cliffs of Musquash Head define the eastern side of the entrance to Muquash Harbour, and in 1878 Parliament appropriated $2,000 for a lighthouse on the headland to mark the harbour. A contract for the sum of $1,890 was awarded to David Currie, a carpenter from Upper Gagetown, for the construction of a keepers dwelling attached to a square, wooden tower, with a height of forty feet. The total cost of Musquash Head Lighthouse, also known as East Head Lighthouse, came to $3,271 - David Currie ended up being paid $2,125 and E. Chanteloup was given $921 for supplying the lantern, blinds, chimneys, and reflectors. Charles P. Hamm was the first keeper responsible for the catoptric light, which was elevated 112 feet above the high water mark, showed green to seaward and white into the harbour, and was first exhibited on February 15, 1879.

The village of Musquash, described in 1875 as having a sawmill, three stores, a hotel, and a population of 200, was the center of most commerce on Musquash Harbour. Just six years later, the village had five sawmills and had just received the service of the Grand Southern Railway.

In 1880, an automatic buoy was anchored roughly 1 ½ miles from Musquash Head Lighthouse to mark dangerous Split Rock, which had claimed numerous vessels over the years.

At some point around 1900 the characteristic of the Musquash Head Light along with the towers daymark were altered. A 1918 List of Lights states that the Musquash Head Lighthouse could be identified by a group of four flashes every thirty seconds and by the red and white horizontal bands on the tower  the tower was originally painted all white. The change from a fixed to flashing characteristic must have occurred before 1912, as in that year the lights clockwork mechanism was replaced by a new Reliance clock. In 1929, a modern revolving light apparatus with a motor drive and two 900-Watt generating units were installed at the station.

The present forty-seven-foot-tall hexagonal concrete tower was built in 1959, and a fog horn was added to the station in 1967 after the one at Tiner Point, five kilometers to the east, was discontinued. The lighthouse was automated in the early 1980s, and the last keeper left in 1987. Soon after, the two keeper dwellings were removed from the site.

July 21, 2008, was an auspicious day for the New Brunswick lighthouse community. While rain poured outside, guests gathered inside the New Brunswick Museum to witness the divestiture of Musquash Head Lighthouse and Greens Point Lighthouse from the Canadian Department of Fisheries and Oceans (DFO) to local community groups. Representing DFO Minister Loyola Hearn from Ottawa was Darren Gaudet, while locally DFO was represented by Jim McKinnon, who served as emcee. Also in attendance were local Members of Parliament Greg Thompson and Provincial Tourism Minister Stuart Jamison.

We have not yet determined what our exact plans for the property are, but we are committed to protecting the natural beauty of the site. To that end, we will retain control of approximately 12 acres of land directly around the lighthouse and we have agreed to place the remaining 98 acres into the trust of the Nature Conservancy of Canada (NCC). There are many examples where magnificent lighthouse properties have been opened to the public with little forethought and the end result is often huge parking lots congested with cars and recreational vehicles, gift shops and all manner of tourist trappings. Partnering with NCC is the first step in ensuring that Musquash Head never falls prey to that type of development. We intend to take a slow, methodical and environmentally responsible approach to any future development. We will consult with other groups and we will take the time to get it right. It may take awhile but the end result will be something that the people of the Fundy Region will be able to take great pride in.

Musquash Head Lightstation Inc. disbanded after its president moved away, and the lighthouse was left without a caretaker for many years until Explore Lorneville stepped in. Explore Lorneville partnered with the Nature Conservancy of Canada and took on a three-part project for Musquash Head. Musquash Head Lighthouse was painted in the fall of 2020 and will receive repairs in the future. Improvements have been made to multiple trails in the area, and a new trail has been built to connect all of the trails in the area.

For a larger map of Musquash Head Lighthouse, click the lighthouse in the above map.

From Route 1 west of Saint John, take Exit 112 and follow King William Road 8 km (5 miles) south to its terminus at Colson Cove Generating Station. At this point the road narrows and very shortly becomes a rough dirt road. Continue for 2.3 km (1.4 miles) until you see a red gate on your left; there is a parking area just before this. From there, a 1.2 km (0.9 mi) hike on a well maintained dirt road is required to reach Musquash Head Lighthouse.