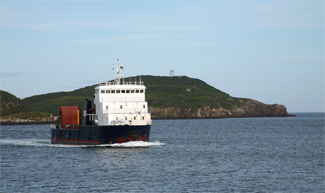 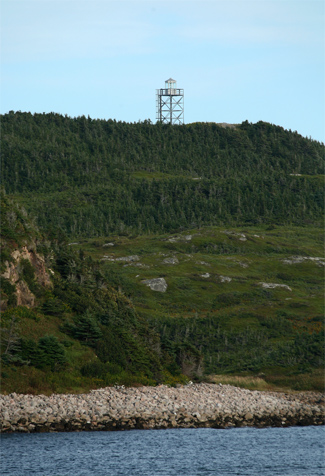 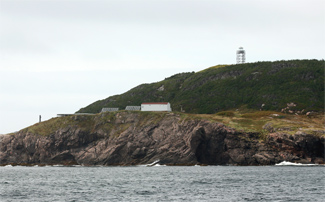 Burgeo is a small settlement on the southwest coast of Newfoundland, and a numerous collection of islands, known as the Burgeo Islands, litter the water just offshore. The easternmost of these islands is Boar Island, and it was atop the southern part of this island that a lighthouse was built in 1874. Messrs. Winser and Vallauce provided the materials for the lighthouse in 1873, and these were handed over the next year to Joseph Whiddon, who contracted to find the labor for building the structure. The lighthouse, a one-and-a-half-story rectangular dwelling with a square tower perched atop the southern gable of its peaked roof, was completed in the fall of 1874. Austin Oke departed St. Johns on September 18 for Boar Island to place the lantern on the lighthouse. This work was completed on October 31, and the light was put in operation on November 1, 1874 with Edward Dicks as its keeper. The lighthouse exhibited a fixed red light at an elevation of 240 feet above the sea using a single Argand burner inside the towers sixth-order lens.

Keeper Dicks lived on the island with his wife and two adopted daughters. Every Sunday, weather permitting, the family would travel by boat to Burgeo to attend the Anglican Church and socialize with friends.

In 1877, Inspector John T. Nevill noted that repairs had been made to the road that led from the landing cove up to the lighthouse and that a coal house and store had been erected. The inspector had great praise for the industry Keeper Dicks had shown in improving the station. The island was uninhabited until the Lighthouse was built four years since, Nevill wrote, and in that time land has been cleared, gardens made, and cows are kept.

Keeper Dicks kept his dairy cows in a barn on a lower part of the island, about a mile from the lighthouse. Twice each day he would milk the cows, and then place five-gallon containers of the milk in the icy waters of a spring about halfway up the hill to the lighthouse to cool. The milk would later be taken to the lighthouse, where it was slowly warmed so the cream would rise to the top. Once separated, the cream was churned by hand to make butter. Dicks would sell his milk to vessels, including the coastal steamer, which called at Burgeo.

Keeper Dicks was an industrious man, and besides his dairy farm, he pursued a variety of other interests. He would card wool then spin it and knit socks and mittens, and he also ran a fox farm. The foxes roamed freely on the island, but Dicks would put out pans of buttermilk from his dairy farm occasionally so he could count them. Poachers tried to profit from this venture by landing in small coves and placing traps for the foxes. When Dicks was apprised of this devilry, he trapped and skinned the foxes himself and got out of the business. Dicks also tried his hand at whaling and porpoise fishing. While he managed to kill a whale on his first voyage in 1880, a dear friend got his foot caught in the towline and was pulled overboard to his death. Dicks lost his ambition for further whaling after this tragic accident, but he continued porpoise fishing and was somewhat successful at peddling Edward Dicks Porpoise Oil Linament as a remedy for lumbago.

Keeper Dicks reported a failure of the foundation walls of the lighthouse in 1884, but before repairs could be completed, frosty weather came on, and props were put in place to support the building until a proper fix could be made the next spring. To provide an even surface for the lighthouses masonry foundation, the contractor had used boughs and root stumps to fill up the hollows in the ground to the level of the neighboring rocks. Inspector Nevill marveled that the foundation had lasted so long without settling and noted that this was yet another proof of the unreliability of contractors working without proper supervision. The rubbish was removed and the voids beneath the foundation filled with good masonry.

Boar Island Lighthouse was destroyed by fire in 1946. Arthur Hann was keeper at the time, and the fire was reportedly caused by a woodstove that overheated during the Saturday baking. A strong freeze fanned the flames, which quickly devoured the lighthouse. Residents at Burgeo noted the smoke and flames and helplessly watched as the structure burned to the ground.

In 1990, Boar Island Lighthouse was a simple pyramidal structure standing on the site of the original lighthouse. A keepers dwelling, other buildings, and a helicopter landing pad were located on a plateau below the light. A square, metal, skeletal tower was supporting the light on Boar Island in 2009.

Burgeo relied heavily upon coastal boat service that serviced the inhabited ports between Port Aux Basques and Fortune. This was the towns lifeline until a 146-kilometre-long road, known as the Caribou Trail, connected the area with the islands main highway.

For a larger map of Boar Island Lighthouse, click the lighthouse in the above map.

Boar Island Lighthouse can be seen from the ferry landing in Burgeo, but better views are possible from the Burgeo-Ramea Ferry.