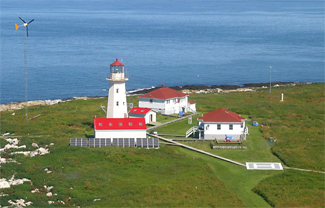 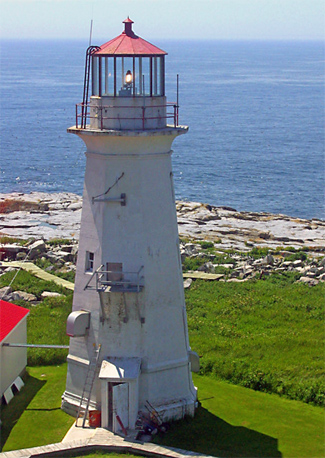 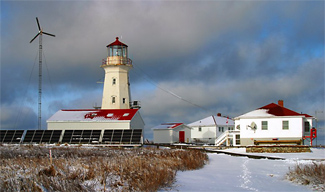 As tiny Machias Seal Island is located roughly 19 km (12 miles) from the nearest points in the United States (Cutler, Maine) and Canada (Grand Manan Island), it is understandable that both countries have claimed sovereignty over the island. In terms of navigation, the island was more crucial to Canadian interests, as vessels bound to and from the important ports of Saint John and Saint Andrews frequently passed nearby, but the United States was reluctant to relinquish control of the associated prime fishing grounds. In response to the continued petition of the Chamber of Commerce of Saint Andrews, the government of New Brunswick allocated 750 pounds in 1831 to build a lighthouse on Machias Seal Island provided that such lighthouse could be distinguished from any other lights in the vicinity. (Earlier lighthouses had been constructed nearby at Head Harbour on Campobello Island in 1829, and on Gannet Rock in 1831.)

Two octagonal wooden towers and a keepers dwelling were built on the island in 1832, and John Pendlebury was paid an annual salary of 130 pounds to serve as the first keeper. The two lights, each of which was made up of eight lamps set in 23-inch reflectors, prevented confusion with the revolving light at Gannet Rock and the fixed light at Head Harbour. During 1857, the lights were fueled by 700 gallons of seal oil and 207 gallons of porpoise oil, which was more expensive but had to be used in cold weather. In 1840, it was noted that Keeper John Conley was an excellent pilot and had a cow, garden, and every comfort on the island. As Conley would frequently board vessels and pilot them to Saint Andrews, leaving his wife in charge of the lights, it was recommended that he should be required to hire an assistant.

As Machias Seal Island was located in the center of a shipping channel and was frequently shrouded in fog in the summer season, the keeper was supplied a four-pound signal gun and a supply of powder in 1841 to serve as a fog signal, though the installation of a large alarm bell was recommended. A pattern of firing the gun every two hours during low visibility was later established. In 1843, a supply of provisions was stored on the island and an 800-gallon tank was erected to store rainwater for the use of shipwrecked Seamen and Emigrants.

Major work was carried out at the station in 1856-1857, including repairs to the towers stone foundation walls, lanterns, and decks, new shingling for the towers, and repairs to the dwelling and barn. A six-pounder signal gun with a house and platform was also installed during that period along with a new flagpole. By 1869, one of the two towers was worn out, and Messrs. Clarke and Stackhouse were contracted to construct a new tower at a cost of $2,450. The light from a powerful third-order Fresnel lens was first exhibited from the new lighthouse on November 6, 1869. Though the brighter light was appreciated, it also created a problem. Mariners would often see only the brighter of Machias Seals two lights, or would see two lights but think the dimmer of the two lights was from the keepers dwelling, and would thus conclude they were off West Quoddy, where a single third-order light was displayed.

A steam fog-whistle, the most powerful one then on the Bay of Fundy, was established on Machias Seal Island in 1873, with James Ackroyd as its engineer. The following year brought an end to John Conleys thirty-plus years of service on the island, along with the much shorter service of James Ackroyd and his replacement J.H. Crosby, who resigned after just six months because his family was unwilling to reside on the island. Wright Edmonston was then placed in charge of both the fog signal and the lights, but he left the island after a year when the Marine Department refused to grant him a considerable increase in salary. Marine Agent John H. Harding made the following report to the department after his visit to Machias Seal to remove Edmonston and deliver the new keeper, Alexander Eddy. I regret to say that I found this station in a very unsatisfactory condition. The keeper, being a slovenly and untidy person, had allowed the whole station and its appurtenances to present a very neglected and disorderly appearance. The boiler had been burnt and was leaking badly.

A railway track was placed on the island to link the coal shed adjoining the fog alarm building with the landing area. A one-inch rope connected to machinery in the engine-house powered the railway car, which could carry two to three tons of coal each trip. The Marine Agent noted that the time saved in one offloading fully compensated for the outlay to establish the railway. During heavy storms, the sea would at times wash over the island, causing damage to the railway as large drift lumber was caught under the rails. The tramway had to be repaired every couple of years even after the original wooden one was replaced with a 210-foot-long iron tramway in 1896.

Eight years after the new tower commenced operation, a contract was awarded to George Armstrong in 1877 to construct a new companion tower. Unfortunately, the Chance Brothers Fresnel lens intended for the new lighthouse was destroyed in a great fire at the departments warehouse in Saint John on June 20, 1877. A new lens was ordered from the same establishment, and the new lighthouse, an octagonal tower situated sixty-four yards southeast of the west tower and standing fifty-three feet from base to vane, commenced operation on November 1, 1878. The total cost of the lighthouse, including the tower, lens, and lantern was $6,807.40. Mariners were alerted that the new towers, when brought in range, led 4 ¾ miles south of the Murr Ledges, while the former lights ranged with the ledges.

In 2012, Margaret Armstrong, George Armstrong's great-granddaughter, was living next to her great-grandfather's home and had in her possession the original plans for the 1877 lighthouse along with correspondence relating to its construction. According to Margaret, the lumber for the lighthouse was cut from George Armstrong's land in French Lake, shipped to Saint John, and from there was transported to Machias Seal Island.

In 1914, a type G diaphone fog alarm with a class E duplicate plant was installed in lieu of the steam fog whistle. The following year, an octagonal, sixty-foot-tall, reinforced concrete tower, the one that remains in use today, was erected near the middle of the island, and it commenced displaying a flashing white light. No longer needed, the two wooden towers were demolished.

A new dwelling was built on the island in 1923 for the keeper, allowing the older dwelling, which had been housing both the keeper and his assistant, to be remodeled for the assistant. The two dwellings on the island today are of more recent origin.

In 1944, the government of Canada adopted an order declaring Machias Seal Island and the surrounding waters a bird sanctuary. The island is home to the largest nesting colony of Puffins on the Atlantic Coast south of the Gulf of St. Lawrence.

In 2016  2017, the old coating was removed from the tower on Machias Seal Island and a new waterproof one was applied.

Newfoundland and British Columbia are the only two Canadian provinces that still have staffed lighthouses with one exception, Machias Seal Island. Though Machias Seal Island Lighthouse has been automated for several years the Department of Foreign Affairs covers the Coast Guards costs of maintaining keepers on the island for sovereignty purposes. The keepers work on the island on a rotational basis, a new pair being flown in every twenty-eight days. Besides the keepers, a warden lives on the island to keep watch over the visitors who come to see the puffins on ten-acre Machias Seal Island.

For a larger map of Machias Seal Island Lighthouse, click the lighthouse in the above map.

The island can be visited on Puffin Trips offered by Bold Coast Charters out of Culter and Sea Watch Tours out of Grand Manan, Canada.

The lighthouse is owned by the Canadian Coast Guard. Grounds open for tours.


It was an extremely foggy day when we went out to Machias Seal Island. When we arrived at the island, we could not even see the lighthouse! Later, the fog lifted a little, and we were able to get a filtered view of the structures on the island. On our way out to the island, our captain had to cut the engines and make a sharp maneuver to avoid running over a lobster boat that suddenly appeared from out of the fog. We definitely go a firsthand lesson on how dangerous navigating in the fog can be. Due to "rough seas" we were unable to land on the island, but it was still fun to see the Puffins.