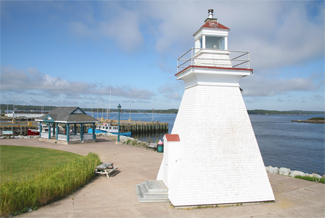 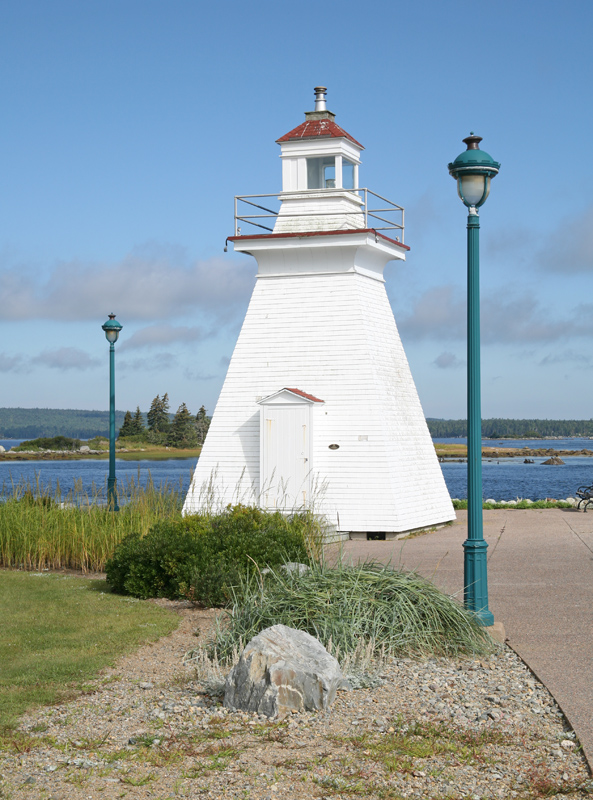 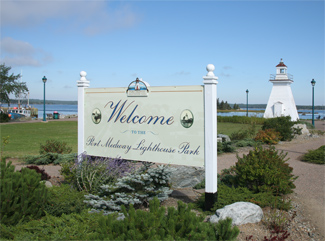 Port Medway is situated near the mouth of Medway River, a significant waterway that extends inland for many kilometres. Loyalists from Massachusetts settled Port Medway in the mid-eighteenth century and established significant logging, shipbuilding, and fishing industries. At its peak, Port Medway boasted six wharves and a population of over 5,000, but when the industries declined, so did the population.

A lighthouse was established on the headland forming the western side of the entrance to the outer harbour at Port Medway in 1851, but as mariners still had a significant way to travel to reach the wharf, another lighthouse was eventually built closer to town.

The Annual Report of the Department of Marine and Fisheries for 1899 chronicles the establishment of the second lighthouse near Port Medway:

A lighthouse established on the eastern end of the breakwater in Port Medway harbour, on the south coast, was put in operation on April 1, 1899.

The lighthouse is a square wooden tower, with sloping sides, surmounted by a square wooden lantern, the whole painted white, and is 33 feet high from its base to the vane of the lantern.

The light is fixed red, elevated 31 feet above high-water mark and visible 6 miles.

The illuminating apparatus is dioptric of the seventh order.

The lighthouse on Medway Head was known as Port Medway Lighthouse until that name was transferred to the tower built on the wharf at Port Medway in 1899. Thereafter, the structure marking the western side of the entrance to Port Medway Harbour was known as Medway Head Lighthouse. Samuel T. Foster was appointed the first keeper of Port Medway Lighthouse on February 17, 1899, at an annual salary of $100. The towers final formal keeper was George McConnell. He started at a salary of $150 in 1942, but by the time he retired on October 7, 1959, he was making $345. Cecil Dolliver then served as a caretaker of the lighthouse, being compensated $40 each year, until 1967.

The lighthouse was covered in vinyl siding in 1979 and decommissioned a decade later on January 4, 1989.

Four years after the lighthouse went dark, so did the nearby fishing plant. The two decaying structures served as reminders of Port Medways once thriving fishing community, but were starting to become a blight for the community.

Deciding the lighthouse was an important part of the areas marine heritage, the Medway Area Communities Association set out to save the tower in 1998. In July 2000, the Municipality of Queens purchased the lighthouse on behalf of the association, and after a $602,000 facelift of the lighthouse and its surroundings, the new Port Medway Lighthouse Park was opened in October 2002 complete with walkways, gardens, and a bandstand/picnic pavilion.

On hand at the parks opening ceremony was ninety-two-year-old Kate Armstrong, niece of Keeper George McConnell. Kate Armstrong related that her two girls would climb the tower with Keeper McConnell. I never went up to the top though, she admitted. I was too afraid!

The park will provide benefits for both the community and the visitor, said Jill Cruikshank, special projects coordinator for the Regions of Queens Municipality. Community groups will be using the park for fundraising events and general recreation, whilst the tourist can enjoy a scenic spot with a preserved lighthouse in its original location.

For a larger map of Port Medway Lighthouse, click the lighthouse in the above map.

The lighthouse is owned by the Municipality of Queens. Grounds open, tower closed.