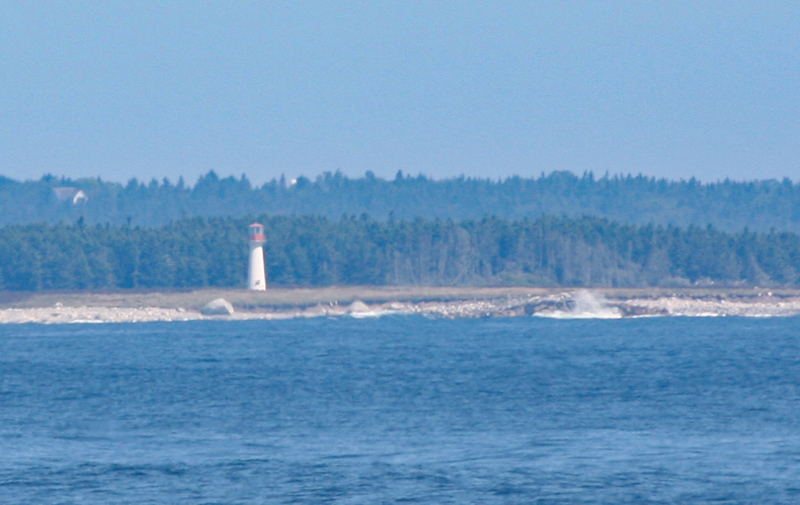 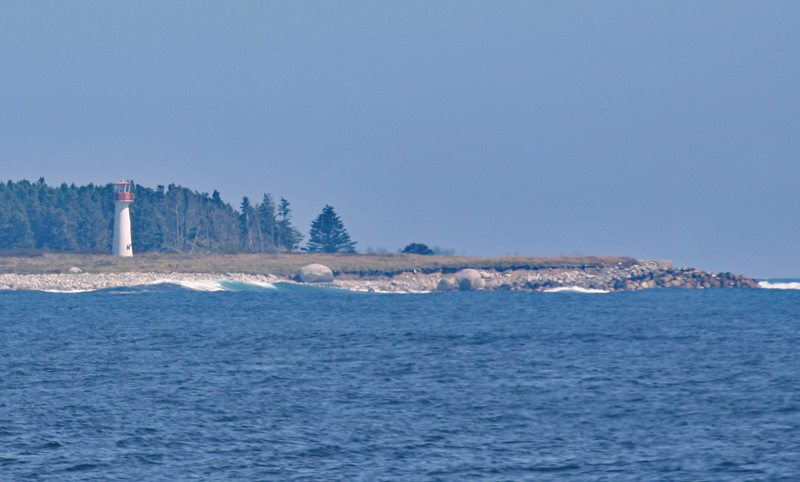 The name Coffin Island makes one think the island must have been the burial ground for the victims of an early shipwreck, but the island was simply named after Peleg Coffin, one of the founding settlers of Liverpool. The first light on the island, which had earlier been called Bear Island, was completed in 1812 and was known as Liverpool Light until 1888. The House of Assembly of Nova Scotia appropriated 500 pounds in 1811 for a lighthouse on the southwest end of the island at the entrance to Liverpool Bay. Simeon Perkins, a seventy-five-year-old Liverpool town official, wrote the following about a trip he made to the island on June 26, 1811 to inspect the beginning of the work:

They have dug for the foundation...there is a kind of Moss & turf on the surface then about two feet deep comes to a hard panwhich I think will be a good bottom to Build the Foundation upon  It is about 90 feet from the Sea Wall...at present the distance is very well but there may be Some danger (as the wood is Cut away) of the Sea wearing away the Land in time.

How prescient Perkins words proved to be, as in 2006, the second Coffin Island Lighthouse had to be demolished after being undercut by the sea.

Perkins had the privilege of returning to the island in July 1811 to lay the first stone for the foundation of what would be just the fifth lighthouse built by the Province of Nova Scotia. Under the direction of James Leslie from Shelburne, a wooden octagonal tower rose to the height of fifteen meters and a keepers dwelling was completed nearby. In 1814, a committee appointed to examine the accounts of the commissioners in charge of overseeing the building of the lighthouse were rather shocked at the very high price at which a great part of the Articles supplied are charged, and the want of economy in almost the whole of the expenditure. Needless to say, the cost of the lighthouse ending up being much, much more than the original 500 pounds set aside for it.

A report on the provinces lighthouse in 1833 noted that the lantern room was so leaky that the keeper had to have a number of tubs scattered around to catch the water. The keepers dwelling was described as an old crazy building, that was first put up in Liverpool, then taken to pieces, transported to the island, and raised a second time. Immediate attention was needed as the house leaked and the roof was almost ready to fall in.

Four horizontal red bands were added to the white tower in 1841 to give it a more distinctive daymark. In 1871, a gun, likely a twenty-four-pound iron carronade, was sent to Keeper Thomas Eaton on Coffin Island so he could fire it in response to signal guns from steamers and other vessels during thick or foggy weather. The following instructions on firing the gun were later given to the keeper at Coffin Island:

In foggy weather the keeper will pay attention to fog-signals which may be made off the coast within hearing of his Station, and will discharge the gun in reply, and will continue firing in response to such signals (if continued) at intervals of ten minutes. When the vessel making the signal has, in his judgment, passed seaward or safely entered the port, he will cease firing. A record is to be kept of the date and time of signals made and to what signals they were in reply and the number of discharges on each occasion.

Keeper Eaton drowned on October 7, 1872 while attempting to cross from the island to the mainland. Mrs. Eaton cared for the light with the help of an assistant until the keeper of Little Hope Island Lighthouse was transferred to Coffin Island on November 30, 1872.

A report on the lighthouse in 1874 noted that the sea was steadily wearing away the southwest tip of the island. The construction of a protective work, about five feet high and over one hundred feet long, was recommended during the following year. It appears, however, that nothing was done, as in 1877 the following note was made: Something should be done to protect the embankment, which is falling away every year.

The original lighthouse was lost on June 19, 1913 when lightning caused a fire that claimed the tower and keepers dwelling. A light was shown from a temporary tower until a new lighthouse was finished in October 1914. D.C. Mulhall of Liverpool was paid $12,080 to build the forty-foot-tall tower out of reinforced concrete, and E.J. Geizer received $1,064 for erecting an eight-foot cast-iron lantern room atop the tower and for installing a single-flash, long-focus reflector.

Electricity reached the station in 1962, allowing the light to be automated and Wallace Wentzell, the final keeper, to come ashore. 150 years of lightkeeping on Coffin Island had come to an end. No longer needed, the keepers dwelling was demolished.

In 1991, the buffer between the lighthouse and the sea had been whittled down to just two metres. By 1998, an eighth of the base of the tower had been undermined. The Canadian Coast Guard announced plans to replace the light by a buoy and demolish the tower, which was a safety hazard. Alarmed by the potential loss of their beloved lighthouse, locals quickly formed the Coffin Island Lighthouse Heritage Society in the summer of 1998 and managed to get a one-year reprieve on the demolition so it could develop a plan to save the lighthouse.

The society considered moving the lighthouse but instead opted to spend $70,000 to place giant granite boulders along roughly seventy-metres of the shoreline to prevent further erosion. The stone armour was all in place by August 1999 and managed to fend off the sea for a few years, but by 2006, many of the granite blocks had been dislodged and the tower was severely undermined. A new fibreglass tower was erected on Coffin Island, 330 feet from the shore, in October 2006, and the concrete tower was demolished. Coffin Island Lighthouse continues to mark the entrance to Liverpool Bay by eastern approaches, while the western approaches are marked by Western Head Lighthouse.

Located on the southeast point of Coffin Island, marking the eastern side of the entrance to Liverpool Harbour.
Latitude: 44.033639, Longitude: -64.628278

For a larger map of Coffin Island Lighthouse, click the lighthouse in the above map.

Coffin Island is best seen by boat or from the air, but distant views are available from Moose Harbour, north of Western Head Lighthouse.