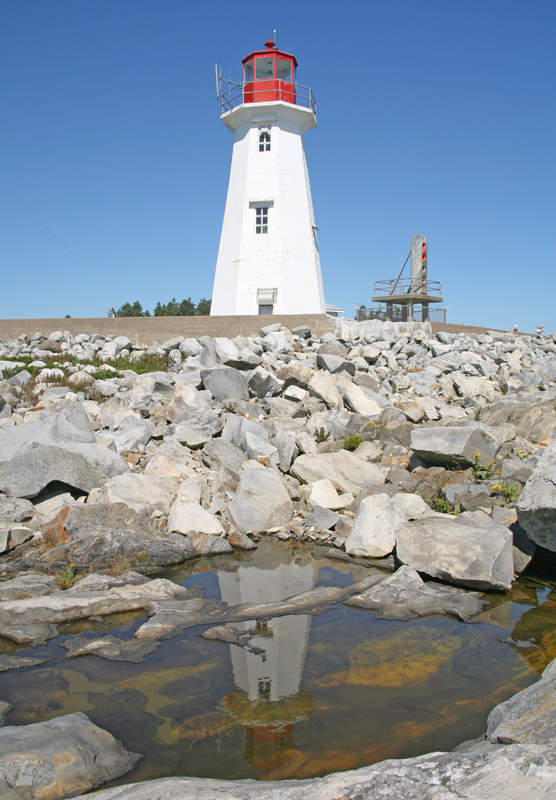 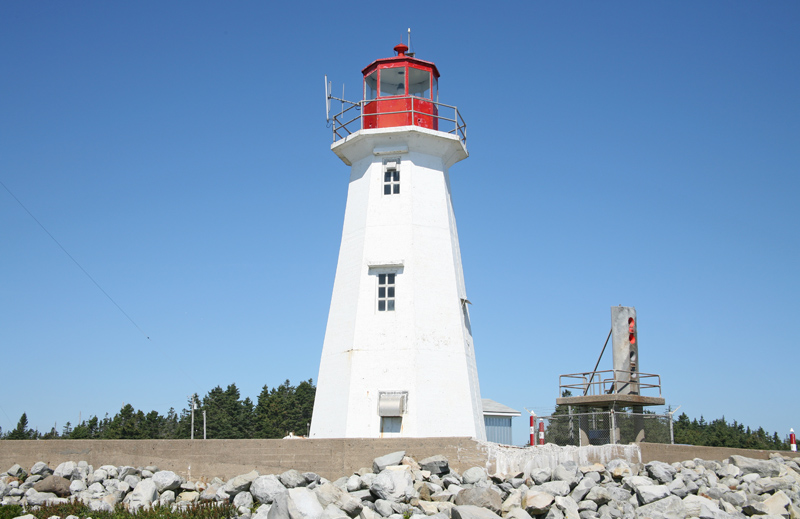 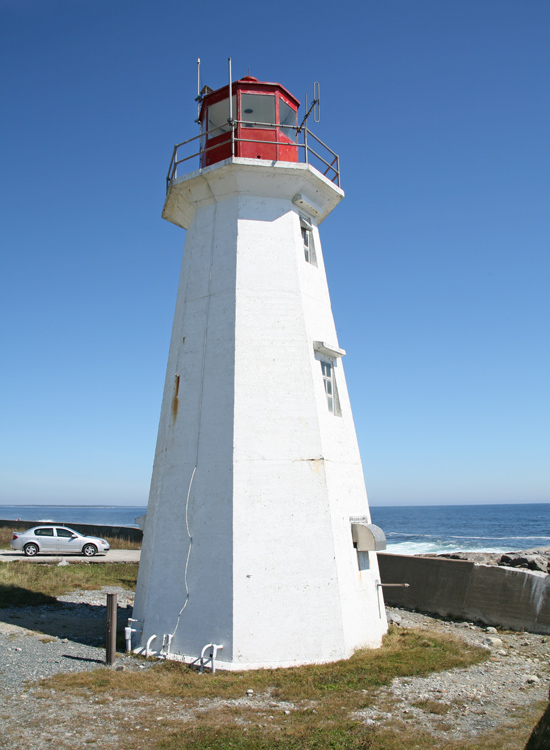 While Western Head Lighthouse was not built until 1962, there has been a foghorn on the point since 1924. The white octagonal concrete tower stands 19.5 meters tall, is topped with a red lantern, and exhibits a flashing white light. As indicated by its name, the lighthouse is situated along the western approach to Liverpool Bay, while Coffin Island Lighthouse marks the eastern approaches. Boehners Ltd. erected the fog alarm building along with a dwelling and an oil store under contract in 1924, and the fog alarm was placed in operation on October 1 of that year by Avery Covey, who had previously been keeper of Flint Island Lighthouse. The diaphone foghorn sounded two blasts each minute, when necessary, in this manner: two-and-a-half-second blast, five seconds silence, two-and-a-half-second blast, fifty seconds silence. Lemuel Moreau, the last keeper of the Western Head Lighthouse, said that it was so powerful that it shook and rattled dishes in the cupboards of houses in the area.

In 1936, the ell was removed from the back of the fog alarm building, and a radio room was built in its place to control the radiobeacon that was established that year at Western Head. The station would eventually have three dwellings, one for the head keeper and his family and two for the assistant keepers.

Lighthouse keeper and author Chris Mills stopped by Western Head in the early 1980s and met Lemuel Moreau, who gave him and his father a tour of the station. Chris Mills describes the visit in his book Lighthouse Legacies: Stories of Nova Scotias Lightkeeping Families.

We met the keeper, Lemuel Moreau, and he took us to into the big, rambling foghorn building. Lemuel had the whole place painted up  from the white ceilings, to the high-gloss, battleship-grey floors. He explained how he reported the weather, and logged the Coast Guard helicopters trips to his lighthouse for fuel.

Everything was immaculate and in its place  even the wrenches had hooks and little outlines drawn on the wall so youd know where they belonged. On that day, Lemuel symbolized for me the pride and attention to detail that marked his profession, even after most of his duties had been taken away by automated equipment.

By 1988, even though Lemuel was still on the station, the whole kit and kaboodle was monitored from afar. If he wanted to get into the tower, he had to call the keepers at Cape Forchu to disable the intrusion alarm. He didnt even have to climb the lighthouse tower to clean the lantern windows or squeeze a little oil into the lights rotating mechanism.

Lemuel told me at the time, I don't know what its working like now. I haven't been up there... and he trailed off, trying to remember just when it was he had last been up in his lighthouse.

Today, the light is still there, lens-turning 24-7. All thats left of the old foghorn building is a concrete pad, with no trace of the high-gloss paint. The fog detector, the backup engines, the radios, everything is now stuffed into the lighthouse, which stands as the only reminder that this is indeed a light station.

While you are at Western Head be sure to look across the entrance of the harbour to see Coffin Island Lighthouse.

For a larger map of Western Head Lighthouse, click the lighthouse in the above map.

From Route 103, take Exit 19 south to Liverpool. After crossing over Mersey River, turn left onto Main Street. Go one block, and turn right onto School Street. Western Head Lighthouse signs are present. After 1.2 km (0.8 miles) on School Street, continue straight on Shore Road 6.4 km (4 miles) to Breakwater Road. Turn left onto Breakwater Road, and continue 0.8 km (0.5 miles) to the end of the road, where you will find Western Head Lighthouse.