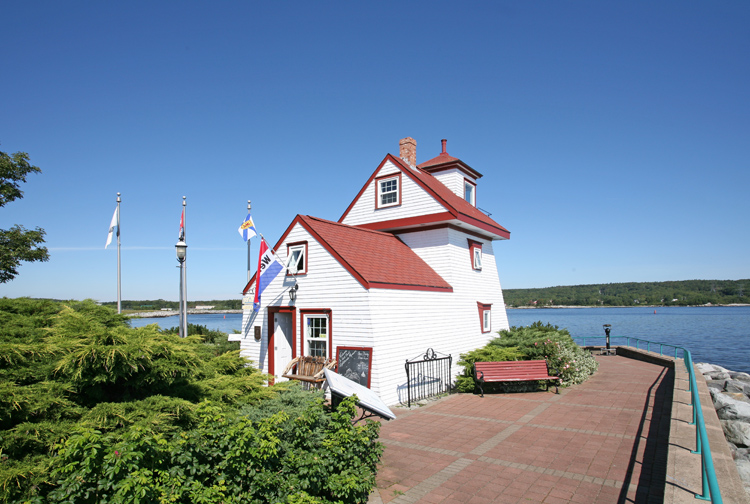 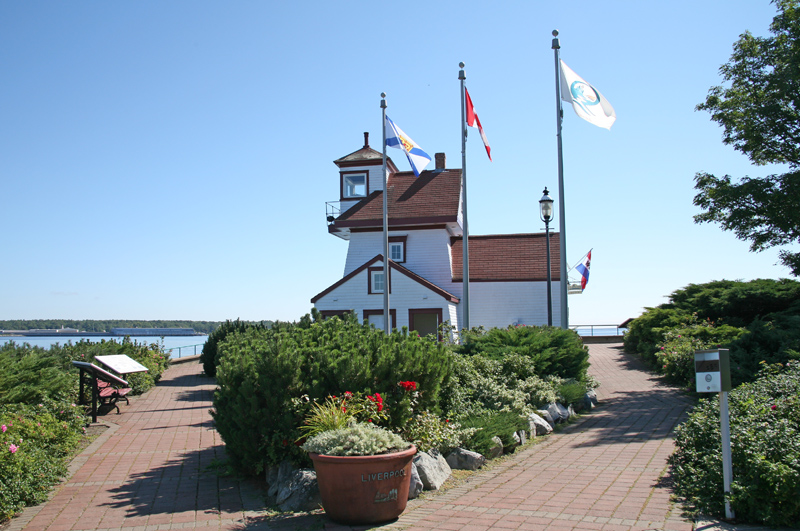 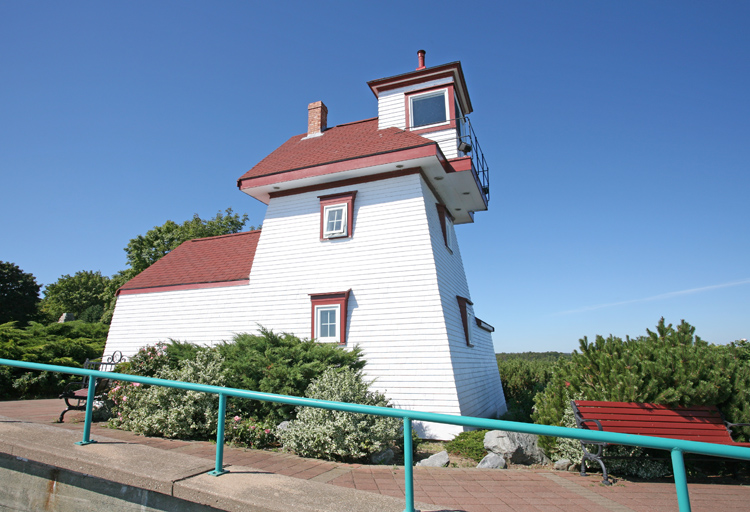 Located on the southern shore of Liverpool Bay, the hunchbacked Fort Point Lighthouse has been helping vessels navigate through Liverpool Harbour and into Mersey River since 1855 and is the third oldest surviving lighthouse in Nova Scotia. A lighthouse had been established at Coffin Island, at the entrance to Liverpool Bay, in 1815, but the booming timber trade demanded another aid be constructed to make navigating Liverpool's harbour easier and safer by day or night. An 1855 petition by merchants, shipmasters and other inhabitants of Queens County persuaded the Nova Scotia legislature to erect a harbour light for Liverpool. The original Fort Point Lighthouse consisted of just the small square front portion of the present structure and was described as of the greatest importance to the trade of the port. Two catoptric lamps, with reflectors, and one Argand lamp, without a reflector, were originally used in the lantern room to produce a fixed white light. The lantern room had three windows, one that faced up the river, one that looked across the river, and one that faced Liverpool Bay. After visiting the lighthouse in 1857, William Condon, Inspector of Lighthouses for Nova Scotia, noted that the building was entirely too small as there was scarce room for the people in charge to sleep in.

The early keepers had only a small room on the second floor to use as a residence as the top floor was devoted to the light, and supplies were kept on the ground floor. The cramped quarters prompted Samuel Sellon, the first keeper, to live in town, but subsequent keepers resided in the lighthouse. A "porch" for storing oil and supplies was finally added to the lighthouse in 1878, producing a rather unique architectural design.

Keeper Sellon earned £50 per year and was given £10 for fuel. His wife or daughters must have helped care for the light as in 1859, William Condon recommended that a fence be placed around the lighthouse to prevent it from being defaced and for the protection of the females who attend to the light. The station was a very public one, being right on the edge of town.

Keeper Sellon was in charge of the light until 1888, and he was followed by just three other keepers. Archibald Campbell was the keeper from 1888 to 1896. John Misener served from 1896 to 1936, longer than any of the stations other keepers, and James McLeod was keeper from 1936 to 1951.

A kitchen was built onto the side of the lighthouse around the turn of the nineteenth century. In 1901, Keeper Misener was given a hand foghorn to answer the fog signals of vessels, and his salary was also increased to account for this extra work. During World War II, the already cramped quarters became even more cramped for Keeper McLeod when weather forecasters took over a room in the lighthouse. In 1944, Keeper McLeod wrote, this room we gave for them (for 1 month only) was not a spare room but the only room we had to use ourselves as living quarters. The results, we (a family of five) have been living in a small kitchen for the past four years.

Seal oil was first burned in the lamp, followed by kerosene oil, which was used until the light was electrified in 1951. The light was discontinued in 1989. A drum Fresnel lens that replaced the original system of lamps and reflectors can be viewed in the lantern room.

When the lighthouse was slated to be demolished by the federal government, the Town of Liverpool stepped in to care for its beloved landmark and took possession of the lighthouse and surrounding land in 1970. Located in what is now known as Fort Point Lighthouse Park, the lighthouse was opened to visitors starting in 1997.

Lanes Privateer Inn partnered with the Region of Queens Municipality to keep Fort Point Lighthouse open to the public during the summer from 2017 through 2020. During that time, a small café operated in the lighthouse that offered pastries and drinks, and even lighthouse picnic lunches that could be enjoyed on the picnic tables in the adjoining park. The picnic lunches were packed in a wooden crate and came with cloth napkins, porcelain dishes, and silverware. Visitors could choose from selections that included lobster rolls, a variety of sandwiches on house-made breads, market salads, blueberry lemonade, and fresh desserts.

When the municipality issued a Request for Proposals in January 2021 to operate the lighthouse over the next three seasons, only Queen's County Museum applied. The museum plans to use the lighthouse as a gift shop and exhibit space.

From Route 103, take Exit 19 south to Liverpool. You will shortly join Route 3 (Lighthouse Route), which will cross over Mersey River. As you enter the downtown area after the river, turn left onto Main Street and follow it to its end at Lighthouse Park.

The lighthouse is open daily from June 1 to September 1 between 9:30 and 5:30. After Labour Day, it is open on weekends from 10 to 5 through Canada's Thanksgiving. You can climb to the light and enjoy various lighthouse memorabilia. Be sure to ask for an Explore Our Lighthouses map, which notes the locations of the seven lighthouses located in Queens County and the best viewing locations for the offshore lights. On clear days, one can see Coffin Island Lighthouse in the distance from Fort Point Lighthouse.

During the summer, you can order Lighthouse Picnic Lunches and enjoy them on a picnic table in the adjoining park.

The lighthouse is owned by the community of Liverpool. Grounds open, tower open in season.