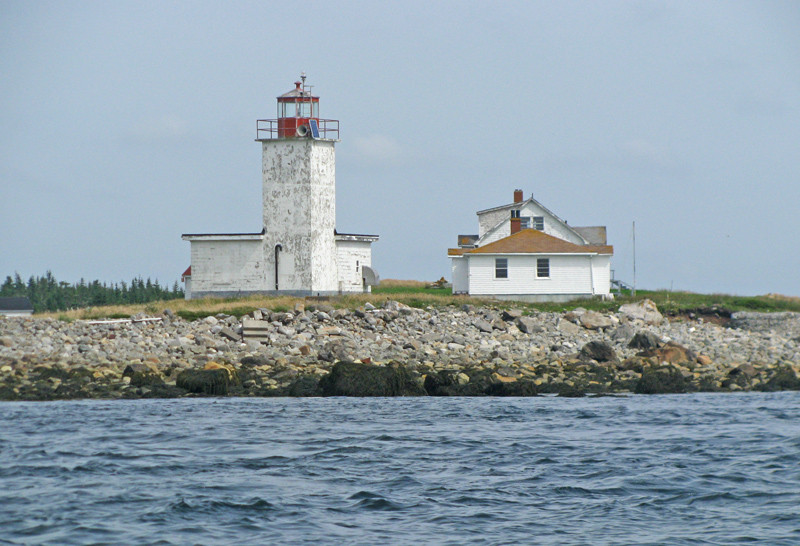 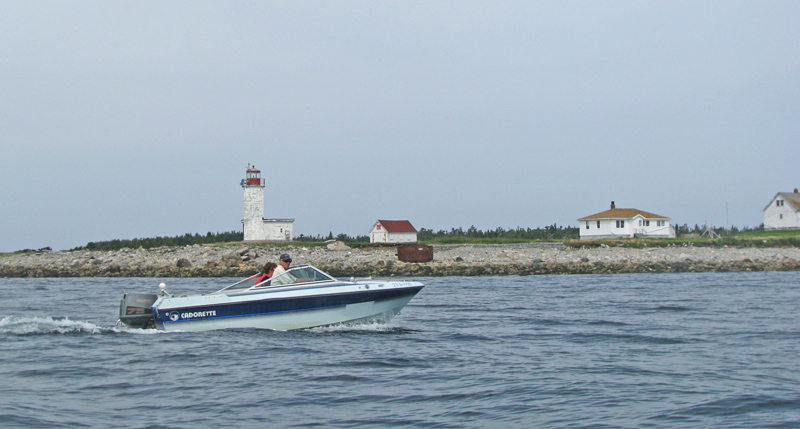 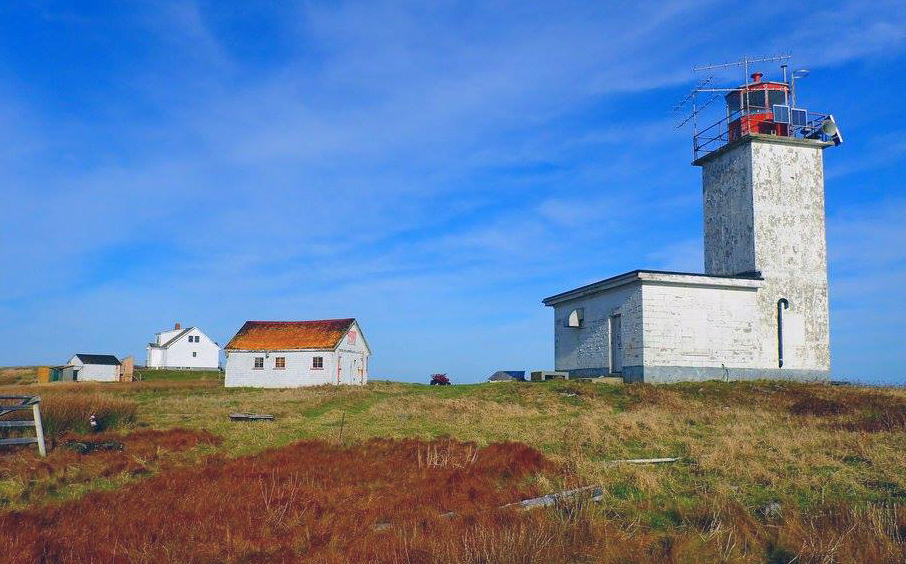 Bon Portage Island, known locally as Outer Island, lies just a few kilometres off Shag Harbour, and is situated between Cape Sable to the east and Seal Island to the west. The first Bon Portage Lighthouse was constructed in 1874, and the Annual Report of the Department of Marine and Fisheries for that year provides the following information on the station.

Bon Portage Lighthouse, erected during the present year, is situated on the south point of Bon Portage Island, in Shelburne County. The tower is a square wooden building 28 feet high, and painted white. It is surmounted by an iron lantern 7 ½ feet in diameter, with ten sides, glazed with plate glass 36 x 28 inches.

The lighting apparatus consists of four circular-burner lamps with 20-inch reflectors, and two flat-wick lamps with 18-inch reflectors, placed on two frames, the four circular lamps on the lower and the two flat-wick on the upper; they are arranged so as to form two triangles, having two circular lamps at the base and one flat-wick lamp for the apex, and these three lights coming into focus together produce a brilliant and powerful effect. Three spare lamps are on hand.

The light is a revolving red, showing a flash every minute, and making a revolution every two minutes. It is elevated 46 feet above high water, and will probably be seen in clear weather a distance of 12 miles. The light is to guide vessels into Barrington, West Bay and Shag Harbour. 315 gallons of oil were delivered at this station, and three galvanized iron oil tanks. The dwelling for the keeper is attached to the light tower, and an oil-store 12 x 16 feet has also been erected; a boat 13 feet long is supplied, and a well has been dug on the premises. Next year a landing will have to be constructed, and a road from the light-house, about half a mile long. The two will probably cost $200.

Mr. Arthur Wrayton was appointed keeper at a salary of $350, and the light was put in operation on 25th November, 1874.

Henry Chute was paid $1,755 for building the lighthouse and $225 for the oil store, while E. Chanteloup provided the lantern room and lighting apparatus for $1,761.29. The total amount expended on building the station was $3,920.69.

The brand-new lighthouse was found to leak so badly that the clapboards were torn off and shingles were applied instead in 1875. To complete the station, a 1,200-metre-long road was built between a landing on the east side of the island and the lighthouse, and a boat slip with a breakwater to protect it was built at the landing in 1876. Two years later, the road was improved by building three one-hundred-foot-long sections of corduroy road to span swamps. Culverts were placed where necessary to allow water to pass beneath the road. To provide proper drainage, the road was also rounded in the middle and lined with two-foot-deep ditches on each side.

The illuminating apparatus atop the lighthouse was improved in March 1915 through the installation of a fourth-order Fresnel lens. The characteristic of the light was changed at this time from a flashing red light to an occulting white light that was on for seven seconds and then eclipsed for three seconds.

In 1926, Morrill Richardson purchased all of Bon Portage Island except for the lighthouse reservation. That same year, he married Evelyn Fox on nearby Stoddart Island, where Evelyns maternal grandfather had served as a light keeper. Lightkeeping was soon to be in Morrills future too. Upon the recommendation of Evelyns brother, Ashford, Morrill applied to be keeper on Bon Portage and received his appointment to that position in 1929.

Morrill and Evelyn, along with their baby daughter Anne, relocated to the island, where the couple would spend the next thirty-five years of their lives. In 1945, Evelyn published the novel We Keep a Light, which detailed the island life lead by the Richardson family, which had grown to include three children. The book won the Governor Generals Medal for creative non-fiction and prompted some readers to visit the island.

During the period chronicled by Evelyn, the island had no electricity, but what was needed more in her opinion was a means to communicate with the mainland in case of an emergency. Just a year after the book was published, electricity arrived on the island, along with a radiotelephone.

Anne Richardson Wickens recalled her childhood on Bon Portage Island in an interview with Chris Mills in 2002. Annes brother Laurie was just a year younger than she, and he was born in July, which meant he could be born on the island as Keeper Richardson could almost certainly get to the mainland to fetch the doctor and midwife when the time came. Anne related the events that occurred the day Laurie was born:

It was a very hard birth and in the middle of it, [our] cow Amaryllis decided to strangle herself! The cow wrapped the rope around her throat and lay down and started rolling around [outside]. The midwife screamed, the doctor dropped everything and went rushing out. He didnt know what to do for the cow, so the midwife came tearing out with a carving knife and cut the rope!

Betty June, the third child, was born four years later. The Richardson children enjoyed playing with the family cat, and the family ox:

Dads farming operation was very gradually built up from one cow and a few sheep. The sheep became a flock of about a hundred and the first thing Dad needed was an animal for transportation and carrying heavy loads. So he invested in an ox.

The first ox was named Broad, and he was a Jersey. Broad would lie down and chew his cud and we would play by climbing up one side and sliding down the other. Then we would climb over his horns and slide down his nose. He never offered to get up; he never minded anything we did. We used to whack him right in the eyes because the flies liked to get in his eyes and we didnt want them to do that! He was the largest playmate I ever had and he was one of the very few playmates we had at the time.

Morrill and Evelyn took the responsibility of lightkeeping very seriously. Raising three children and running a farm on an island during wartime demanded a lot of time, but Anne remembers the light always had the highest priority.

I came to realize they were very dedicated. There was a journal of some kind that told the light keepers the exact moment of sunrise and sunset. At sunset you lit the light right then and there and at sunrise, you put it out right then and there, which of course, meant getting up four oclock in the morning on summer mornings and staying up till around 10 in summer evenings.

The only lighthouse around us who paid much attention to this was Cape Sable. Cape Sable was always lit right at the minute and always out right at the minute. This was the sort of thing my father tried to do. I remember him coming in, tearing through the kitchen, leaving the doors open behind him to dash up the stairs saying The Capes lit! It was a dreadful dereliction of duty and a disgrace to the whole Richardson clan not to do your duty at the very moment it was supposed to be done!

Some of the other light keepers didnt seem to bother too much with this notion. Great Grandpa Larkin [on nearby Stoddart Island] was one of them and on one occasion, Dad mentioned to the old gentleman -- he was in his 80s then -- that you know, the light wasnt being lit right when the sun went down. But Great Grandfather had been a sea captain in the days of sail and he did everything by the tide. He didnt see any reason at all why his little inshore light should be lit before the tide brought the local fishing boats in from the fishing grounds.

In 1964, significant changes came to Bon Portage: the Richardsons left their island home, bequeathing their property to Acadia University, and a new lighthouse and detached keepers dwelling replaced the old lighthouse/dwelling combination. An additional dwelling had been built on the island in 1955, after a fog signal was added to the station requiring the presence of an assistant keeper.

Following the automation of the lighthouse in 1984, the university set up a research facility in the vacated structures, and in 1990, the station was officially named the Evelyn and Morrill Richardson Biological Research Station. The Richardsons two daughters, Anne Wickens and Betty-June, were in attendance at the dedication. In 2012, Acadia University and the Nature Trust signed a conservation easement that will protect Bon Portage Island forever. The island is a critical stopover for many migrating birds, and is home to over fifty species of breeding birds.

For a larger map of Outer Island (Bon Portage Island) Lighthouse, click the lighthouse in the above map.

A fourth-order Fresnel lens from Bon Portage Lighthouse is on display at Seal Island Lighthouse in Barrington.

The lighthouse is owned by the Canadian Coast Guard, but the island is owned and managed by Acadia University, which operates the Evelyn and Morrill Richardson Field Station in Biology on the island. Grounds open, tower closed.