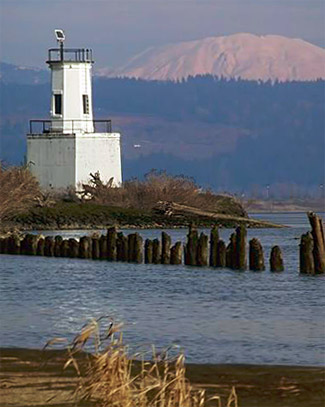 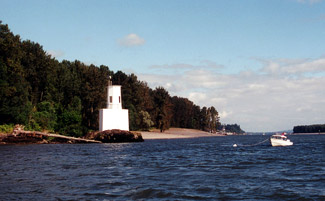 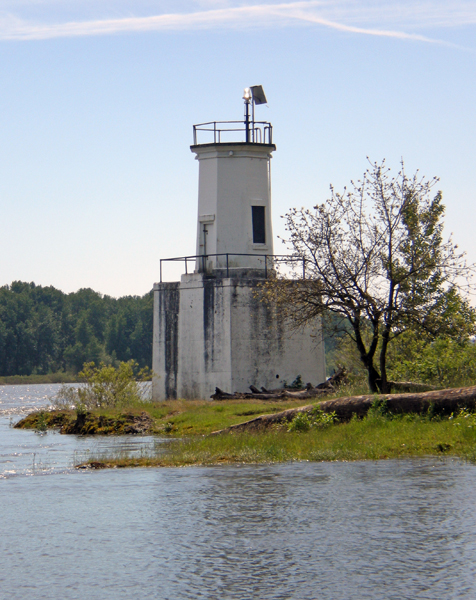 On October 28, 1792, an advance party from Captain George Vancouvers Columbia River expedition set foot on a rocky point near the northern end of Sauvie Island. Shortly thereafter, Lieutenant William Broughton and his men were surrounded by twenty-three canoes carrying war-clad Chinooks. Broughton prudently decided to make peace rather than fight and called the place where this encounter occurred Warrior Rock.

Roughly one hundred years later, the United States government decided to build a light and fog signal at Warrior Rock to help guide river traffic to and from the Portland area. The owner of the selected site demanded an exorbitant sum, and the government was forced to initiate condemnation proceedings in 1887. After title to the land was obtained in December 1888, plans were drawn up for the combination light and bell tower and a contract for its construction was awarded.

Sixteen-mile-long Sauvie Island is the largest island in the Columbia River, and is bordered by the Columbia River to the east, Multnomah Channel to the west, and the Willamette River on the south. While the island is larger than Manhattan Island, its population is just over one thousand, and most of the islands 26,000 acres are devoted to agriculture. Situated near the junction of the Lewis River, Columbia River, and Multnomah Channel, Warrior Rock was seen as an ideal spot to mark this important intersection.

Built in 1889, Warrior Rock Lighthouse was originally a small, two-story structure set atop a sixteen-foot-tall sandstone foundation. The single-room first floor contained the clockwork that operated the bell, a bed for the keeper, a table, and stove, while the second floor was primarily a covered half deck housing the lens lantern and fog bell.

The bell has the distinction of being the oldest fog bell in the Pacific Northwest. Cast in Philadelphia by J. Bernhard & Co. in 1855, the bell was first used at Cape Disappointment at the mouth of the Columbia River. The winds, land contour, and roaring seas at the cape made it difficult to hear the bell, so the bell was discontinued in 1881 and transferred to Puget Sounds West Point Lighthouse, which was under construction at the time. A Daboll trumpet replaced the fog bell at West Point in 1887, and two years later, the bell was shipped to Warrior Rock. The striking apparatus for the bell was brought in from Washingtons Ediz Hook Lighthouse, which had recently received a stronger one.

During its first season of operation at Warrior Rock, the bell was tolled a single blow every fifteen seconds for 316 hours. Joseph Haybrun, the stations first keeper, recorded in the stations logbook that he had trouble with the bell and that the lamp kept blowing out. Lightkeeper Frank DeRoy, who served at Warrior Rock for a decade, nicknamed the bell Black Moria because the striking mechanism would often break and he would have to ring the bell manually for hours.

Keeper Hayburn was born in Kentucky, and at the age of eighteen marched off to fight in the Civil War. According to an article announcing his death in 1912, Hayburn fought in the Battle of Stones River, where only three men in his company survived and ninety-three of their one hundred horses were killed. The Battle of Stones River had the highest percentage of killed and wounded of any major Civil War battle. A total of 24,645 men, or roughly thirty-two percent of those who participated, were killed in the bloody, three-day battle.

As no formal dwelling was provided at the station, the first keepers were given twenty dollars per month to offset their need to find their own housing. In 1912, the Lighthouse Service requested $2,000 to purchase 1.61 acres near the lighthouse on which stood a fairly good dwelling, which was being occupied by the keeper. The desired amount was appropriated on October 22, 1913, and the dwelling and other buildings on the adjoining land were acquired by the government.

Frank and Jenny DeRoy transferred to Warrior Rock from Heceta Head Lighthouse in 1925 so their son Robert could receive needed orthodontic work in Portland. Robert could board the steamer America at St. Helens in the morning, receive the necessary care in Portland, and be back in St. Helens that afternoon along with milk he had picked up from one of the dairy ranches along the river.

When the river was high, the towers sandstone foundation and surrounding land would often be underwater. At those times, DeRoy rode an aerial tram he concocted by stringing a cable from a tree near the dwelling to the lighthouse. After the light was electrified in 1928, Keeper DeRoy could simply flip a switch to activate the light and fog bell.

A cold wave of unprecedented severity embraced western Oregon and Washington from January 14 to February 4, 1930. The Columbia and Willamette Rivers below Portland froze over for the first time in sixty years. Several island communities in the lower Columbia were cut off by the ice, leaving numerous people and their livestock without provisions. The lighthouse tender Rose was loaded up with supplies for the settlements and succeeded in making seven landings and delivering ninety tons of supplies and feed. Though many were terribly inconvenienced by the cold spell, Keeper DeRoy used it to his advantage as shown in the following account from the Oregonian.

Though he has been in the Lighthouse Service for more than 25 years, has sailed on the lighthouse tenders and taken supplies through the surf and slid in the breeches buoy from the swaying masts of the tender to the lighthouse station, and has had countless other experiences, Frank DeRoy, keeper of Warrior Rock Light on Savies Island, Columbia River, Oreg., had a new experience added to his long list this week  he walked on a smooth ice surface and over deep water from his station to St. Helens.

Mr. DeRoy made his journey over ice to the St. Helens shore several times before a tank steamer broke the ice in Willamette slough. But now, with the ice broken and his rowboat frozen in, he is marooned, but almost within hailing distance of people who live on the west side of the slough.

In 1931, the little frame lighthouse was replaced with a twenty-eight-foot concrete tower, built on the same square sandstone foundation. There it remained until May 27, 1969, when a barge ran into the lighthouse causing considerable damage to the foundation and disabling the light and fog bell.

While the Coast Guard debated whether to rebuild the tower, the historic bell was removed. During the move, the bell fell into the river and was severely cracked. The damaged bell was never returned to the lighthouse, and it can now be seen on the north side of the Columbia County Historic Courthouse in St. Helens, Oregon. Along the waterfront in St. Helens, you can also see a half-scale replica of the original Warrior Rock Lighthouse.

Today, a flashing white light is displayed from the tower at Warrior Rock, but there is no fog signal. Warrior Rock Lighthouse is the only one of the three lighthouses established on the Columbia River that has survived. Willamette River Lighthouse burned in the 1950s, and Desdemona Sands Lighthouse was dismantled in the 1930s.

The Chinooks are gone from Sauvie Island, and today the island is a pastoral paradise with pumpkin patches, marble-sized blueberries, and miles and miles of scenic roads perfect for biking. At the northern tip of the island, the rebuilt Warrior Rock Lighthouse continues to guide river traffic along the mighty Columbia.

For a larger map of Warrior Rock Lighthouse, click the lighthouse in the above map.

The lighthouse can be reached quickly via a 0.2-mile boat ride from the riverfront marina in Saint Helens. Otherwise, you can drive to the northern part of Sauvie Island and hike three miles to Warrior Rock Lighthouse. A distant view of the lighthouse is also possible from Dike Road on the Washington side of the river.


This lighthouse by itself is not overly impressive. However, if you make sure and see the half-scale replica of the original Warrior Rock Lighthouse, located behind the historic, stone St. Helens County Courthouse, as well as the fog bell which was used in the original tower, located just south of the steps on the west side of the modern court house, the combined experience is worthy of a stop.