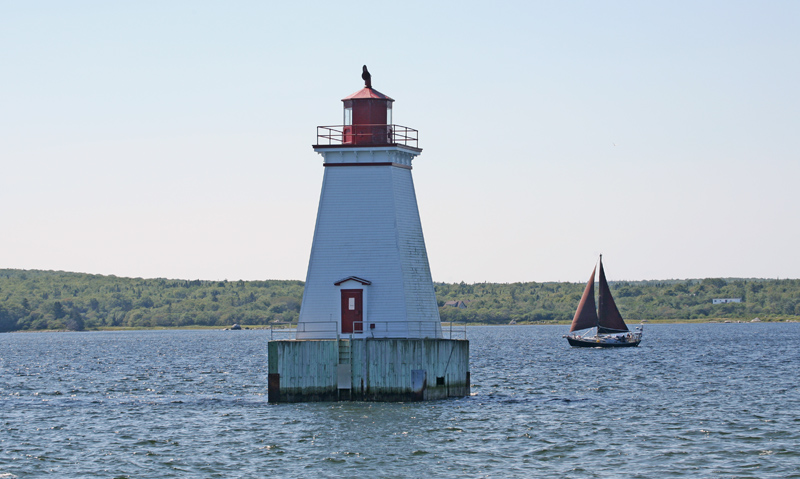 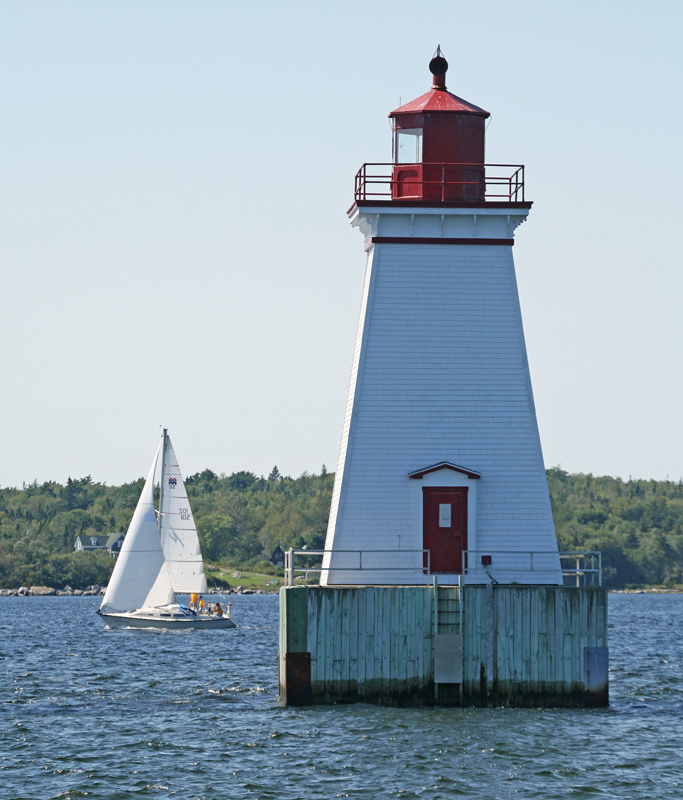 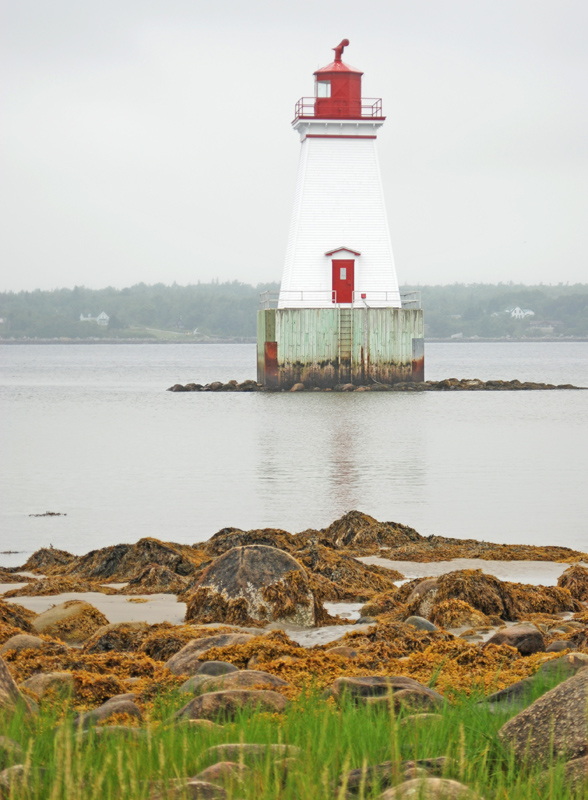 Cape Roseway Lighthouse was placed in operation on McNutts Island in 1788 to mark the approach to Shelburne Harbour, but once mariners passed this light, they still had to sail roughly seventeen kilometres to reach the wharves at Shelburne. The entrance to the harbour itself is between Sandy Point and Fort Point, and is just over a kilometre wide. A sand spit extends westward from Sandy Point for over 200 metres, justifying the need for a light to mark the narrow harbour entrance.

On September 25, 1873, H. W. Johnston, the Department of Marine and Fisheries agent for Nova Scotia, submitted a report to the minister of the department containing the following information on the recently completed lighthouse at Sandy Point.

Shelburne Harbor Light, which is a fixed red one, elevated sixty-seven feet above the level of high water, is situated on Sand Point, east side of the entrance to Shelburne Harbour. The tower, a square wooden building, is painted white, and was erected by Mr. George De Champ for the sum of $725. The light was first shown on the 1st September, 1873, and is intended as a guide to Shelburne Harbor, and to mark the dangers of Sand Point. Mr. Edward Goudock was appointed keeper, at an annual salary of $200.

On the night of February 20, 1878, Keeper Goudock, who lived in his own home nearby, left the light around 10 p.m. after ensuring that everything was in proper order. Roughly two hours later, the tower was engulfed in flames and burned down. An investigation was held, but the cause of the fire was not determined definitively.

The Department of Marine and Fisheries agent for Nova Scotia recommended that no time be lost in rebuilding the light, which he proposed should be located on Surf Point, on the opposite side of the harbour. As previously situated, the light was too far inland to properly mark the sand spit that projected from Sand Point. A contract for the new lighthouse was awarded to Messrs. N. R. & Z. Freeman of Liverpool, but before work had begun, the decision was made to place the light at the end of the spit projecting from Sandy Point.

Bids were requested for constructing the tower atop a pier placed on the sand spit, and George De Champ, who had built the original lighthouse, was awarded a $1,725 contract for the pier and tower.

The following description of the lighthouse appears in the Annual Report of the Department of Marine of 1880:

The light tower is 42 feet high and painted white, and is built on a pier situated four feet above the low-water line and 240 feet from the extremity of the sand spit. The pier is of hemlock timber, 30 foot square on top, and sloping to 33 ¾ feet square at bottom. It is sunk two feet in the sand, and the top is about 10 feet above the average high tide. The sides are sheathed with oak plank, and an iron plate is put on the north-east angles as a protection against ice. Rip-rap stone work is built up five feet high on the pier, and extends at bottom nine foot on every side.

The lighting apparatus consists of four large flat-wick lamps, three with 20-inch reflectors, and the fourth without any reflector; they are arranged on an iron shelf in the lantern.

The light, which is for the purpose of leading vessels into Shelburne Harbor, is fixed red. It is elevated 47 feet above the level of high water, and in clear weather should be seen from a distance of about 10 miles.

In 1888, it was noted that the pier had settled about eighteen inches on the southwest side due to the sea undermining the foundation. The tower was wedge up to make it level and stone was deposited around the pier to reduce further scouring. In 1903, the tower was relocated to a square concrete pier built just east of the old wooden pier. The new pier was seventeen feet high and was built by day labour under the direction of Amos McLellan for $1,562.

A fourth-order Fresnel lens was installed in the lantern room in 1914.

Robert Bush was the last keeper of the lighthouse, serving from 1953 until the light was automated in 1980. The Coast Guard discontinued the light in 1996. In 1999, Sandy Point Community Recreation Group opened a community hall in a park developed on the point near the lighthouse. Atlantic Canada Opportunities Agency (ACOA) contributed $3,298 towards various upgrades at the park. These included a retaining wall on the shore with stairs to the beach, picnic tables, a barbecue windbreak, a storage shed for the tables, and landscaping. Ownership of the lighthouse was transferred to Sandy Point Community Recreation Group in 2004.

In 2008, ACOA invested $38,274, Nova Scotia Economic Development contributed $20,000, the Municipality of the District of Shelburne donated $10,000, and the Nova Scotia Lighthouse Preservation Society pitched in $6,600 to restore Sandy Point Lighthouse and make it more tourist friendly. That summer, the lighthouse base was strengthened, the tower received new siding, a stairway to the top of the base was added, and interpretive panels were put in place on shore. After the restoration work was complete, Sandy Point Lighthouse was reactivated as a privately maintained aid to navigation.

ACOA is investing in the Sandy Point Lighthouse to make structural improvements that are key to its historic and cultural preservation, said Parliamentary Secretary Gerald Keddy. Through this investment in tourism infrastructure, our Government is demonstrating its commitment to support economic development in the community and surrounding area.

In 2015, the Sandy Point Community Recreation Group entered the lighthouse in This Lighthouse Matters, a crowdfunding competition sponsored by National Trust for Canada and the Nova Scotia Lighthouse Preservation Society. Twenty-six lighthouses in Nova Scotia competed for online votes in three different categories: High Tide, Ebb Tide, and Low Tide. The top three vote-getters in each category were given monetary awards that totaled $250,000. Sandy Point Lighthouse won $10,000 by coming in third place in the Ebb Tide category.

For a larger map of Sandy Point Lighthouse, click the lighthouse in the above map.

From Highway 103, proceed south into Shelburne, and then follow the Lighthouse Route (the actual road will have various names) south for 10.4 km (6.5 miles), along the eastern shore of Shelburne Harbour. There is parking available in a park near the lighthouse. It is possible to walk out to the light on a sandbar at low tide.

The lighthouse is owned by the community of Sandy Point. Grounds open, tower closed.