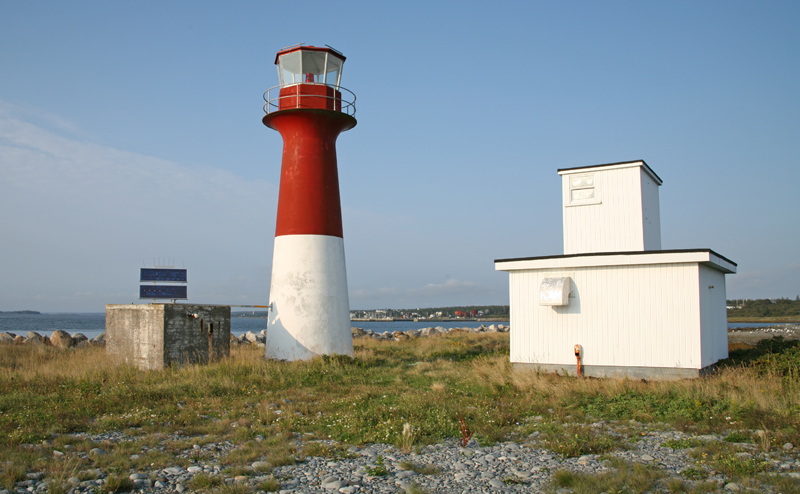 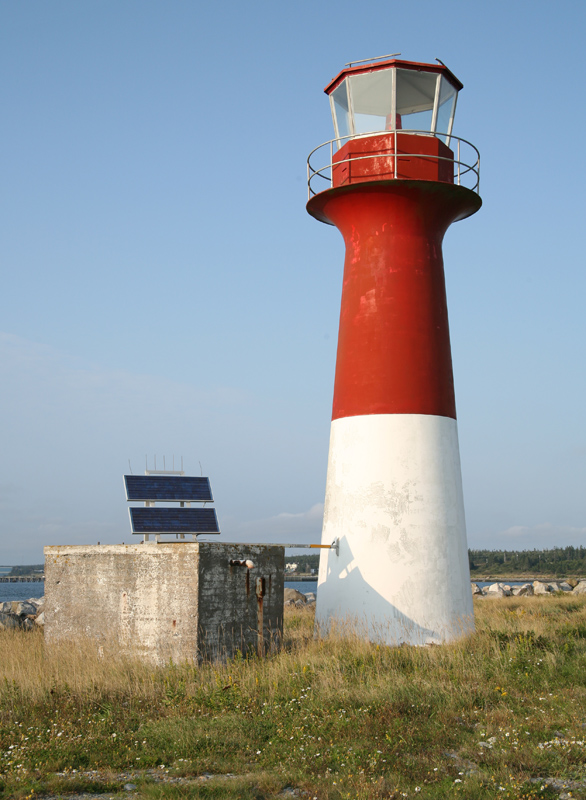 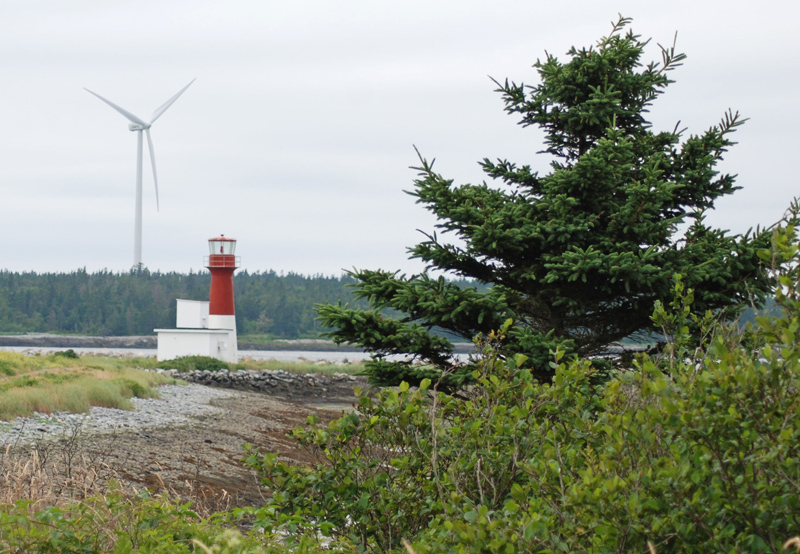 Pubnico Harbour is a deep, lengthy inlet found on the south shore of Nova Soctia between Cape Sable and Yarmouth with the town of Pubnico situated at its head. The villages of East Pubnico, Middle East Pubnico, and Lower East Pubnico are found along the east side of the inlet and similarly named villages are located on the west shore. A lighthouse for Pubnico Harbour was considered as early as 1848, but that year the Commissioners of Lighthouses for Nova Scotia decided that while it would help local trade, it would not benefit general navigation of the Bay of Fundy. In early 1852, a petition from Simon dEntremont and others asking for a lighthouse at Pubnico Beach was read in the House of Assembly, and the light was included on the list of five lighthouses to be constructed that year using money provided by the government not to exceed 1,500 pounds. Advertisements were published calling for bids for the construction of the lighthouse at Pubnico Harbour, but the tender received was so high that the project was deferred until the next year.

Pubnico Harbour Lighthouse was finished in 1853, and Maturin Amiro was appointed its first keeper at an annual salary of thirty-five pounds plus a fifteen-pound fuel allowance. The lighthouse resembled Fort Point Lighthouse, which is still standing at Liverpool, and like it, the tower had a box-like lantern room with glass windows on three sides. William Condon, Superintendent of the Board of Works for Nova Scotia, left the following report of a visit to the lighthouse in 1857.

A fixed red light on the seaward side, and shows a white light up the harbour from two catoptric lamps, with reflectors, and one Argand lamp, without reflector.

The building is a small one, painted white, and similar in size and design to that at Fort point, Liverpool. Arrived at this place the afternoon of the 7th August, landed stores, and inspected the establishment. I found everything in excellent order and remarkably clean and neat. This building, like that at Fort point, is entirely too small, and is not more than large enough for a beacon, not to speak of a family of eight to live in it. The keeper has put up a small building at his own expense, which he uses as a kitchen. There is no cellar to the light house, nor can any be made, and the oil has to be kept in the dwelling.

The keeper asks for aid to erect a small addition to the lighthouse, the building he put up, is detached from it. As he is a carpenter, he will do the work himself. I would advise that the sum of 15£ be allowed him for this purpose, especially as he has now neither store, nor shed, even to keep his wood in.

This lighthouse stands on a low spit or beach, which extends a considerable distance into the harbour, and at high tide the water is within a few feet of the door. They can keep no cow here, and all the water they use has to be brought in a boat nearly a mile. This case is I think a peculiar one, and the keeper, who bears an excellent character for attention to his duties, is, I think, worthy of the favor he asks. His salary was raised to 50£ this year, which was quite necessary, as he had too little before.

An addition to the dwelling was finished in 1858, and a new freshwater tank and a fifteen-by-twelve-foot oil store were built in 1872. Keeper Amiro used his carpentry skills until he had eventually expanded the living space to twenty-two rooms. Still, life on the point was difficult, as storms brought waves crashing against the dwelling and prevented the family from growing a garden or keeping animals on the narrow spit of land they called home.

In 1874, the lighting apparatus in the tower consisted of three lamps. Two lamps, equipped with twelve-inch reflectors, were used to shine a light up the harbour and out to sea. The third lamp, without a reflector, illuminated the channel in front of the tower. 133 gallons of oil were delivered to the station on May 6th, 1874, and it was noted that 92 gallons had been consumed the previous year.

In 1889, a ten-foot-tall addition was made to the tower, and an iron lantern room, formerly used at Peggys Point, was installed atop the lighthouse. A sixth-order Fresnel lens was used in the lantern room to produce a fixed white light  the seaward-facing characteristic of Pubnico Lighthouse had been changed from fixed red to fixed white in 1861.

A breakwater that surrounded the lighthouse was so damaged during the winter of 1890  1891 that 150 feet of it had to be rebuilt under the supervision of Keeper Amiro at a cost of $183.

Maturin Amiro served as keeper until 1893, when his son George took charge of the light. George would serve until 1916 before passing the responsibility of the light to the third generation of Amiro keepers: Austin J. Amiro.

George Amiro was given a hand-operated foghorn in 1898 that he was required to sound in response to the signal of vessels in the area during limited visibility. A new lantern room and a fourth-order Fresnel lens were installed atop the lighthouse in 1908, changing the characteristic of the light to an occulting white light visible for six seconds and then eclipsed for four seconds. Fire destroyed the lantern room on January 19, 1926, and a fixed white light was exhibited until repairs could be made.

The original, though greatly modified, lighthouse was removed in 1967 and replaced by a small, square fog alarm building atop which a light was exhibited from a skeletal tower. In 1984, a separate, freestanding fibreglass tower was erected near the end of the spit. A dwelling for the keeper of the light was also built some distance up the nearby hill, where it would be safe from flooding. Merle Thomas, the last keeper of the light was living in the dwelling when the light was de-staffed on September 7, 1987.

The fibreglass tower, with its upper portion painted red and lower portion white, stands 11.5 meters tall. The light and old fog alarm building are protected by a breakwater of large boulders placed along the seaward side of the gravel bar. The area provides a good view of offshore islands as well as the wind farm located across the harbour. The light and fog alarm were deactivated in 2000, but the light was re-established in 2005.

For a larger map of Pubnico Harbour Lighthouse, click the lighthouse in the above map.

Just north of Charlesville, at the Yarmouth and Shelburn County line sign on Route 3, turn east onto a gravel road (Lighthouse Road) and proceed 0.3 km (0.2 miles) until the road ends near Pubnico Harbour Lighthouse. No parking is provided, but the turn around is large enough to allow one to leave their vehicle and walk to the light at the end of the spit.