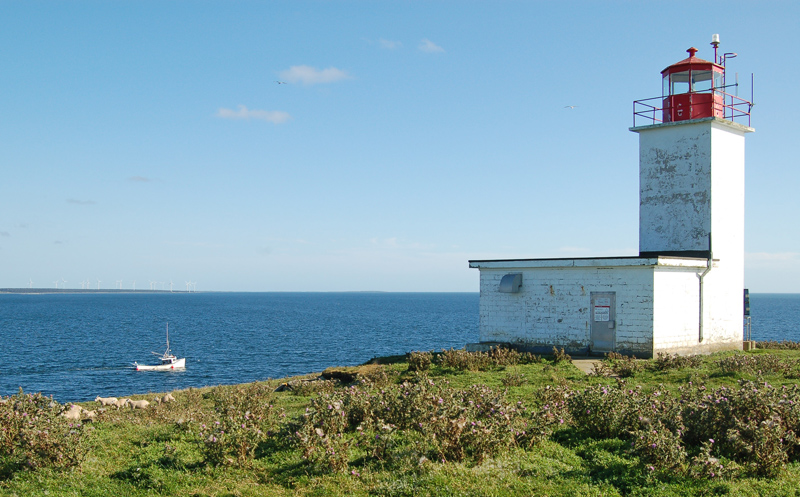 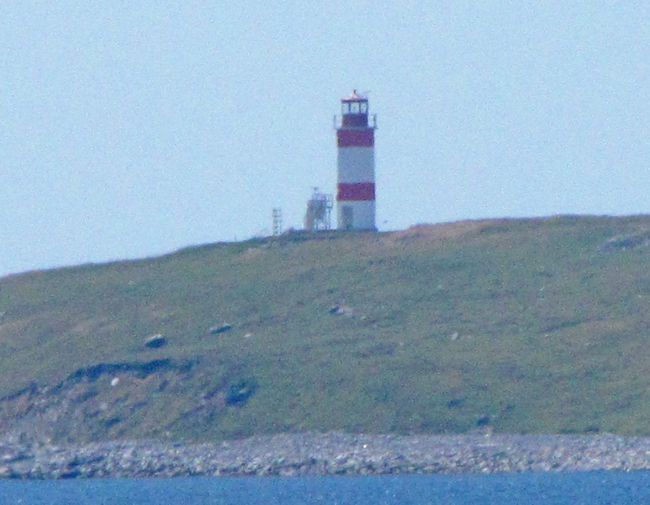 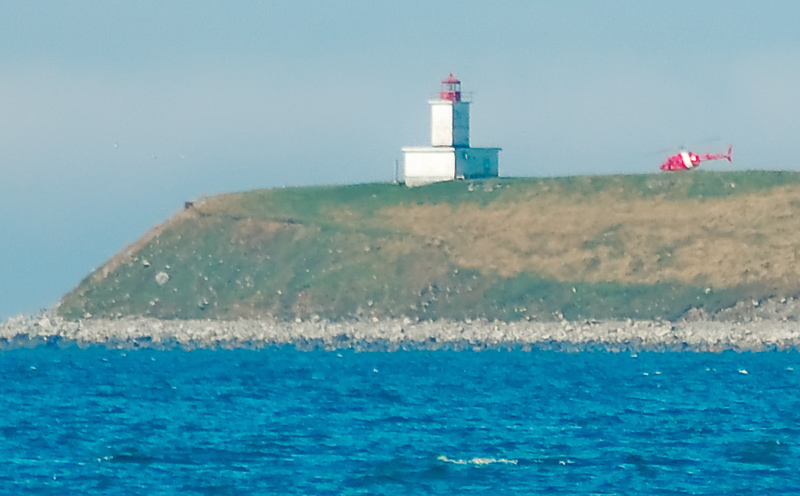 Whitehead Island is the south-easternmost of the numerous islands in the bay between Abbotts Harbour on the east and Frenchman Point on the west. The island is about 500 metres long, and has conspicuous earthy cliffs of a reddish hue that are over twenty metres tall on its southern end. The Annual Report of the Department of Marine and Fisheries for 1874 contains the following information on the establishment of a lighthouse on Whitehead Island.

Argyle Lighthouse has been erected during the present year on the south point of Whitehead Island, at the entrance to Argyle Harbour, in the County of Yarmouth.

It is surmounted by an iron lantern 7 ½ feet in diameter, having ten sides.

Two circular burners with reflectors, and two flat-wick lamps are on hand. 353 gallons of oil were delivered at this station, and four iron tanks will be supplied. An oil store 12 x 16 is provided, and a boat 15 feet keel is purchased, and will be sent to the station in a few days. A well has been dug and walled up, but the supply of water which it affords is very small, and I think it will be necessary to build a tank in the cellar to catch rain water.

This light is for the purpose of guiding vessels into Argyle Harbour, and was put into operation on 25th September last.

Mr. Isaac A. Montague was appointed keeper at an annual salary of $350.

On October 13, 1875, just over a year after starting his job as keeper, Isaac Montague drowned while trying to reach the island from the mainland. Herman H. Hamilton was given temporary charge of the light, but the position soon became permanent, and he spent the next twenty-two years on the island.

The new lighthouse on Whitehead Island, which was known as Argyle Lighthouse, was found to leak badly, so in 1875, its clapboards were removed and shingles were installed in their place. At exposed station, shingles were found to provide superior protection against the weather than clap-boards. A brick water cistern, lined with cement, was also built to supplement the islands well. A boathouse was constructed on the island in 1877.

In 1891, the government side of the island was fenced off by a wire fence. This may seem a bit unusual given the small size of the island, but there must have been sheep or other animals kept on the island.

Fifteen-year-old Ronald Spinney was alone in the lighthouse one October evening in the early 1950s. His father William was head keeper at the lighthouse, but he had taken leave to go hunting and was due back the next day. A sudden thunderstorm sprang up, pelting the lighthouse with heavy rain and lighting up the sky with an occasional lightning bolt. I was doing my dishes, Ron recalled years later. I hadnt done them for three of four days, a week maybe, so I had to get things cleaned up before my father got back! It was just after supper and there come this bolt of lightning right between the house and the shed. It wasnt very far away!

Just seconds later, a second bolt actually struck the tower. Ron raced up the stairs to see what damage had been done. In the top room below the light itself, the plaster was all knocked offa the wall. I couldnt smell any smoke or anything, so I said, I guess its alright, and I went back downstairs and finished my dishes.

With dishes out of the way, Ron decided to take a closer look at the damage. As he climbed the tower, he could hear fire inside the walls, snapping and cracking, like a fire in a stove. He dashed outside, and found that flames were starting to burn the bottom of the lantern room deck. With no fire extinguisher on the island, Ron had only a bucket to fight the fire. He quickly realized his battle was useless, so he started gathering what belongings he could and carried them out to the shed.

By the time the fire was burning good, the stars were out, Ron remembered. I just set back in the moonlight and watched er burn! The wooden lighthouse was over seventy-five years old and was hardly fit to live in, so Ron didnt consider it a great loss. Around midnight, two or three boats from Abbots Harbour arrived at the island after someone had noticed flames on the island. Keeper William Spinney was in one of those boats. I can still see him running over the side of the island, Ron said as his voice faded. I never thought of it at the time. I was fine, but they didnt know if I was dead or alive.

Records show that a new twenty-foot lighthouse and a detached keepers dwelling were built on the island in 1953. These must have been constructed to replace what the lightning strike had destroyed.

Life was lost on the island a decade after the lightning strike. Keeper Douglas Gallagher died of injuries received from an explosion at the station in February 1964. He was fifty-four at the time of the accident.

When the stations final keepers, Reg Smith and Walter Goodwin, were removed from the island in June 1986, they left behind the square tower with attached one-story building, a square two-story dwelling, a keepers bungalow, and a storage shed. Arnold DEon purchased the bungalow, put it on a barge, and towed it up to Pubnico Harbour. All the other remaining structures on the island, besides the lighthouse, were torn down.

In early 2017, the Canadian Coast Guard removed the damaged one-story building at the base of the light tower and gave the tower two red horizontal bands.

For a larger map of Whitehead Island Lighthouse, click the lighthouse in the above map.

From Route 3 in Pubnico, head south on Route 335 for 5 km (3.1 miles) and then turn right on a paved road marked with an Abbott's Harbour sign (Abbotts Harbour Road). Continue for 1.6 km (1 mile) to the harbour, where the light is visible 3.2 km (2 miles) offshore.