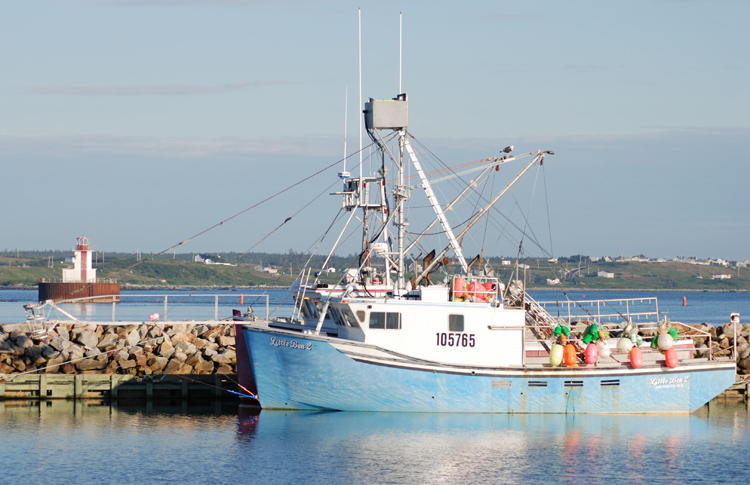 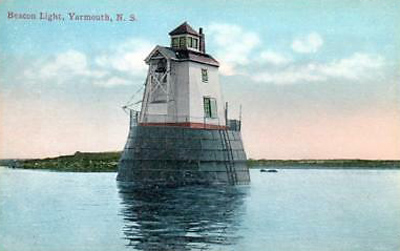 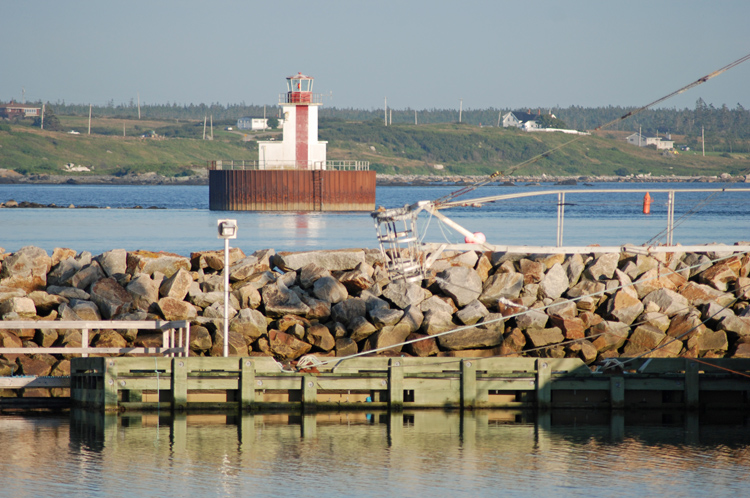 Francis Ryerson was awarded a contract amounting to $2,875 for constructing a pier and lighthouse off the southwest end of Bunker Island, at the entrance to Yarmouth Harbour. The total cost for the resulting Bunker Island Lighthouse, which was activated on February 16, 1874, ended up at $3,432.18. The cost increase was due to the difficulty in building the cribwork to support the light tower. Joshua Doane served as the first light keeper, earning an annual salary of $350.

The Department of Marine provided the following description of the new lighthouse, which was also known as Yarmouth Beacon or Yarmouth Harbour Lighthouse:

This beacon is erected on the end of the reef of the south-west point of Bunkers Island in Yarmouth Harbour, on the east side of the entrance. The foundation is of crib work about 24 feet high, and on this is erected a small dwelling-house and tower.

The light is elevated 27 feet above high water, and the illuminating apparatus consists of three mammoth flat-wick lamps with 20-inch reflectors, two facing south and one north. The lantern is of wood, with an iron floor, and protected with zinc, and the glass 21 x 27, the eastern side being dark. The windows of the lantern were originally on hinges, and were found to work loose and let in the weather; they have been made fixtures, and a platform and railing put outside to enable the keeper to clean the glass. The chimney has also been removed from the channel side, where it obstructed the light and placed on the dark side of the lantern. The buildings have had a coat of paint and are quite new. A boat 15 feet long is supplied, and is slung on davits attached to the top of the beacon.

The keeper lives in his own house on shore, but remains all night, and during rough weather, in the beacon, which is provided with two rooms, in the lower of which the oil is kept.

An upstairs room in the tower was provided for the keeper, who was required to stay at the light at night and in rough weather. This situation was not ideal for the keeper as he was forced to also maintain a home on shore for his family. A formal dwelling on the cribwork was finally constructed in 1885, and this structure was transferred to a new concrete and steel pier built in 1892 immediately south of the old cribwork pier. The cost of this change came to $5,462. The new pier was a steel cylinder with a diameter of thirty-six feet, was filled with concrete, and stood four feet taller than the previous one.

On January 15, 1907, a second lighthouse was established on Bunker Island to aid vessels around the northwest extremity of the island. This wooden pyramidal tower, twenty-two feet tall from its base to the top of the ventilator atop its square wooden lantern, was known as the Bunker Island North End Light and is no longer standing.

Due to dredging at the mouth of Yarmouth Harbour, Bunker Island Lighthouse had to be demolished and another built further inshore. The lightship Stoneman marked the station until the new lighthouse built on the ref off the southwest point of Bunker Island was put in operation in April 1924.

Keeper Jules Cottreau and his wife Ida raised six children at Bunker Island Lighthouse between 1931 and the early 1960s. The top of the pier where the lighthouse stood had a diameter of just 11 meters, which didnt provide a lot of play space for the children. To go to school, the children would typically cross to the island and then walk over two miles to school. In a story published in the Atlantic Advocate in May 1965, young Jean Cottreau said it was nothing for us to wear a raincoat to bed. The roof leaked so badly that an umbrella or a raincoat was the only way to stay dry.

Climbing the ladder to and from the top of the lighthouse foundation proved dangerous for the Cottreau family. Fourteen-year-old Alber injured his arm and head when he fell from the top of the ladder and had to wear eye glasses from them on. Ida Cottreau was laid up for eight months after being jabbed by a broken rung in the ladder. Teddy, the family dog, would supplement the stations bell when ships approached in foggy conditions. He was quite a dog, recalled Robert Cottreau. When he wanted to come down, hed get up there by the ladder and wag his tail. Wed get on the ladder, lean in and hed put his front paws on our shoulders and his hind paws above a belt and we could carry him down. When he got on his rocks he was on his own. He could climb the ladder better than we could.

Not long before Jules Cottreau retired, the present lighthouse, which does not have a living space, was erected. The towers beacon was originally exposed until a lantern room was added in 1984.

For a larger map of Bunker Island Lighthouse, click the lighthouse in the above map.

From the intersection of Lighthouse Route (Route 3) and Evangeline Trail (Route 1) in Yarmouth, head south on Main Street for 3.6 km (2.3 miles), passing the Visitor Information Centre, and then turn right on the gravel road marked Sand Beach (also known as Bunker Island Road). After 0.9 km (0.6 miles), turn left and proceed up the hill on a gravel road for 0.5 km (0.3 miles) to a gate, where you can park and walk to the light at low tide. The signage for the light is easy to follow. As you approach the light, you will get a good view of Bunker Island Lighthouse with Cape Forchu Lighthouse in the background. You can also view this light on the road to Cape Forchu.