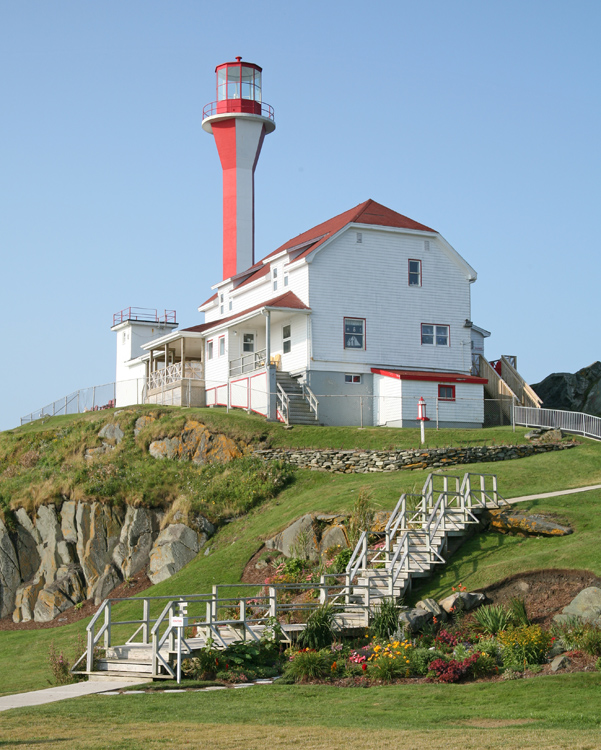 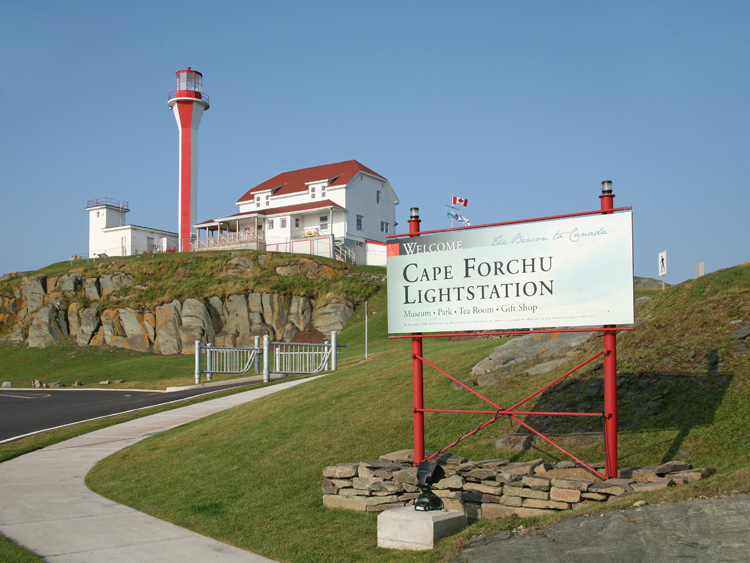 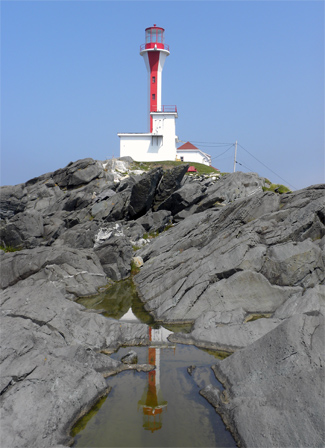 Samuel de Champlain landed on the southernmost tip of Nova Scotia in May of 1604 and named the site Cape Forchu (Forked Cape), due to the two prongs of land that jut into the sea like a serpents tongue. The first Cape Forchu Lighthouse, a wooden octagonal tower standing eighteen meters tall, was first lit on January 15, 1840. The site of the tower was originally an island surrounded by three bodies of water, Yarmouth Harbour, the Bay of Fundy, and the Atlantic Ocean, but a causeway to the island was later built.

John Killam and others engaged in navigation at Yarmouth first petitioned the Province of Nova Scotia for a lighthouse in 1836, but it wasnt until 1838 that the House of Assembly approved £750 for the purpose followed by another £250 the next year.

James Charles Fox, a veteran of the Royal Navy, taught school in Cornwallis until 1839 when he was appointed keeper of the newly erected lighthouse at the entrance to Yarmouth Harbour. After just over two months on the job, Keeper Fox passed away on March 27, 1840, and was replaced by his son, Cornelius John Thomas Fox, who would serve as keeper for thirty-three years, longer than any other keeper at Cape Forchu. On September 1, 1873, Cornelius Fox was placed on an annual pension of $294.60 and his son, James Fox, was appointed keeper at a salary of $800 (part of this money was to hire a keeper). James Fox resigned the following year, and John H. Doane was made keeper of the lighthouse and fog whistle on July 1, 1874.

A fog bell was placed in operation near the lighthouse in 1857, and in 1869, a fog whistle was established on the cape that sounded for ten seconds in every minute during foggy weather and snowstorms. From June 30, 1873 to June 30, 1874, the whistle was in operation for 1,336 hours, requiring the burning of seventy-eight tons of coal and seven cords of wood.

The original illuminating apparatus for the Cape Forchu Lighthouse was described in 1857 as five catoptric lamps, with reflectors, and five Argand lamps, without reflectors, that revolved to produce a flashing white light. In 1874, the apparatus was ten lamps and 12-inch reflectors, arranged in two rows, four being stationary, looking seaward, and six being placed on a revolving frame. The flash up the harbour is produced by the six lamps, and the flash seaward by the whole ten. When the revolving arm comes around, and the six lamps are just over the four fixed, a screen which is carried round by the revolving apparatus is removed, and the ten lamps give a power flash to seaward.

In 1908, a second-order Fresnel lens, equipped with eight flash panels (bulls-eyes) and purchased from a manufacturer in Paris for $38,000, was installed in the lantern room of the Cape Forchu Lighthouse. The lens floated in a vat of mercury, which made it possible for a weight-powered clockwork mechanism to revolve the 3,300-pound lens and produce a flashing light.

After 123 years of service, the old Cape Forchu Lighthouse was showing its age and needed to be replaced. Yarmouth tourist officials received assurance from the Coast Guard that the new tower would look similar to the original so the seaside vista, so familiar to residents and tourists, would remain practically unchanged. When the present apple core tower started to take shape on the cape in 1961 beside the historic tower, quite a few people were alarmed at the marked difference between the two. It took a while for the controversy to die down, but the new tower, which is painted in vertical red and white stripes like its predecessor, has managed to win over the hearts of most people. The Fresnel lens that had been used in the original tower until it was deactivated in 1962 is now on display at the Yarmouth County Museum.

Cape Forchu was the last remaining staffed lighthouse in Nova Scotia, when its final keepers left in 1993. The dwellings, however, didnt remain vacant for long as the property was leased to the Yarmouth County Tourist Association in 1995 and a group of concerned citizens formed Friends of the Yarmouth Light Society, which opened the 1912 keepers duplex to the public in 1996. Thanks to the persistence of Craig Harding and Gert Sweeney, President and Vice-President of the Friends of Yarmouth Light Society respectively, in 2000 Cape Forchu Lighthouse became the first lighthouse to be turned over to a municipality by the Canadian Coast Guard.

For many years, a museum and tea room were located in the 1912 keepers duplex near the tower, and a gift shop was housed in the nearby keepers bungalow, built in the 1970s, but a decline in visitors, due partly to the loss of the Maine to Yarmouth ferry service, forced the Friends of Yarmouth Light to make some changes. Starting in 2013, the gift shop was moved to the keeper's duplex, and the food offerings were cut back.

In 2019, the Municipality of the District of Yarmouth notified the Friends of Yarmouth Light that the municipality would not be renewing the groups lease and would instead take control of the property itself. The friends were invited to help run the museum at the site, but they decided instead to take the artifacts that had been entrusted to them over the years and open a new museum in Yarmouth. The municipality envisions the lighthouse becoming more globally known under their leadership.

In 2021, tours that allow the public to climb the seventy-seven stairs to the lantern room started to be offered. Cape Forchu Lighthouse is the only apple-core-shaped tower in Canada that is open for climbing.

For a larger map of Cape Forchu Lighthouse, click the lighthouse in the above map.

At the intersection of Lighthouse Route (Route 3) and Evangeline Trail (Route 1) in Yarmouth, go north on Route 1 for 0.5 km (0.3 miles) to Vancouver Street. Turn left onto Vancouver Street (Route 304), and watch for the lighthouse sign 0.7 km (0.4 miles) ahead directing you to turn left to remain on Route 304. Proceed south from this point 7.2 km (4.5 miles) to reach Cape Forchu Lighthouse. You can get a great view of Bunker Island Lighthouse on the left as your near Forchu. Facilities at Cape Forchu Lighthouse are open during the summer from 10 a.m. to 4 p.m.

The lighthouse is owned by the Municipality of Yarmouth. Grounds open, tower closed.