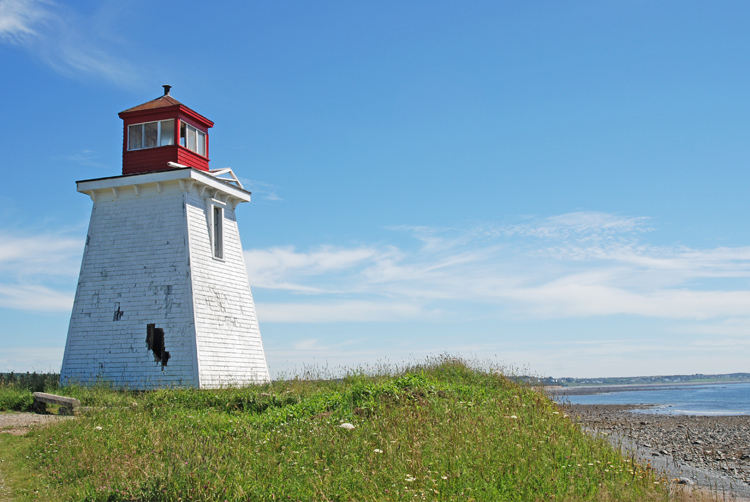 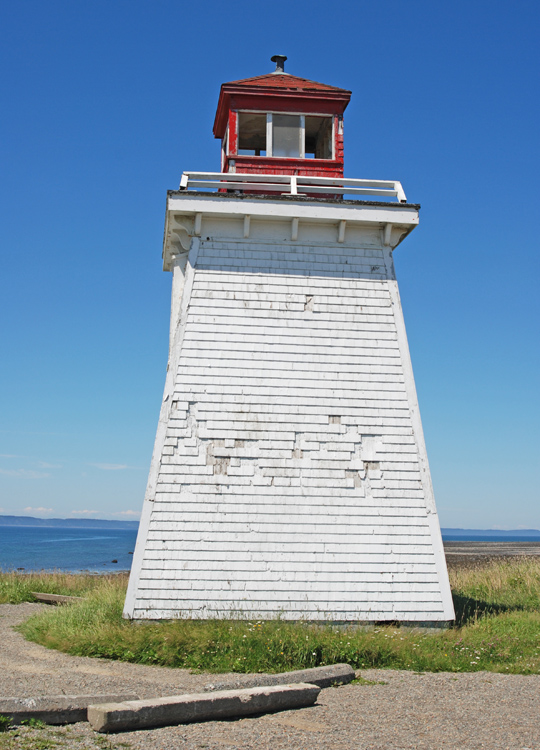 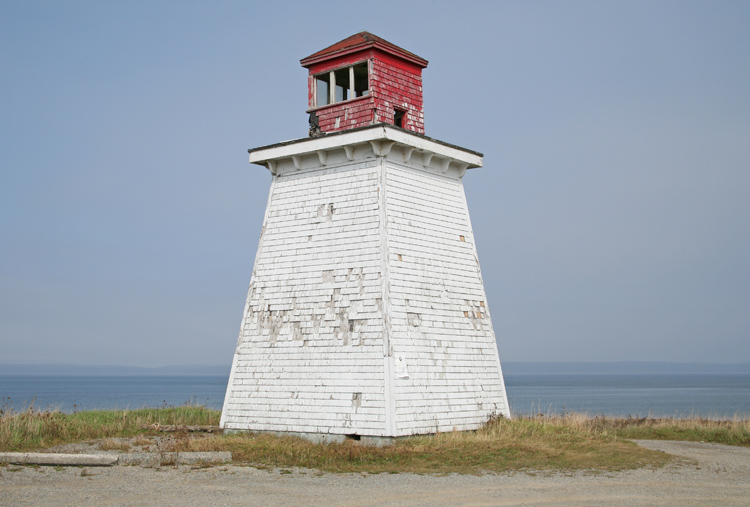 Built in 1874 by G. S. Parker for $650, Church Point Lighthouse was a white wooden pepper-shaker-type tower standing 9.4 meters tall and topped by a red lantern room. Jeremiah McLaughlin activated the light for the first time on September 25, 1874 and was paid an annual salary of $200. The lighthouse was established to mark Church Point and protect mariners from dangers in its vicinity. The Department of Marine gave the following description of the lighthouse in 1874:

The light-house is placed on Church Point, on the east side of St. Marys Bay, Digby County. The tower is a square wooden building 20 feet high, painted white, surmounted with an iron lantern 7 ½ feet in diameter, having ten sides glazed with plate glass 36 x 28. The side in-shore is dark, and the illuminating apparatus consists of one circular-burner lamp with 20-inch reflector and two mammoth flat-wick lamps with 16-inch reflectors. The light is exhibited from an elevation 36 feet above high water, and should be seen in clear weather about 10 miles. One flat-wick burner lamp is on hand. The light will be improved by the addition of two A lamps and 12-inch reflectors.

No dwelling was initially provided for the keeper, as McLaughlin lived in his own home some distance from the station. There were, however, two rooms in the tower one of which was used by the keeper while he was attending the light. In 1875, Keeper McLaughlin was given $500 to build a dwelling attached to the tower.

John H. Saulnier, who would serve forty years at the lighthouse, took over as keeper on August 16, 1878, after McLaughlin resigned. In June of that year, the lighthouse was inspected and supplied with 243 gallons of oil for the light. In 1884, the upper portion of the dwelling, which had been left unfinished, was partitioned into two bedrooms to provide additional accommodations for Keeper Sauliner and his family.

The light was discontinued in 1984, while the dwelling was removed from the site sometime around 1953 when the light was electrified and made unwatched. The adjacent Université Sainte-Anne, founded in 1891 by Eudist priests from France and the only French language university in Nova Scotia, maintained the lighthouse for several years. Some restoration work was carried out in 1986 after funds were raised, but the lighthouse later fell into disrepair. Holes in the tower present in 2003 were still there in 2009.

Nearby Saint Mary's Church, whose steeple rises fifty-six meters, is the tallest wooden church in North America and is worth a visit.

The neglected Church Point Lighthouse was destroyed by a powerful spring storm on March 26, 2014 that packed wind gusts of over 100 km/h. The tower was blown off its concrete foundation, and pieces of the structure were strewn about the area.

The university built a replica of the original lighthouse and dwelling and opened it to the public on June 26, 2017. This structure, which is not an active navigational aid, serves as a research centre for the Université Sainte-Anne Biology Department as well as an interpretive centre during the tourist season. Displays tell the story of the former lighthouse and an observation deck surrounding the lantern room provides visitors with panoramic views of St. Marys Bay. Students provide guided tours that include walks on the beach during which plants and animals are identified.

Professor Shawn Craik and his students at the university use the building for bird banding activities. Together, they study various bird species, maintain nesting boxes in nearby Le Petit Bois, and participate in a pan-American study that tracks the migratory patterns of the tiny northern saw-whet owl (Aegolius Acadicus).

For a larger map of Church Point Lighthouse, click the lighthouse in the above map.

From Route 1 in Church Point, turn west onto Lighthouse Road or Le Chemin du Phare, which is a paved street that passes through the Université Sainte-Anne campus. At Beaulieu, a university residence hall, the pavement ends after 0.4 km (0.3 miles). Proceed on the gravel road an additional 0.5 km (0.3 miles) to Church Point Lighthouse where parking is available. Note: The turn from Route 1 is well marked traveling from Yarmouth, but not from the Digby direction. The lighthouse opened in June 2017 as a research and visitor centre. Click here for hours.