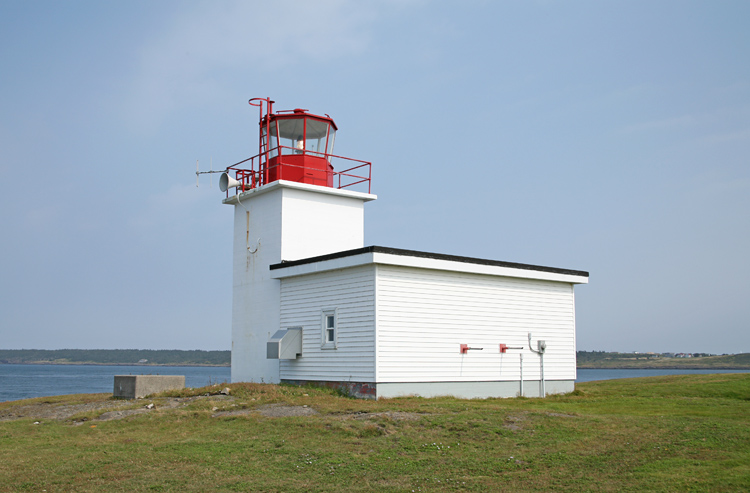 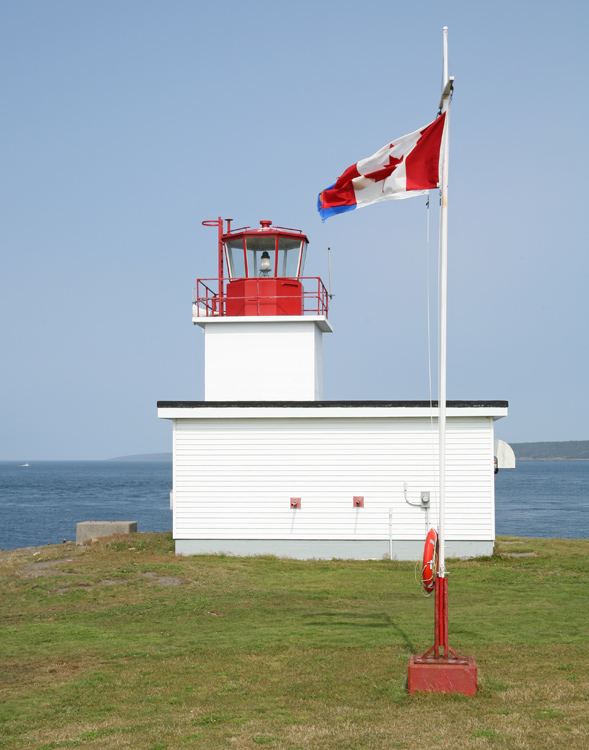 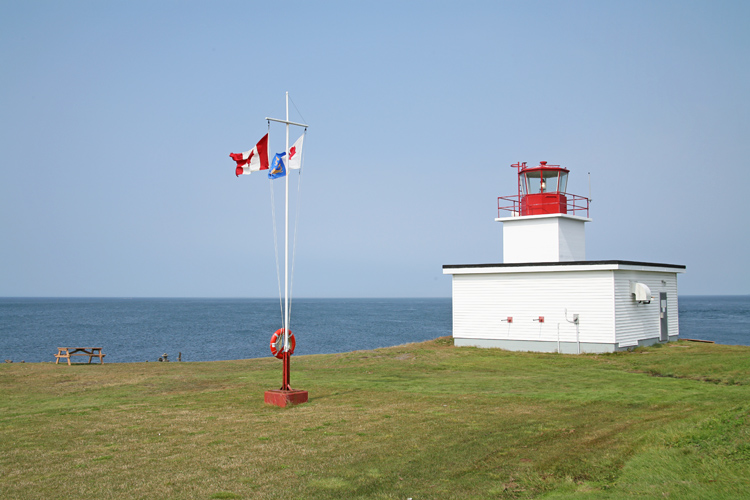 A lighthouse was put in operation on January 12, 1901, on the north Point of Brier Island, to indicate the north entrance to Grand passage. The light is a fixed red light elevated 62 feet above high-water mark, and should be visible for 8 miles from all points of approach by water. The illuminating apparatus is dioptric, of the seventh order. The lighthouse is a square, wooden building with sloping sides, painted white, surmounted by an octagonal iron lantern, painted red. It is 34 feet high from its base to the vane on the lantern. It was erected under contract by Mr. Frank H. Piper, of Westport, his price being $897.50.

A fog bell, supported by a framework near the northern side of the light tower, was established at the station in 1903. During thick or foggy weather, machinery gave the bell single strokes at five-second intervals.

In 1905, Mr. E. C. Bowers, of Westport built keepers dwellings for the two light stations on Brier Island, Grand Passage and Brier Island, for a contract price of $3,150. Charles Buckman was the first keeper of Grand Passage Lighthouse, serving from 1901 until his death in 1940.

While Buckman was keeper he picked up a bottle in November 1914 that contained a leaf from a memorandum book. One side of the paper was an Eastern Steamship Companys advertisement, and on the reverse was penned the following: August 8th, 1914 - German war ship off Coast of Maine.

In 1960, Wickerson Wick Lent gave up his job as a fisherman and moved with his wife Madeline and their four young children into a dwelling at Grand Passage. Having lost a leg in a boyhood hunting accident, Wickerson found that lightkeeping better suited him than trying to maintain his balance with an artificial leg on a pitching boat.

He returned from fishing one day when there had been a heavy sea and no fish, and the keeper of Grand Passage Lighthouse stopped by to see how Wick had made out that day. Nothing at all, Wick said. Why the hell dont you give me a chance to go up there and make some easy money?

You mean that?, replied the keeper. Sure do, said Wick. The keeper asked Wick to see if his wife would be willing to move to the lighthouse, and he quickly responded, Shell go anywhere to keep me off the water! And that is how Wickerson Lent ended up becoming a keeper.

The three school-aged Lent boys enjoyed their forty-five-minute, animal-studded walk to school each day. One day they returned home nursing a nearly-dead, red-tailed hawk, with a mouth full of porcupine quills. It must have flown over from the mainland following its encounter with the porcupine, as these animals were not found on Brier Island. The family did all they could to save the emaciated hawk, but it didn't make it through the first night. A taxidermist mounted the hawk for the boys, and they cherished it for years. The boys likely gained their fondness for birds and animals from their father, who assisted ornithologists in banding birds each fall and had a special license to collect rare specimens for the Museum of Science in Halifax.

It seemed that Sundays were mostly stormy, so the family typically stayed at home  easing their consciences by putting money in the mission boxes and listening to Sunday services on the radio.

In an interview with Chris Mills, Wickerson described how hard it was to heat the dwelling at Grand Passage.

You could stand with your butt against the kitchen stove and your ears and your belly would freeze? So I went investigating one day. I went up the back stairs, and I could look straight through the attic and see the bell buoy in the passage out in front of the house! And thats what I was trying to heat, was Grand Passage!

So I went to work. I went over in the lighthouse, and somebody had picked up a bale of oakum. So I said, Im gonna caulk that seam! It was the eaves trough had sagged with dirt, never been cleaned out. So the next day was quite fine, so I went to work stuffin in oakum and tore up boards that was there and nailed them on for to hold it down.

Not too many months after moving to Grand Passage, the Lents received word that an assistant keeper was no longer needed since the light was being automated. After having extolled all the advantages of returning to civilization to their disappointed children, the Lents learned that the position of assistant keeper was available at Brier Island Lighthouse, five miles away. Though the move wasnt far, they did have to go from a home with electricity, indoor bathroom, but no phone to one with a phone, but without electricity or an indoor bathroom.

The original lighthouse at Grand Passage was demolished in 1968 and replaced by the current one, a white square concrete tower with a red lantern room connected to one corner of a square, flat-roofed, one-story building.

Lawrence F. (Pete) Welch had been keeper of Grand Passage Lighthouse, known locally as North Light, for four years when it was de-staffed in 1988. The stations fog bell can be seen at the post office in Digby, where it is part of a memorial to those lost at sea.

For a larger map of Grand Passage Lighthouse, click the lighthouse in the above map.

Leaving the ferry dock at Westport, turn right on Water Street and continue 1.6 km (1 mile) to Grand Passage Lighthouse. The road will become a gravel road after roughly 1 km. There is a parking area beside the light.