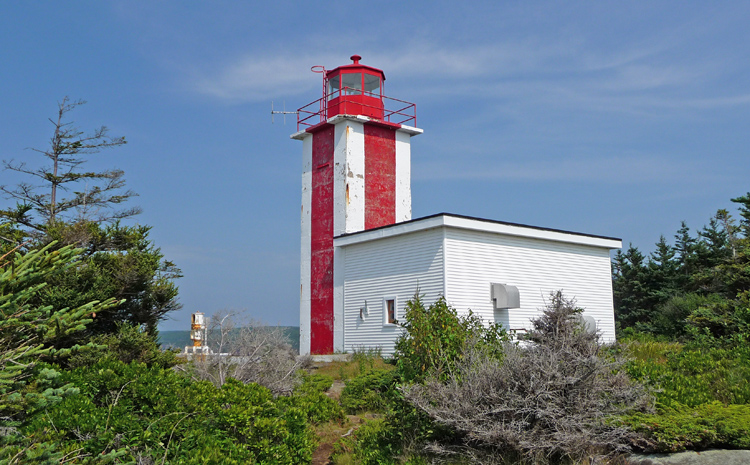 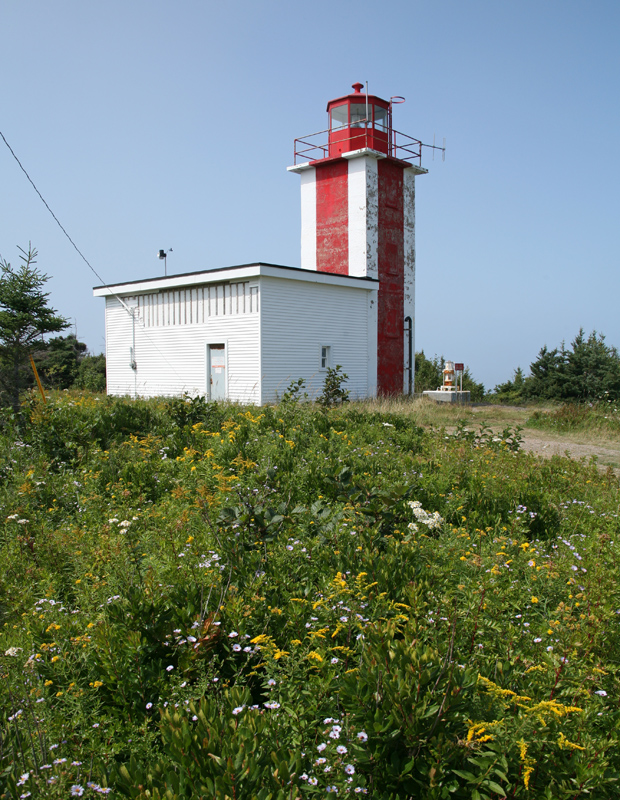 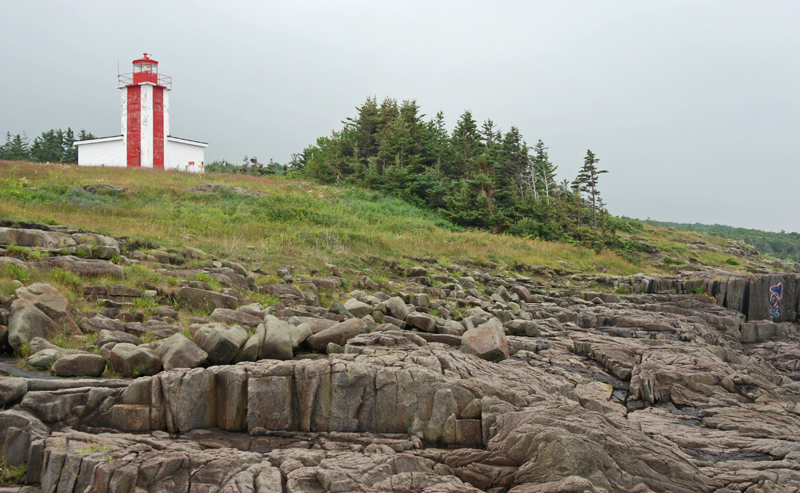 The current Prim Point Lighthouse is the fourth in a succession of lights that date back to 1804. Prim Point is located on the western side of the entrance to Digby Gut, the narrow channel that serves as the outlet to the Bay of Fundy for Annapolis Basin. In 1801, a petition signed by Richard Hill and other inhabitants of Digby calling for a lighthouse at the entrance to Digby Gut was read in the House of Assembly of Nova Scotia. A committee in the House recommended that a sum not exceeding £250 be provided for a lighthouse if a £100 subscription was paid by the inhabitants of the County of Annapolis to assist in its construction. It took a few years, but the lighthouse was finally lighted in 1804 after £77 was provided to have it completed. Prim Point Lighthouse was the third lighthouse built by the Province of Nova Scotia, after those on Sambro Island and Cape Roseway.

The 1804 lighthouse lasted just four years before burning down in 1808, and it wasn't until 1817 that its replacement was built. This time, the government provided £400 to go along with another £100 subscribed by the inhabitants of the county to construct the lighthouse. The second Prim Point Lighthouse was a square dwelling, painted white with red vertical stripes on its northern and two adjoining sides. The light was shown from a bay window located on the north end of the dwelling.

The importance of Prim Point Lighthouse increased after the steamship Empress, which was built in 1865, began making regular runs between Saint John, New Brunswick and Digby. This route saw even more passengers after 1869, when train service was established between Annapolis and Halifax. To better serve the steamships, a power steam fog whistle was placed in operation at Prim Point on December 29, 1871, sounding an eight-second blast each minute during the frequent fogs that mariners face on the Bay of Fundy. Messrs. George Fleming & Sons provided the steam whistle machinery for $1,900, and Timothy Daly built the whistle building on the point for $1,750.

Richard Bragg, who immigrated from England with his family, was appointed the first keeper of the 1817 lighthouse. He served until his death in 1839, after which his son Frederick took charge of the lighthouse and served until his retirement in 1871. The Annual Report of the Department of Marine and Fisheries records the fate of the lighthouse in 1873, just two years after the end of the fifty-four years of service by the Bragg family.

On the night of the 16th of March, the lighthouse at Point Prim, at the entrance to Digby Gut, was entirely destroyed by fire, which was supposed to have originated in the lantern, which was very small and confined. In spite of the efforts of the keeper, the lighthouse and all its contents were burned to the ground. A temporary light has since then been exhibited from a small lantern placed on the top of the engine house, distant only a few yards from the old site. But little real damage was caused by this fire, as the building destroyed was old, and every year becoming more and more unfit for the purposes of a Lighthouse.

The third Prim Point Lighthouse, built in 1874, was a square wooden tower with sloping sides, built into the northern end of one-and-a-half-story dwelling with a gabled roof. Red vertical stripes adorned the tower to continue the stations daymark. The tower stood thirty-three feet tall from the ground to the lantern deck, where a twelve-sided, iron lantern room was installed. Lamps were arranged in two tiers on a framework in the centre of the lantern room. Five circular-lamps with twenty-inch reflectrors were used in the lower tier, and eight flat-wick lamps with eighteen-inch reflectors were used in the upper tier. The cost for the new lighthouse was $3,410.45.

A second family emerged to establish an even longer dynasty at Prim Point. Captain William Ellis became keeper in March 1875. Leander Ellis succeeded his father William as keeper in 1912, and his daughter Janet Wilson continued the familys run at the lighthouse until her husband, Frank Wilson, passed away in 1963.

Prim Point had a disastrous month just over a year after William Ellis became keeper. At six in the evening of June 19, 1876, the smokestack protruding from the roof of the fog alarm building caught fire. Efforts to fight the flames were futile, and the building was entirely destroyed. Only the boiler could be salvaged from the wreckage. A rough shed of boards was quickly erected, and the engine and steam pump intended for Cape Sable were diverted to Prim Point, where they were placed in operation with the old boiler on July 31, 1876. Daniel W. Clark built a new twenty-five-foot-square engine house for $1,749, and Fleming & Sons provided a replacement boiler for $1,000. The new fog alarm was placed in operation in February 1877.

As if the fog alarm fire wasnt enough excitement for Keeper Ellis, just six days later, lightning struck the lighthouse, not once but twice. The Annual Report of the Department of Marine for 1876 described the damage: It struck first on the west side of the tower, tearing off the laths and plaster in the room below the lantern, the next time it struck on the south east corner where the dwelling joins the tower and passing down into one of the rooms, burst off the lathing and plaster and destroyed some of the studding.

Keeper Ellis and his wife Mary would have had six children with them at the lighthouse when the lightning struck, and at least another seven children would be born after that.

Captain Ellis was still serving as keeper at Prim Point in 1910 when he spotted the steamer Westport entering Digby Gut with her under-deck cargo apparently on fire. Keeper Ellis telephoned for help, and the lifeboat Daring rushed to the steamer and safely offloaded her nine passengers. The steamer jettisoned the barrels of gasoline and kerosene she had on deck, and made her way to Digby, where she was safely beached at a safe distance from the government pier. The Digby Fire Department helped extinguish the fire, which along with the water, had ruined most of the cargo.

In 1889, the whistle house was relocated to a site closer to the edge of the cliff as the lighthouse and high ground were found to interrupt the signal. In this new location, vessels could deliver coal directly into the coal shed. A new fog alarm building was constructed in 1911, and a three-inch diaphone plant, provided by the Canadian Fog Signal Company at a cost of $6,163 was installed in it. The characteristic of the light was changed in 1910 from fixed white to a white flash every fifteen seconds through the installation of a revolving catoptric apparatus. The light and fog alarm were electrified in 1930.

Carman Frankland came to Prim Point as keeper in June 1963 and was present when roughly a year later, a bulldozer pushed the third Prim Point Lighthouse over the bluff on May 13, 1964. Central Construction Company was contracted to demolish the existing structures at the station and build a new lighthouse. The fourth lighthouse on Prim Point was built in the familiar form of a square tower rising from one corner of a one-story, flat-roofed fog alarm building. Visitors to the station today will still see the vertical red stripes that have been historically used at the station.

The Municipality of the District of Digby signed and returned an offer for Prim Point Lighthouse to the Department of Fisheries and Oceans (DFO) in September 2014, but it wasnt until June 2016 that ownership of the property was transferred. We are delighted to have finally settled this transfer process and get this spectacular piece of property into local hands, said Linda Gregory, Warden of the municipality. With the official transfer of Point Prim, DFO also released $25,000 to help with maintenance of the lighthouse. As part of the divestiture process, Prim Point Lighthouse was declared a heritage lighthouse in February 2015 under the Heritage Lighthouse Protection Act. A plaque recognizing this designation was unveiled at the lighthouse on September 14, 2019.

Friends of Point Prim, a non-profit organization, has been established to protect and improve the historic site.

For a larger map of Prim Point Lighthouse, click the lighthouse in the above map.

From Digby head north on Route 303 towards the Saint John ferry dock. Continue through the lights at the intersection with Route 217 and then turn left onto Culloden Road and make an immediate right onto Lighthouse Road. Follow Lighthouse Road for 7.1 km (4.4 miles) to Prim Point Lighthouse. Parking is available. The light is visible from the St. John - Digby Ferry.