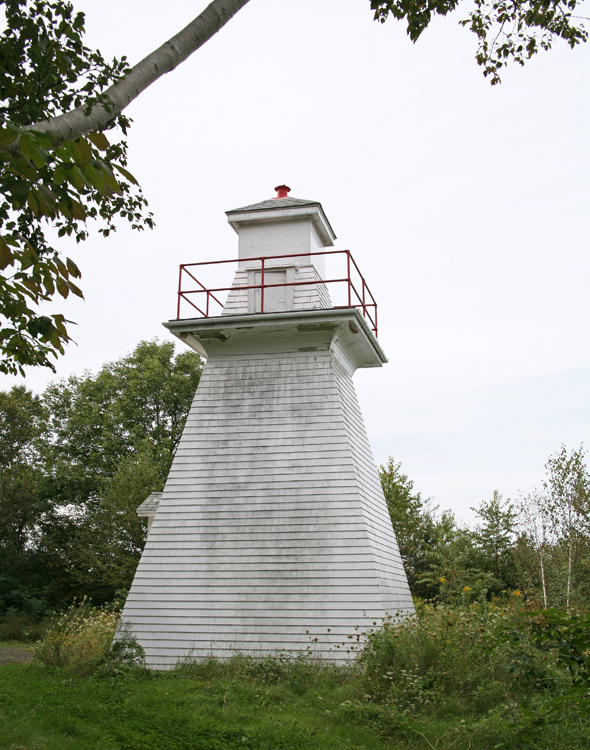 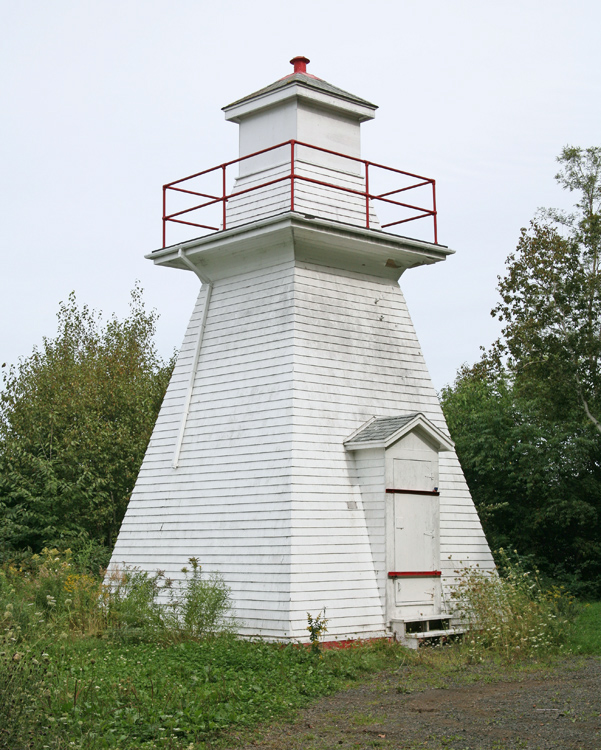 The 1905 Annual Report of the Department of Marine and Fisheries contains the following information on the construction of Bear River Lighthouse, which marked the entrance to Bear River from the Annapolis Basin.

A lighthouse was erected on Winchester Point, western side of entrance to Bear River, south side of Annapolis Basin, and was put into operation on May 1, 1905.

The building stands on ground 45 feet above high-water mark and 100 feet back from the water's edge. It is a wooden tower square in plan, with sloping sides, surmounted by a square wooden lantern, the whole painted white. It is 32 feet high from its base to the ventilator on the lantern.

The light is a fixed red dioptric light, of the seventh order, elevated 72 feet above high-water mark, and visible 9 miles from all points of approach by water.

This work was done by contract by John Roney, of Granville Ferry N.S., the contract price being $494.

When built, the lighthouse was situated in an open area, but it is now surrounded by dense woods. A great view of the light can be had for those traveling west on Highway 101. As you approach a bridge and an abandoned railroad trestle, the light sits on the right, high above the Bear River.

Bear River Lighthouse was automated in 1873 and decommissioned as a navigational aid in 2001.

On December 14, 2009, the Digby Town Council voted in favor of acquiring Bear River Lighthouse, while having the Bear River Lighthouse Society, formed in 2002, continue to care for the structure. Ownership of the lighthouse could have been handed over to the municipality from Transportation Canada as early as spring 2010, but the transfer was delayed many years.

I cant understand it, says Dorothy Gray of the Bear River Lighthouse Preservation Society in 2016. Last December we just needed a signature and now here it is August and were still waiting. The society had volunteers lined up to improve the access road to the site and clear the view to the Annapolis Basin. Everyone was gung-ho to get to work but it is kind of hard to do fundraising or call volunteers together until you really do have ownership, she said. I dont see what is so important or complicated about this tiny little quarter of an acre.

Bear River Lighthouse was designated a heritage lighthouse in 2015 for its support of the development of the scallop fishing and lumber industries, two significant economic drivers for the nearby town of Digby.

Finally, in 2021, the Municipality of Digby took ownership of the lighthouse, and Smith's Cove Historical Society developed plans to restore the tower and create a park that, after the removal of trees, will have a view of Annapolis Basin. A contractor started restoring the tower in August 2022.

Located on Winchester Point on the western side of the entrance to the Bear River, along the Evangeline Trail.
Latitude: 44.61693, Longitude: -65.68518

For a larger map of Bear River Lighthouse, click the lighthouse in the above map.