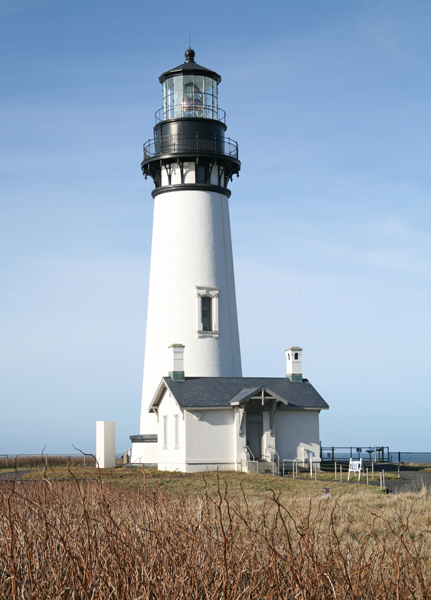 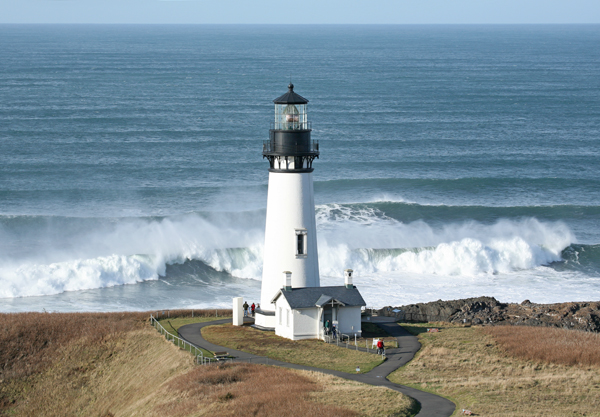 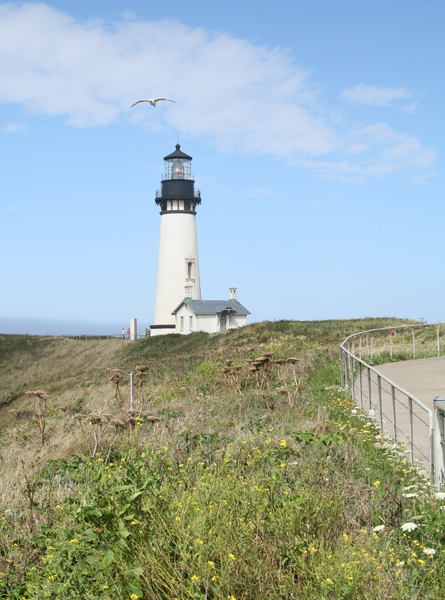 Yaquina Head Lighthouse can be a spooky place on a dark, cold, windy night. Stories are told of ghosts lurking and ship compasses not working.

It seems there has been trouble with the lighthouse from the beginning. After Congress appropriated $90,000, construction work began on September 1, 1871 but was often delayed due to the tempestuous Oregon winter. Lighters shuttling materials to shore in the cove on the south side of the head often had difficulty landing, and at least two overturned in the surf and lost their cargo. When landing was not possible at Yaquina Head, materials were offloaded at Newport and then had to be hauled six miles to the lighthouse site over an almost impassable road. The schooner engaged in bringing supplies up the coast from San Francisco twice got struck on the bar while trying to enter the harbor at Newport. The metalwork for the lighthouse was completed by Oregon Iron Works of Portland, Oregon in June 1872, and after persistent efforts to secure a charter from Portland to Yaquina Head failed, the material had to be shipped via San Francisco.

The tower, built with 370,000 bricks made by the Patent Brick Company of San Rafael, California, is double walled for insulation and dampness protection. One story, which has circulated for years, tells of a workman falling from the scaffolding into the hallow space between the masonry walls where his body could not be retrieved. A fine story, and perhaps an explanation for the stations purported ghost, but records show no workers were killed during construction. Strong winds did blow one worker off the bluffs near the construction site, but amazingly, his oils skins acted somewhat like a parachute and he only received minor injuries.

The keepers dwelling was finished in September 1872, and the lighthouse was ready to receive its lantern room around the end of the year when it was discovered that three of the sixteen wooden crates filled with pieces of the lantern room had been lost at sea. The captain of the vessel carrying the cargo ordered the crates tossed overboard as his vessel was in stress of weather. Finally, after almost two years of toil, the towers fixed white light, produced by a Barbier & Fenestre first-order Fresnel lens and a four-wick, lard-oil lamp, shone for the first time on August 20, 1873. Fayette Crosby, the first head keeper, lived in half of the two-story duplex, constructed seventy feet east of the lighthouse, while his two assistants shared the other side. Prior to his arrival at Yaquina Head, Keeper Crosby had served from 1857 to 1860 as keeper of Umpqua River Lighthouse and from 1869 to 1870 as an assistant keeper at Cape Arago Lighthouse.

At ninety-three feet, Yaquina Head is the tallest tower on the Oregon coast and is a shorter sibling to Pigeon Point Lighthouse, California and Bodie Island Lighthouse, North Carolina, which were built at the same time. The towers light shines 162 feet above the ocean and can be seen nineteen miles out to sea.

Given its exposed location, the station was in a constant battle with nature. The report of the Lighthouse Board for 1880 describes the struggle.

This is ... an exposed headland where violent gusts of wind are not infrequent. The soil near the upper surface is very friable and is filled with gravel and small pebbles. During squalls the face of the cliff is swept by the winds and great quantities of sand and gravel are lifted from their beds and driven against the buildings, injuring the shutters and breaking the glass. To screen the station in a moderate degree against this influence a close board fence about 8 feet high was built, in August, around the crest of the bluff close up to the margin, to arrest as far as practicable the flight of the gravel and throw it back upon the beach below. It has worked very satisfactorily. In January, the roof of the dwelling was greatly injured, the fences were blown down, the pickets broken off, and the displaced material scattered, drift-like, over the station. In October and January, sea-fowls broke, in the nighttime, several panes of glass in the lantern.

Mineral-oil lamps replaced the stations lard-oil lamps in 1888, and a galvanized-iron oil house was built to store the volatile fluid.

The following report, dated October 18, 1920, was filed by the keeper of Yaquina Head Lighthouse. Last night lightning struck the office and storeroom building. It tore off the copper, lead, and shingles where the roof joins on to the tower; it struck all four corners and followed the water pipes down to the ground and shattered tiles that the pipes run into. It also tore off the molding in the hallway. It struck another place near the ground and scorched and blackened the paint and tore up the ground about 6 feet. The office and storeroom are housed in a small brick building connected to the base of the tower by a passageway. This structure was not equipped with a lightning rod, as it was thought that the rod atop the much taller lighthouse would provide sufficient protection, but after this incident, one was installed.

In 1899, the Lighthouse Board requested funds to construct an additional dwelling for the keepers, but despite repeated requests, the allocation was not made until 1919. By this time, the second assistant had moved out of the duplex and was living in a storehouse. No bids were submitted when the construction of the new dwelling was first advertised in 1920, and when the work was readvertised the following year, all the received bids were rejected for being excessive. A modified bid was finally accepted in 1922, and a one-story residence with a concrete basement was completed that year. The new dwelling, built east of the original duplex, can be seen in this postcard. The historic duplex was torn down in 1938 and replaced by a smaller dwelling.

Another story circulating as an explanation of the stations ghost was told by Keeper William Smiths granddaughter-in-law. In the 1920s, Keeper William Smith reportedly went into town with his family leaving assistants Herbert Higgins and Frank Story in charge. Higgins fell ill, and Story got drunk. Seeing that Story had not tended the light, Higgins got out of bed and climbed the tower only to collapse on the landing near the lantern room.

From Newport, Keeper Smith noticed that his light was not shining and hurried back to the lighthouse. Upon his arrival, he found Higgins dead and Story inebriated. After that, Story, filled with guilt, feared Higgins ghost and always took his bulldog into the tower during his watch.

A great tale, but unfortunately not supported by the facts that Story and Higgins didnt serve at the same time at Yaquina Head and Higgins didnt meet his demise in the tower. Rather, Higgins left the Lighthouse Service before 1920 and returned to live with his mother in Portland. Second Assistant Keeper did die of a heart attack in the watchroom atop the tower in March 1921, but he too served before the arrival of Frank Story.

But whether or not the stations ghost was that of Herbert Higgins, John Zenor, a stocky, curly haired character, who served at the station from 1932 to 1954, reported encounters with the ghost. Someone unseen would come in and go up the spiral stairs, Zeno claimed. After the war [World War II] we never heard him again.

Ships passing close to Yaquina Head have reported their compasses going awry. While eerie, there is a simple explanation for this. The outcropping on which the lighthouse sits contains a vein of magnetized iron, and if a ship passes too close, a traditional compass will not give an accurate reading.

Yaquina Head Lighthouse has always been popular with visitors, whether seen or unseen. Keeper Zenor reported at times he would have up to 600 visitors in a day. In 1938, with close to 12,000 visitors, Yaquina Head was the fourth-most-visited lighthouse in the United States. Taking pride in what was considered one of the best maintained lighthouses on the West Coast, keepers requested visitors to take off their shoes before they crossed the marble rotunda and climbed the 114 stairs. After retiring following twenty-six years of service and hosting over 100,00 visitors, Zenor was known to have said he could never understand peoples fascination with lighthouses.

The station was electrified in 1933 and then automated on May 1, 1966, allowing the last two Coast Guard keepers to leave the station. The two keepers dwellings, which had been boarded up and abandoned, were demolished in 1984. The original lens is still in place, but is now illuminated with an electric bulb. Since 1939, the light has had a signature of two seconds on, two seconds off, two seconds on, then fourteen seconds off.

Mysterious occurrences continued to happen at Yaquina Head after its keepers left. In 1998, a person was taking Buddy, a five-year-old German shepherd, on a rainy night walk near the lighthouse when the dog fell over a cliff. Rescue workers were called out and could hear the dog barking on the beach below. After surveying the scene with search lights, it was determined that the only way to retrieve the dog was to rappel down the cliff. While the crew was waiting for additional help to arrive, the dog suddenly appeared uninjured by one of the fire trucks. No one could understand how he got up the slippery cliff.

In 1993, the Coast Guard turned the station over to Yaquina Head Outstanding Natural Area, managed by the Bureau of Land Management (BLM), and visitors were once again allowed to climb the tower, which had been closed to the public for several years. Friends of Yaquina Lighthouses works towards the preservation and interpretation of the lighthouse, and a thorough restoration of the tower, costing one million dollars, was completed in 2006. The restoration effort focused on repairing or replacing heavily eroded cast-iron pieces at the top of the tower. Nationally prominent metalsmith Alex Klahm, of St. Petersburg, Florida, supervised the work and supplied authentic iron and bronze castings to replace the most severely damaged parts. The lantern room, previously colored red and green, is now black, its original color.

Just south of the lighthouse are amazing tide pools where seaweed, sea stars, hermit crabs, purple urchins, and colorful anemones can be seen. The lighthouse is still quite popular, receiving over 400,000 visitors a year. It is only open to the public during daylight hours. Perhaps so no one gets spooked.

For a larger map of Yaquina Head Lighthouse, click the lighthouse in the above map.

From Highway 101 in Agate Beach, three miles north of Newport, turn west on Lighthouse Drive and follow it to the lighthouse.

The lighthouse is owned by the Bureau of Land Management and is part of the Yaquina Head Outstanding Natural Area. Grounds/tower open during posted hours.


Yaquina Head Lighthouse was used in the filming of the 1983 movie "Hysterical." The main character, Frederic Lansing (Bill Hudson), a writer from New York City, tries to escape to the remote lighthouse to write a great novel, but his plans are interrupted by a resident ghost. The two keeper's dwellings appear in the movie, but were torn down a year or so after the filming.

In 1948, several newspapers across the country carried the following tidbit: The longest straight-line east-west distance in the United States extends 2807 miles, from West Quoddy Head, Maine, to Yaquina Head, Oregon. Both headlands just happen to have lighthouses.