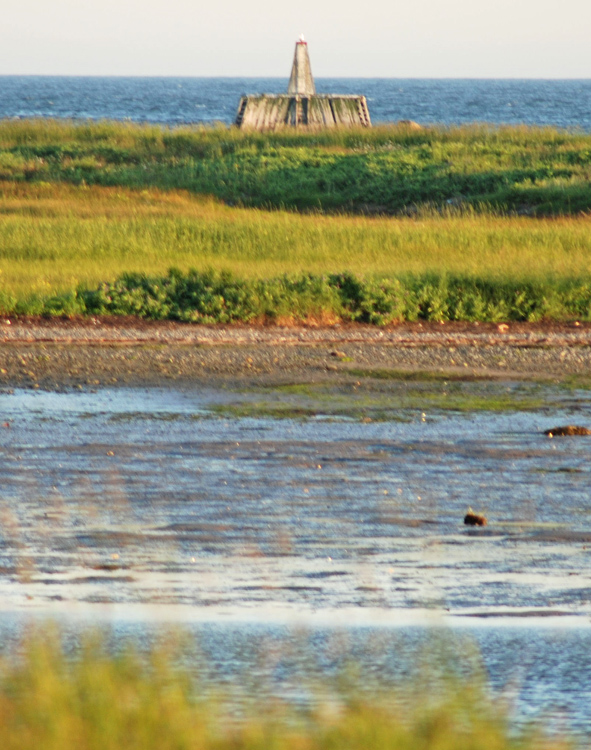 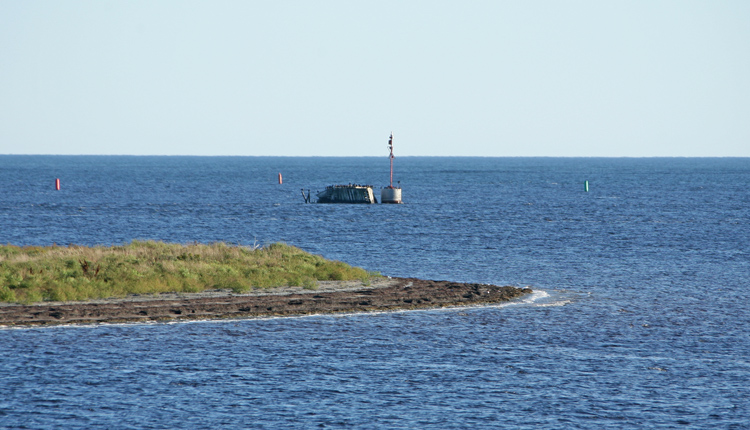 After having served with Admiral Horatio Nelson at the Battle of Trafalgar, William Thomas Kent was sent to Halifax where he kept the military prison on Melville Island. He married Elizabeth May, shortly after arriving in Halifax, and a few years later the couple moved to an island east of Halifax that had been granted to William for his service to the King. The island is known today as Kent Island, and several generations of the Kent family have resided there. In 1904, the Department of Marine publicized the activation of a set of range lights, one tower of which was located on Kent Island:

Range light towers have been erected at the entrance of Musquodoboit Inlet, from which lights were shown on the 1st April, 1904. Both towers are white, wooden inclosed structures, square in plan, with sloping sides, surmounted by white, square wooden lanterns with red roofs. The lights are fixed red lights, and the illuminating apparatus pressed glass lenses.

The back tower stands on French point, Kent Island, about 5/8 mile N. 31° E. from the front tower. It is 54 feet high from its base to the top of the ventilator on the lantern. The light is elevated 59 feet above high-water mark, and should be visible 4 miles from all points of approach by water.

The lights are intended to guide vessels in from sea to a safe anchorage inside of Steering Beach. The buildings were put up by days labour under the supervision of our Halifax officers, and under the foremanship of Mr. McLellan. They cost $2,512.

The rear light was originally placed on a knoll, but after it was discovered that the lights didnt range properly, the rear light was relocated and a straight-sided, 3.7-meter extension was built under it, giving the tower its unique shape.

John earned an annual salary of $100, while Jeremiah received $125 since his light was offshore. John died in 1908, and Archibald, his youngest son, took over as keeper of the rear light. Jeremiahs son Fred served as an assistant at both the front and rear lights.

In addition to his role at the light, Archibald also worked as a fishermen and farmer. When Archibald died in 1942 at the age of fifty-three, his wife Phoebe took care of the rear light with the help of her Ivan, her youngest son. Five of her sons were in the Royal Canadian Navy at the time and were fighting in World War II. Ivan took full responsibility for the rear light in 1945 and served until the range lights were automated in 1951.

Ivan lived in the house near the rear light that his grandfather had built in 186,1 and for over twenty years he and his wife Mildred ran the Seaview Fisherman's Home Bed and Breakfast in their home. Ivans great-grandfathers house was on the point right where the lighthouse is and was known to have a ghost. When they tore the house down to build the lighthouse, the ghost must have taken up residence in the tower. Guests at the B&B would often ask if there was a ghost in the lighthouse after having felt a presence there.

In an interview with Chris Mills in 2001, Ivan related the following story about the resident ghost:

We never knew who the ghost was. About 15 years ago, after Mildred started her bed and breakfast here, there was an old German lady come here from New York City and two of her nieces. One girl was from Switzerland and she didnt know any English at all. The other girl knew 16 languages and she had a license to teach 13 languages and was still goin to university!

Oh, she said, Thats unfortunate, but Im so happy theres a ghost there. Ive had several encounters with ghosts. I looked at her and she had the queerest look in her eyes and I thought to myself then, Shes psychic.

Well, we come back here to the house and the next day they spent in the city. They come back that night and there was a crowd here, sitting around talking. About nine oclock most went up to their rooms, but she stayed up. She was a most interesting girl to talk to and I discovered she could tell your fortune. Well, I had never believed much in fortune tellers. I said How do you like to tell fortunes? Oh, by readin your hands, she said. She come across the room and she read my hand and she went back and sit down and she told me my life story better than I could remember it myself. She could tell ya things in detail, a lot of it in fact, and I was gettin a little worried that she may know some things Id rather she didnt!

A month or two later we had a letter from her and she said I thought it was very important that you should know who the ghost is in the lighthouse, so, she said, I made it my business to find out. She said, The ghost in the lighthouse is the ghost of that great British Admiral, Lord Horatio Nelson!

The guest didnt know of the connection the Kent family had with Admiral Nelson, so Ivan thought just maybe she was right.

The front and rear towers were marked with a red vertical stripe in 1972. In 1985 and again in 1987, notice was given that the range lights were going to be discontinued, but Ivan Kent was able to rally enough local support to prevent that from happening.

Ivan Kent passed away in 2008. The old Kent family home is privately owned and no longer operates as a B&B.

For a larger map of Musquodoboit Harbour (Range Front) Lighthouse, click the lighthouse in the above map.