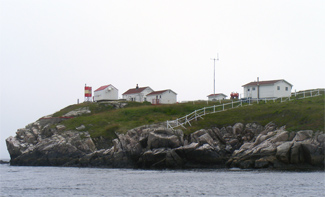 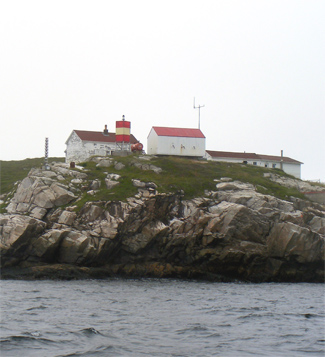 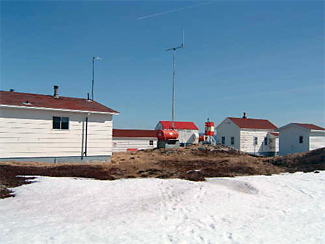 Pushthrough was one of four new lights established in Newfoundland in 1916 to receive a new type of light. It was described in the annual inspector's report as:

The illuminant used is Acetylene, the most luminiferous of all gasses, the light energy of the Acetylene flame is many times greater than that of oil or Petroleum flames, and when surrounded by a lens is more effective.

Supplied with each of these lights is a more ingenious gas saving device called a Sun Valve, by means of which it is made possible to light and extinguish the flame without the aid of a keeper, thus doing away with his services.

This type of light is largely used in American and Canadian waters, and has proven itself efficient in our service since its introduction.

The tower was originally a wooden, open-frame structure that showed twenty white flashes per minute.

A resettled fishing community, Pushthrough is located on the south coast, about twenty kilometres northwest of Hermitage. At the western entrance to Bay d'Espoir, Pushthrough was for many years a distribution centre for Bay d'Espoir as well as for fishing communities on the coast to the west. The name Pushthrough is descriptive of Pushthrough Gut (a narrow channel between the mainland and an off-lying island, Dawson's Point) which is subject to tidal currents and to surging waters during southerly gales. Settlement was concentrated around the Gut, along the shores of Dawson's Point and at Western Harbour (locally "the Bottom"), on the mainland west of the Gut.

Although the light was initially known as Pushthrough, it was actually located on Dawson's Point. At some point, a keeper was stationed at Dawson's Point and other buildings were erected. This photograph shows the station in 1990, when the light was shown from a square, pyramidal tower.

Today, the light at Dawson's Point is shown from a square skeletal tower with two red and one white horizontal bands serving as a daymark. Besides a one-story keeper's dwelling, several utility buildings are positioned on the point.

Located on Dawson's Point, east of McCallum and near the former site of the resettled community of Pushthrough.
Latitude: 47.6433, Longitude: -56.1493

For a larger map of Dawson's Point Lighthouse, click the lighthouse in the above map.

Dawson's Point Lighthouse is best seen by boat or from the air. It is likely possible to get a distant view of the lighthouse on a clear day from the Gaultois - McCallum - Hermitage Ferry.