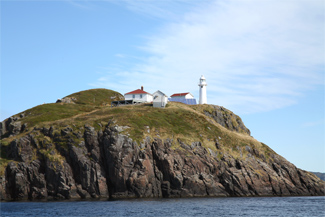 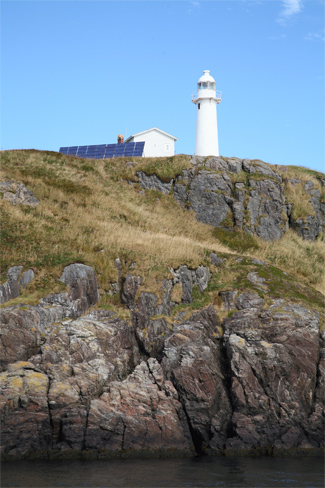 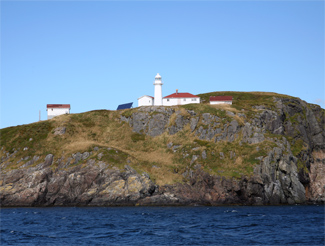 St. Jacques is located on the northern shore of Fortune Bay, and in the mid-1800s families moved to the community from Grand Bank to participate in the booming herring fishery, which provided bait to schooners fishing the Grand Banks. By 1891, Burkes and Young had a prosperous bank fishing firm at St. Jacques, and the community became the parish seat for the Roman Catholic communities of inner Fortune Bay. A convent and school was established there in 1894, and for a while Conrad FitzGerald of St. Jacques was the inner bays only resident doctor. St. Jacques was being considered for a lighthouse as early as 1885, when Austin Oke visited the community to examine possible sites. In 1894, Inspector John T. Nevill noted that St. Jacques was growing in importance and its residents had repeatedly asked for a lighthouse. Nevill felt that St. Jacques Island, situated a short distance offshore from the mouth of the harbour at St. Jacques and consisting of two hummocks linked by a low neck, was the most suitable place for a lighthouse, as it was readily accessible and a light there would be useful for making the harbour and would have a commanding range over Fortune Bay.

Still, it wasnt until 1907 that a circular iron tower, twelve metres tall, was erected on the southeast end of the island along with a keepers dwelling. P.O. Burke, the stations first keeper, exhibited the light for the first time in the spring of 1908. A fourth-order Fresnel lens, supplied by Chance Brothers of England, was used in the towers lantern room to produce a white light that was alternately steady for seven seconds and then eclipsed for three seconds. Because of its cliff-top location, the light had a focal plane of forty metres.

A new landing boom was installed at the station in 1918, and in 1928 arrangements were made for establishing a fog alarm on St. Jacques Island. Housed in a white, flat-roofed engine house and powered by air compressed by an oil engine, the alarm commenced operation in 1929, giving a two-second blast in every forty-five seconds as needed. Joseph Penney, the keeper at the time, was responsible for both the light and fog alarm, and in 1935 his assistant was Thomas Harry Young.

The light was changed to fixed white in 1930, and a new keepers dwelling was built on St. Jacques Island in 1950.

Eric and Katherine Fiander, who had been married for five years, were eagerly anticipating Christmas of 1963 on St. Jacques Island with their three small children: Alton (3), John (2), and Karen (1). Eric was an assistant keeper at the station, serving under Keeper Hubert Myles. By this time, there were two dwellings on the island, and a diesel generator, housed in its own building, provided electricity for the lighthouse, fog alarm, and a few small appliances in the dwellings.

On Thursday, December 19, Eric was in charge of the station, as Hubert Myles was ashore on leave, but Myles nephew, seventeen-year-old Hughie Myles was on the island to provide help. That evening a tremendous storm arose that would buffet the station with 100 mph winds for the next two days. Mountainous waves struck the islands rocky face, sending water skyward that coated the side of the Fianders dwelling with seven inches of ice. Eric made one of his twice-daily radio calls to the Department of Transport (DOT) office at Burin at 10:30 a.m. on Friday morning, and at eleven oclock, he and Hughie went out in the storm to check on the lighthouse, fog alarm building, and a boat shed, which was located on the beach that joined the two lobes of the island. When the pair returned for lunch, they told Katherine that the wind had blown over the shed used to store the boats engine and other DOT equipment.

After lunch, the men grabbed some rope and headed down the cliff to the beach to secure the toppled shed until the storm passed. Around three oclock, Katherine thought she heard Erics voice calling her name above the howling wind calling. She was busy with the children at the time and didnt respond until she again heard Eric call Katherine!, only this time much louder. She responded What?, and then checked the basement, as that was where his voice seemed to be coming from, only to find it empty.

As the afternoon passed and the men still hadnt returned, Katherine grew anxious and doubted whether she had really heard Eric call her name. Knowing Eric and Hughie would be hungry after battling the storm for so long, she started preparing dinner while her mind made up excuse after excuse for why they hadnt returned. Perhaps the cliff had become too icy to climbperhaps they were staying in the shed until the storm passedperhaps. When darkness fell and the lighthouse and dwellings were without a light, Katherine decided she must go out and start the generator, but one look at the ice-coated lifeline that linked the dwelling and powerhouse convinced her it would be suicide to make the attempt.

After Katherine had the kids run around and play games to get warm, she put them to bed then spent a sleepless night wondering about her husband. The following day, she kept telling herself Eric and Hughie would return to the dwelling as soon as the storm abated. Katherine finally determined she had to venture out to the powerhouse and start the generator to get some heat into the house. After giving the children strict instructions to stay inside, she grasped the lifeline, bent into the wind, and slowly made her way across the station grounds. Katherine had seen others start the generator before but had never done so herself. She gave the handcrank several spins before giving up in defeat. She of course never realized that compression levers had to be pulled before cranking the engine.

Back in the dwelling, Katherine entertained the children and then searched for a light source before darkness enveloped the station once more. She was relieved to find an old kerosene lamp that would at least provide a small amount of heat and give her some solace during the night. Katherine considered making her way down to the beach, but rejected the thought realizing the children would be helpless if something happened to her.

The interminable second night without her husband finally passed and with it so did the howling winds. In the silence she listened anxiously for any indication of life and then went outside to scan the grounds. Katherine considered going down to the beach, but fear of not finding the men there and losing all hope kept her confined to the high ground. About noon a boat passed the island, and Katherine frantically waved a towel as a distress signal, but the boats occupants must have been looking elsewhere. A while later, she saw two men coming up the cliff and a wave of emotion swelled up inside her only to come crashing down when she discovered they were two friends from Coombs Cove, who had come looking for Eric. Realizing that her husband must be dead, she ran to the men screaming at the top of her lungs, Eric and Hughie are gone.

High water marks on the cliffs near the beach provided evidence that the seas must have swept the two men away while they were trying to secure the shed. Katherine packed up her three children and had the men take her from the island. The body of Hughie Myles was recovered on the beach the next day, but Erics body was never found.

Katherine went to live with her family in Rose Blanche and soon discovered she was expecting her fourth child, a fact her husband had died without knowing. Katherine gave birth to Eric Bruce on September 13, 1964, but the baby, a link to her deceased husband, died in his sleep just over a month later.

In 1968, staffing of the station was changed to a four-person rotational shift system, and one of the two dwellings was sold to J. Petite & Sons Ltd. and removed from the island.

The lighthouse, perched atop a thirty-metre-tall cliff, was declared a Recognized Federal Heritage Building in 1989. Besides the iron tower, a 1960 keepers dwelling, a 1970 generator building, and 1970 and 1999 equipment buildings remain standing on the island.

After the provincial government and local municipality showed no interest in St. Jacques Island Lighthouse, Alex Hickey formed the non-profit St. Jacques Island Heritage Corporation and submitted a business plan to the Department of Fisheries and Oceans. This kicked off three years of meetings and negotiating that culminated in the lighthouse be signed over to the non-profit. The heritage corporation successfully petitioned for the lighthouse to be declared a heritage lighthouse under the Heritage Lighthouse Protection Act of 2008. As of 2019, it is just one of sixteen lighthouses in Newfoundland and Labrador to have this designation.

A floating dock was installed at the lighthouse in 2019, which will help with the corporations plans to develop the keepers dwelling as a tourism rental facility and artist retreat that will generate funds for the preservation of the station.

For a larger map of St. Jacques Island Lighthouse, click the lighthouse in the above map.

Take Route 363 to the Town of St. Jacques-Coomb's Cove, where St. Jacques Island is visible. However, as the lighthouse is on the southern side of the lighthouse, you have to take a boat to get a view of the station.


In July of 1916, Keeper Isaac Burke saw a boat overturn, throwing two men into the sea, and promptly rowed his dory to St. Jacques to get help. Burke got Dr. Conrad Fitzgerald to take his boat the Albatross out to search for the men even though it was then dark. While scouring the shore near Back Cove, the Albatross was struck by the mail-steamer S.S. Hump, which had also joined in the search. Keeper Burke presumably died in the collision. The two men in the overturned vessel that prompted the rescue effort also perished.