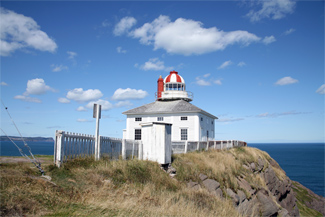 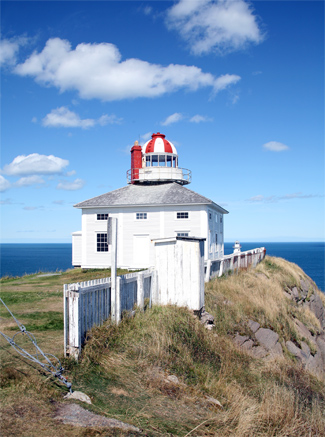 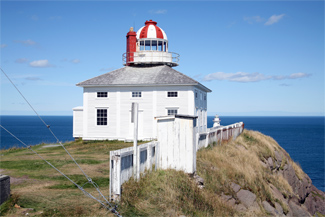 Cape Spear, the easternmost point in North America, is situated just south of the entrance to St. Johns Harbour and was a natural place to construct Newfoundlands first coastal lighthouse. A corruption of the French noun esperance, meaning hope, Cape Spear was likely named after the emotion felt by sailors upon reaching land after a lengthy ocean voyage.

In 1834, the newly formed representative government under Governor Thomas Cochrane passed An Act for the Establishment of Lighthouses, which among many things appointed five persons to serve as Commissioners of Lighthouses and authorized £1000 to be raised by loan for a lighthouse at Cape Spear. Governor Cochrane, accompanied by the Commissioners, the Commanding Royal Engineer, and the Surveyor General, visited Cape Spear in 1834 and selected a site for the lighthouse near the edge of a vertical seventy-three-metre sandstone cliff. Under a £400 contract, St. Johns builders Nichoals Croke and William Parker commenced work on the lighthouse that year, using plans from the Northern Lighthouse Board in Scotland. Stevenson and Sons of Scotland provided a copper domed lantern room with a diameter of ten feet for £335, and a twenty-eight-year-old lighting apparatus from Inchkeith Lighthouse on the Firth of Forth in Scotland was refurbished by the Scottish firm of McBride and Kerr at a cost of £628 for use at Cape Spear. To cover all the expenses, the government was forced to pass an act in 1835 authorizing an additional £500 to be raised by loan.

A square, two-storey, wooden residence, was completed in 1835, but the lighthouse could not be activated until September 1, 1836, due to the time needed for the lantern and lighting apparatus to arrive and be mounted atop the center of the lighthouses hipped roof. Each face of the building was divided into three bays or sections, using pilasters, and false windows were used to obtain a balanced facade. Initially fueled by sperm whale oil, the lighting apparatus had seven Argand burners set in silvered reflectors and revolved to produce a brilliant flash of light each minute.

On the morning of August 9, 1845, the arrival of Prince Henry of the Netherlands, the first foreign potentate to visit Newfoundland, was highly anticipated at St. Johns. Eager crowds lined both sides of the flag-draped route leading from Queens Wharf to Government House, but there was just one problem  the princes frigate Rhine was lost in dense fog that shrouded the approach to St. Johns. Six oared pilot boats were dispatched to find the prince, and it was James Cantwells boat that eventually spied the Rhine through a hole in the fog. Cantwell boarded the frigate and, despite the poor visibility, safely piloted the vessel through the Narrows to Queens Wharf.

A grateful Prince Henry presented Cantwell with a signed testimonial and asked him to name his reward. After a brief hesitation, Cantwell responded, Your Highness, I would like to be the lightkeeper at Cape Spear. The prince was able to procure the position with the added stipulation that it would belong to the Cantwell heirs as long as they desired. When Emanuel Warren, the first keeper at Cape Spear, passed away in 1846, the position was indeed given to James Cantwell, and six generations of the family subsequently looked after the light.

A small addition was made on the east side of the lighthouse in 1865 to provide two comfortable rooms for the assistant keeper. In 1874, kerosene lamps replaced seal oil lamps, which had been used in the lighthouse since 1841, and increased the brilliancy of the light so much that the keeper at Ferryland, fifty-eight kilometres away, noted the change.

A fog alarm for Cape Spear was being considered as early as 1858, but it wasnt until 1877 that a shed was built on the bill of the cape, 550 metres northeast of the lighthouse, to house a steam fog signal. A few ditches were cut in a nearby marsh to collect and convey the necessary water into a natural hollow, which had been enlarged, walled, and covered. From there, it was delivered by natural pressure to the alarm house. The fog signal was sounded for seven seconds in each minute during thick weather or snowstorms. A duplicate boiler was added in 1882 to make the signal more reliable.

In 1880, James Cantwell, described by the lighthouse inspector as a very old and generally esteemed servant, passed away after thirty-five years at Cape Spear. Keeper Austin Sheppard subsequently became keeper, but he was transferred to Fort Amherst in 1887 to replace his ailing father, and Dennis Cantwell, James son who had been running the fog alarm, was placed in charge of the entire station.

While the fog alarm aided vessels bound to St. Johns from the north, it could seldom be heard to the south, so on April 15, 1896, a second fog trumpet was placed in operation 137 metres southwest of the original one. The installation of a diaphone fog signal at Fort Amherst in 1908, allowed just one signal to be used at Cape Spear, and a new diaphone fog alarm was established near the site of the capes southern fog trumpet in 1910. The fog alarm building was painted white with a single horizontal red band and was located partway up the cliff.

A Fresnel lens and an incandescent oil vapour lamp replaced the original lighting apparatus in 1912, prompting unsolicited favourable praise from navigators. The characteristic of the new light was a triple flash every fifteen seconds. A new dwelling house, which was linked to the lighthouse by a covered passage, was also constructed at this time for a third keeper. The light source was changed to acetylene in 1916. After the lighthouse was electrified in 1930, a 500-watt bulb served as the light source, and an electric motor revolved the lens, replacing the weight-driven clockwork mechanism that had to be wound up every few hours.

The Cantwells felt the foghorn was too near the sea as water would wash around it during a heavy storm. In the early 1930s, Weston and Michael Cantwell were operating the fog alarm one night with the windows and doors closed to seal out the weather, ignorant of the fact that the diesel engine was slowly consuming all the oxygen in the building and giving off deadly carbon monoxide gas. In the lighthouse atop the cliff, Westons wife grew anxious over his delayed return and coaxed Jack Cantwell, who was in charge of the station, to accompany her to the whistle house. After making their way down the cliff clinging to the safety rope, they opened the fog building's iron door and discovered the brothers passed out on the floor. Jack dragged the two men to the door where the fresh air soon revived them. Weston was back to normal after a few days, but Michael passed away two years later, never having fully recovered.

In 1931, seventeen-year-old Margaret Hefferan accepted a job as a teacher for the eight children of the Cantwell brothers that were then serving as keepers. Ten years later, she married Frank Cantwell, the assistant keeper. War was on at that time, and it was an exciting time on the cape as thousands of soldiers and sailors were stationed there. Barracks were put up and fortifications were dug into the hillside for gun emplacements.

Just a couple of years after Newfoundland became the newest Canadian province in 1949, two new dwellings were built for the keepers followed in 1955 by a new concrete, octagonal tower that stands 13.7 metres tall. The Fresnel lens was transferred from the 1835 lighthouse to the new tower, where today it still produces a light with a signature of three white flashes every fifteen seconds.

Department of Transport officials had intended to tear down Newfoundlands oldest lighthouse, but the structure that had been home to the Cantwells for over 100 years was saved after the local historical society and other parties raised a storm of protest.

In 1977, Parks Canada embarked on a five-year restoration of Cape Spear Lighthouse, which had been declared a National Historic Site in 1962. After the numerous additions to the lighthouse were removed, the exterior restoration was completed in 1981. Interior restoration was finished early the following year, with period furnishings being installed to depict the keepers way of life in the late 1830s.

Cape Spear National Historic Park was officially opened by Prince Charles and Princess Diana on June 24, 1983. By that time, the 1950s assistant keepers dwelling had been remodeled to serve as a visitor reception centre for the site. The modern head keepers dwelling now houses an art gallery, operated by the Canadian Coast Guard Alumni, where over sixty Leslie Noseworthy paintings of Newfoundland lighthouses are on exhibit.

In 1957, nine-year-old Gerry Cantwell, son of Frank Cantwell, declared, I dont want to be a lightkeeper. Maybe Ill be a cop like Joe Friday on TV. However, as Gerry matured, he changed his mind and proudly took charge of the station in 1982. The Cantwell dynasty at Cape Spear ended in 1997, when Cape Spear was de-staffed and Gerry moved on to become Supervisor of Lightstation Operations for the Newfoundland and Labrador Region. Gerry retired from this role in 2009 and subsequently served as president of the Canadian Coast Guard Newfoundland Region Alumni Association.

Though the Cantwells are no longer in charge of Cape Spear, the future for the National Historic Park is definitely bright, which is fitting for the first place in America to be touched by each sunrise.

For a larger map of Cape Spear (Old) Lighthouse, click the lighthouse in the above map.

From the east end of Highway 2 in St. John's, exit onto Water Street. Drive south on Water Street for 0.9 km (0.6 miles), and then turn left onto Blackhead Road, and continue for 14.2 km (8.9 miles) to the parking lot at Cape Spear National Historic Site. The old Cape Spear Lighthouse is a short walk up a trail from the parking lot. Cape Spear Lighthouse is open daily between 10:30 a.m. and 5:30 p.m. from the first of June through early September, and on weekends for a few weeks before and after this period. Call (709) 772-5367 to receive more information or to confirm the hours of operation.

The lighthouse is owned by Parks Canada. Grounds/tower open.


The document presented to James Cantwell by Prince Henry of the Netherlands in 1845 still exists, having been passed down through the family. Visiting dignitaries were encouraged to sign the document, and it now bears the signatures of King George V, King George VI, Queen Elizabeth, Prince Charles, and Lady Diana.