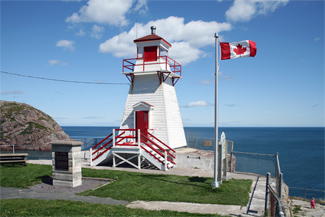 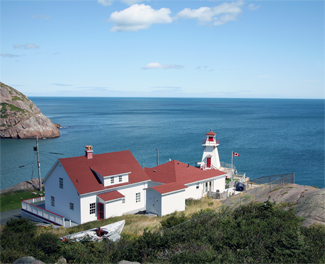 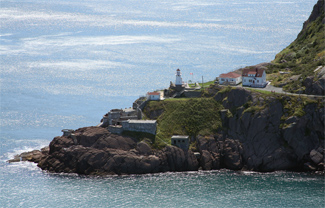 With its spacious natural harbour, whose entrance known as the Narrows is bracketed by South Head and North Head, St. Johns has long been the dominant settlement in Newfoundland. Sir Humphrey Gilbert claimed Newfoundland as an English colony in the name of Elizabeth I in 1583, but this move would be contested for several years.

In 1665, the Dutch sacked and burned St. Johns, prompting the English to establish fortifications known as Southside Castle at the entrance to the harbour. The French attacked St. Johns in 1696, 1705, and 1708, and after the third assault they destroyed Southside Castle before withdrawing. The French gained control of St. Johns for another brief period in 1762, before being chased off by Lieutenant Colonel William Amherst. After his victory, Amherst realized stronger fortifications were needed to protect the harbour entrance, and he had Fort Amherst, named after his brother Jeffrey who had helped defeat the French at Louisbourg in 1758, constructed on South Head.

Plans for Fort Amherst were drawn up in 1763, but the white-washed stone battery, backed by a wooden platform, was not completed until 1777. At the prompting of fishing and commercial interests, Newfoundlands first lighthouse, a stone tower, was erected inside Fort Amherst in 1813. The light was maintained by contributions until Newfoundland received representative government in 1832. The Commissioners of Lighthouses, appointed by Governor Thomas Cochrane, had some necessary repairs made to the lighthouse in 1834 and exhibited an improved light there on July 7 of that year, but they wanted a more effective Harbor Light built as early as possible. The projected cost for the new light was £70, but it would be several years until it was built.

Philip Roach was appointed the first civilian keeper of the light in 1834, but soldiers in the Royal Artillery retained the duty of firing a fog gun every half hour when Cape Spear was enveloped in fog. In 1843, the commissioners noted that the lighthouse was much shaken by the firings and the keeper was subjected to great annoyance and inconvenience from being confined to one single apartment for all his purposes. In January 1849, Patrick Kough, Superintendent of Lighthouses, wrote the following about Fort Amherst Lighthouse:

The lantern here is quite a flimsy concern; it was constructed about thirty years ago, and is now so infirm and decayed, as that, if touched at all, it must be renewed; but even this of itself would not be so important, if it were not for the fact that the whole concern is in such a decayed and worn-out condition, that it is difficult to determine at what point to begin.

A new lighthouse was finally erected in 1852, after the Lighthouse Commissioners succeeded in having control of Fort Amherst transferred from the British Government to the colony. As a matter of necessity, the lighthouse adjoined the forts barrack building, which was a thirty-five-foot by twenty-foot, two-storey structure. The lighthouse wing measured twelve feet by twenty feet and was centered on the western side of the barracks, giving the structure a T shape. The lighthouse, built by Kerr and Moody, was ready for occupation in the spring of 1853, when a lantern, ordered from Stevenson & Co. of Scotland, was scheduled to arrive. The lantern room was mounted atop the lighthouses pitched roof, and unlike the previous light, the new one also shone into the harbour, helping vessels exit as well as enter the Narrows.

Keeper Roach passed away in 1852, forcing Honora, his destitute wife, to petition the government for a small yearly grant in consideration of her late husbands service aboard Her Majestys warships and at the lighthouse. John Sheppard took over as keeper, and in 1855, a treble Argand burner placed in the focus of a new fourth-order annular lens was installed at Fort Amherst, which greatly increased the range of the light. The need for Keeper Sheppard to constantly attend this new light during the night seriously affected his health, and the appointment of an assistant was recommended. Sheppards son Austin was appointed assistant keeper, allowing John Sheppard to care for the light until 1887, a lengthy thirty-five years of service at Fort Amherst.

In 1886, John Nevill, the lighthouse inspector, noted that Keeper Sheppards health was failing, and that it was scarcely probable that he will ever be fully fit for duty again. A medical certification of the keepers poor health was made in January 1887, and in March, John Sheppard, who had begun his service as an assistant at Harbour Grace Island in 1836, was granted a retiring allowance. Austin Sheppard, who at this time was serving as keeper at Cape Spear, was transferred back to Fort Amherst to replace his father.

In 1901, an explosive signal consisting of gun cotton fired by electricity replaced the cannon at Fort Amherst. The cannon had cost seventy-five cents per charge, but the new signal cost just twenty-five cents, allowing it to be fired every twenty minutes. Still, the time between firings was considered too long, and in 1908 a diaphone fog signal, sounded by compressed air, was installed at Fort Amherst. When first installed, this new fog alarm gave a three-and-a-half-second blast followed by sixty-six seconds of silence, but it was modified a couple years later to produce the following signal: two-and-a-half-second-blast, ten seconds silence, two-and-a-half-second-blast, fifty-five seconds silence.

The characteristic of Fort Amherst Light was changed in 1912 from fixed white to an occulting white light that was alternately visible for two-and-a-half seconds and eclipsed for two-and-a-half-seconds. In 1919, an acetylene light was installed that produced twenty flashes per minute.

Austin Sheppard served as keeper at Fort Amherst until 1924, when his grandson, Robert Carl Sheppard, succeeded him. In 1934, Keeper Sheppard and his wife Sadie received permission to open the Narrows Tea Room in a large shed located just east of the lighthouse. The tearoom was a popular retreat for residents of St. Johns, but it was forced to close in 1939 as the space was needed for housing soldiers during World Ward II.

Robert Sheppard, a master mariner who had been wounded in World War I, resigned his position in 1939 and captained requisitioned merchant ships overseas for the British Admiralty. Ben Dalton took over as keeper, living in the stone lighthouse at Fort Amherst with his wife and five children. On March 3, 1941, German U-Boat 587 fired a torpedo at a steamer entering the Narrows, hoping to block the entrance to the important harbour, but the torpedo missed and struck the cliff just below the lighthouse. After this incident, Daltons family moved to St. Johns for the duration of the war.

After Newfoundland became part of Canada in 1949, the Department of Transport decided a new lighthouse and accommodations were needed at Fort Amherst. In 1951, two dwellings and the present twenty-five-foot-foot-tall wooden, pyramidal lighthouse were built on South Head, and the old stone lighthouse and barracks were demolished shortly thereafter.

Leo Power was appointed assistant keeper at Fort Amherst in 1943, and he took over as head keeper in 1953. Leo and his wife Nellie raised eleven children at the station. One Sunday, Nellie, who was pregnant at the time, was walking to church with her children when she slipped on the ice near the edge of the cliff. Her children screamed, Mommys going over the cliff!, but Nellie managed to grab a stick frozen in the ice and hold on until her son Leo put socks over his rubber boots and came to her rescue. Its a wonder any of us never fell over the cliff, Nellie said, it used to be so dangerous.

A small ceremony was held on August 20, 1970 to unveil a plaque at Fort Amherst, which had been designated a National Historic Site in 1951. Keeper Power retired in 1972 on his sixty-fifth birthday. Ed Brake took charge of the station until 1975, and then Con Bennett served as keeper until 1982, when the station was de-staffed.

In 1991, Jack Power, son of Keeper Leo Power, visited his childhood home at Fort Amherst with his wife Rosalind. They found signs on the two keepers dwellings saying For sale and removal, but the couple vowed to fight to save the structures. They wrote to the Canadian Coast Guard offering to lease the buildings, but while they were allowed to establish a temporary gallery in the larger dwelling in time for a 1992 reunion of Fort Amherst residents, it wasnt until the City of St. Johns assumed control of the property in 1995, that they were able to secure a thirty-year lease on the property.

After renovating the two-storey dwelling at their own expense, Jack and Rosalind opened it as a museum and tearoom in June 1998. The Powers then restored the smaller dwelling just in time for them to move in and watch the first sunrise of the new millennium from their kitchen window. The tearoom operated until 2006, when Jack Power passed away.

Peter Gill, a grandson of Leo Power, assumed control of the property in 2006 with his wife Nicole. The couple remodeled the smaller dwelling in 2007-2008 and started offering it as a vacation rental in 2011. The larger dwelling was subsequently remodeled and offered as a rental in 2013.

For a larger map of Fort Amherst Lighthouse, click the lighthouse in the above map.

From the east end of Highway 2 in St. John's, exit onto Water Street. Drive south on Water Street for 0.9 km (0.6 miles), and then turn left onto Blackhead Road, and then take your next left onto Southside Road. Follow Southside Road for 2.7 km (1.7 miles), around the south side of the harbour and then continue on Fort Amherst Road for 0.2 km (0.1 miles). At this point, just before the small community near Fort Amherst, you need to park in the provided parking spaces and walk the last 0.5 km (0.3 miles) to the lighthouse. One of the keeper's dwelling at the site formerly operated as Fort Amherst Museum and Tea Room, but it closed around 2006. Both the larger head keeper's dwelling and the smaller keeper's dwelling are now available as vacation rentals.


Getting right up to the lighthouse is always essential, but great views of the station can also be had from across The Narrows at Signal Hill, which was the site of the reception of the first transatlantic wireless signal by Guglielmo Marconi in 1901. Signal Hill is also a great place to catch a panoramic view of St. John's, but you can also get a great view of the city's colorful houses from the road near Fort Amherst.