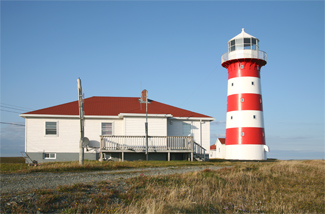 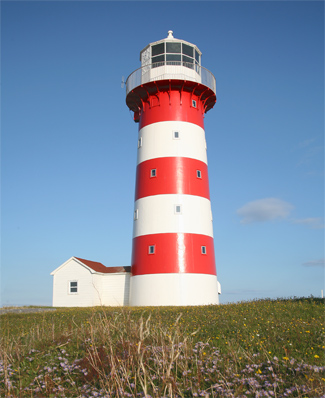 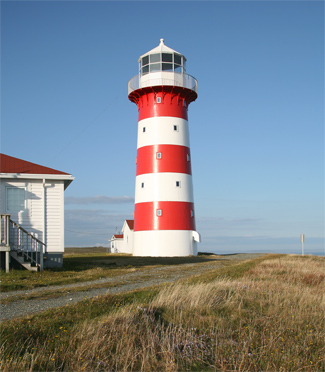 Cape Pine, a barren point just east of the southernmost point in Newfoundland, appeared on early Portuguese charts as C de pena, which translates to cape of punishment or sorrow. This name proved prophetic, as numerous shipwrecks occurred in the vicinity through the centuries. The HMS Harpooner left Quebec on October 27, 1816, bound for England with troops who had fought in the War of 1812, along with a number of women and children. At half past nine on the evening of November 10, the vessel struck a reef near Cape Pine and began taking on water. All lifeboats save one were swept away, and in this the mate and four other men set off for shore. Upon nearing the rocky coastline, their boat was dashed to pieces, but the men succeeded in reaching land. With no lifeboat and no help in the vicinity, the only chance for those aboard the Harpooner was to get a line to the men on shore. After other attempts failed, a rope was tied around a Newfoundland dog, which managed to swim to shore after being tossed overboard. Less than half of the Harpooner's 400 passengers had been rescued using the lifeline, before the vessel broke in pieces and sank.

In 1840, noting that a season scarcely passes by that does not serve to show how much loss of life and property would probably be prevented by a Light on the headland, the Commissioners of Lighthouses strongly recommended the establishment of a lighthouse at Cape Pine. As the light would primarily benefit the trade of the neighbouring British colonies, the commissioners were confident their governments would cheerfully contribute its maintenance.

Henry Prescott, Governor of Newfoundland, sent a letter to the Secretary of State of the Colonies in November 1840 requesting assistance from the British Government in erecting the lighthouse. As evidence of the need for the light, the letter referenced the numerous shipwrecks, attended with much loss of life, which had occurred during the past season on the southern shore of the island colony and noted the most narrow escape of her Majesty's Sloop Snake, in August last, owing to the great indraught in the neighbourhood of Cape Pine. In 1841, the Elder Brethren of Trinity House recommended that the British Parliament appropriate funds for a lighthouse on Cape Pine to serve all traffic bound to or from North America, provided the subsequent maintenance of the light would be defrayed by Newfoundland, with the possible aid of other North American colonies.

In 1843, the governor of Newfoundland sent a letter to his counterparts in Canada, Nova Scotia, New Brunswick and Prince Edward Island, suggesting that if those colonies would pay three-fourths of the annual maintenance expense, Newfoundland would cover the rest. It was soon learned that the commissioners had been wrong, as, burdened by the cost of maintaining their own lighthouses, the other colonies were not prepared to cheerfully contribute their share. Deciding to cover the maintenance themselves, the Newfoundland government passed an act on April 29, 1844 authorizing the expenditure of £500 annually.

In May 1847, the British Parliament granted £2,000 toward the construction of Cape Pine Lighthouse, and Captain Henry Bayfield of the Royal Navy was tasked with determining the necessary height and exact location of the light. Based on Bayfields report, it was determined that an iron lighthouse would be built on Cape Pine along with a beacon on Cape Race, where a proper lighthouse would eventually be needed. Captain Bayfield also recommended a fog alarm for Cape Pine, since during the summer months there was often not more than one day in a week free from fog. An additional sum of £3,000 was allocated for the project in 1848 and again in 1850.

Cape Pines iron tower was designed by Alexander Gordon, a British civil engineer, who was responsible for the 1841 Morant Point Lighthouse in Jamaica, the first iron lighthouse in the western hemisphere, and the 1846 Gibbs Hill Lighthouse in Bermuda. C. Robinson and Son of Pimlico, England manufactured the tower, while Deville and Company fabricated the lantern and lighting apparatus. The towers curved sections and other materials were landed in exposed Arnold Cove, located between Cape Pine and nearby Cape Freels, hoisted up a cliff, and then carted to the construction site. Work on the lighthouse was carried out during 1849 and 1850.

Painted in broad red and white horizontal bands, Cape Pine Lighthouse was initially equipped with a revolving lighting apparatus fitted with sixteen lamps and reflectors. While the tower measured seventeen metres tall, its light, a white flash every twenty seconds, had a focal plane of ninety-two metres thanks to the high headland on which it was erected. The completed lighthouse was turned over to Newfoundlands Commissioners of Lighthouses in November 1850, and they immediately arranged for the necessary supplies to be delivered to the station.

Keeper Henry Hearder made the inaugural lighting of Cape Pine Lighthouse on January 1, 1851, and just weeks later wrote the following letter to the Lighthouse Commissioners regarding the inadequacy of his accommodations:

GENTLEMEN, I beg leave to lay before you a statement of the Tower as a place of residence, for which it is by no means adapted. Judge of our situation when we cannot keep the Tower or porch doors shut with the fires in. Up to the present, the doors have not been shut during the winter, with the winds from N. N. E. to S. S. E. We are kept in constant agitation with our fires, and are sometimes obliged to put them out altogether. The smoke is very injurious to the reflectors and lamps, and causes a great deal of trouble. In gales of wind the draft running up the spiral stairs, thence to the light room, cause, much trouble and difficulty in keeping the machine to revolve in proper time, and this can only be remedied by keeping the doors closed, which obliges us to put out the fires, and makes it truly miserable for us to live in at this inclement season. However, I am happy to say the lights have steadily gone correct during the winter.

The joints in the Tower in several places are leaky, as are also the windows. The quantities of water come rushing in all directions; we have not had a dry bed since our arrival here. From our exposed and elevated position, the rain finds its way through every crevice - Nothing but a dwelling attached to the building (Tower) can possibly do here; for in common gales we cannot venture out on the cliff without risk of being blown over, there being no safety-fence at the cliff side.

Money was quickly allocated for a frame dwelling at Cape Pine, and this structure, which was attached to the tower by a covered passageway, was erected during the summer of 1851. A twenty-two-kilometre road connecting the station to Trepassey was also built that year, eliminating the dangerous task of landing supplies at Cape Pine. To prevent great wear and tear of the [lighting] machinery at Cape Pine, the time for one revolution was increased from one minute to ninety seconds. This change, which resulted in a flash every thirty seconds, was introduced on July 1, 1852.

When Keeper Hearder passed away in September 1866, George Hewitt, then serving as an assistant keeper at Cape Race, was reassigned to Cape Pine. Hewitt brought his wife and eight-month-old son, George J. Hewitt, with him, and over the next century three generations of the Hewitt family would look after Cape Pine Light.

In 1875, assistant keeper Thomas Doran was dismissed for being absent from the station without leave and replaced by William Costello, assistant keeper from Ferryland Lighthouse. Four years later, Costello was working on an addition to the assistant keepers portion of the dwelling when he had an accident, which narrowly escaped being fatal. Costello returned to Ferryland in 1882 to serve as keeper, and his descendants would care for that light until it was de-staffed in 1970.

In 1880, Cape Pines seventeen stationary lamps and reflectors were rearranged so that the entrance to Trepassey, formerly dark, was illuminated, and some landward regions, formerly illuminated, were darkened.

Though Captain Bayfield had recommended a fog alarm for Cape Pine in 1847, this much-needed navigational aid was not established in the vicinity until 1910, when a diaphone fog horn commenced operation on Cape Freels, just west of Cape Pine. Michael Myrick served as keeper of the fog alarm until 1935, when the fog signal was relocated to a site just down the slope from Cape Pine Lighthouse.

An acetylene light was installed at Cape Pine in 1928 that changed the characteristic from fixed to two white flashes every nine seconds.

In 1936, Theresa Molloy married George Thomas Hewitt, the third George Hewitt to serve as keeper of Cape Pine Lighthouse. She arrived at the station in a horse and carriage, and over the next twenty-three years raised nine children there. My husband George, recalls Theresa, made a fence out of barrel staves to pen the young ones in so they wouldnt go down the path to the whistle house or wander over the cliff. The older Hewitt children would walk to St. Shotts and board with families there to attend school during the week. To supplement their keepers salary, the Hewitts kept three cows, twelve sheep, and twenty hens, cultivated their own hay, and gathered bakeapples and cranberries off the land.

The original dwelling attached to the tower was demolished in the 1950s and replaced by the two single-storey residences that remain at the station today. Cape Pine Lighthouse was declared a National Historic Site in 1974 and a Recognized Federal Heritage Building in 1989. Peter Myrick, the last keeper at Cape Pine, served until the station was de-staffed in 1996.

For a larger map of Cape Pine Lighthouse, click the lighthouse in the above map.