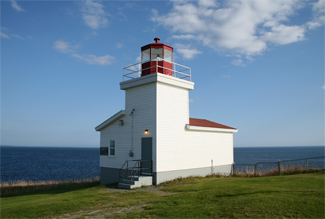 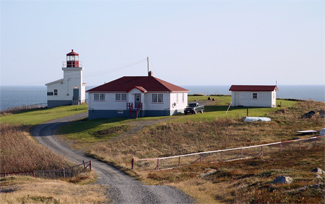 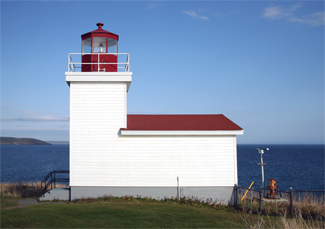 Powles Head is the southern end of a peninsula that forms the southern shore of Trepassey Harbour and is connected to the mainland by a narrow beach. In September of 1863, Alexander Bannerman, Governor of the Colony of Newfoundland, received a letter from Captain John Orlebar proposing the establishment of a light on Powles Head to guide vessels into Trepassey Harbour. During the winter months, the eastern coast of Newfoundland was often beset with ice, but if the weekly mail steamers could safely dock at Trepassey, the mail could then be sent overland to St. Johns. There was, however, just one problem  there was no road from Trepassey toward St. Johns. Captain Orlebar, accompanied by Robert Oke, Superintendent of Lighthouses, had visited Trepassey and selected a site for the light, the plans for which were later drawn up by Superintendent Oke. A road to Trepassey was completed not long thereafter, but it would be several decades before a light was finally built on Powles Head. Instead, a Courtenay automatic whistling buoy was anchored off Powles Head in June of 1880. The buoy went adrift that September and was retrieved by salvagers and remoored, only to break lose again and be destroyed. A new buoy, deployed in 1882, was dragged ashore by ice in February of 1883, prompting the decision to remove the buoy from service during the winter months.

On December 4, 1890, the buoy was torn from its moorings and went ashore near Cape Mutton. Some men retrieved the buoy but refused to return it to the government until they were paid $80. In 1895, the buoy was lost after going adrift yet again, and plans were made to replace the unreliable buoy with a light and fog alarm. Richard White, Inspector of Lighthouses, visited Trepassey and after investigating Powles Head and Pounder Cove, which respectively mark the eastern and western sides of the entrance to Trepassey Harbour, decided that Powles Head was most suitable. Inspector White noted that water was scarce at Powles Head but believed that springs could be discovered near the site.

Although Inspector White wrote in 1895 that a cast-iron tower, an illuminating apparatus, and a Champion foghorn were in storage and ready to be used, Powles Head did not receive its new light until 1902. The original Powles Head Lighthouse was a square, wooden tower, with sloping sides, attached to a wooden keepers dwelling by a 9.1-metre-long passageway. These structures were painted white, and the tower employed a fifth-order lens to alternately display one-second periods of light and darkness at a focal plane of thirty-one metres. John Devereux was hired as the first keeper of the light with J. Waddleton as his assistant.

A 4-ounce cartridge of gun cotton was exploded every twelve minutes during times of fog, and two explosions in quick succession were fired in answer to a ships signal. This form of fog alarm was adopted at Powles Head due to the difficulty of securing a supply of water for steam purposes, but the long period between explosions, adopted for economy, made the signal less than ideal. In 1905, there were eleven fog alarms in Newfoundland: three used steam powered, four employed gun cotton, one used a fog bell, and three were using oil engines to power a diaphone. Richard White suggested that all the fog signals be converted to diaphone alarms, which would save money in the long run.

In 1907, the fog alarm at Powles Head was changed to a diaphone that sounded five-seconds blasts separated by 112 seconds of silence. A flat-roofed, one-storey building was erected southeast of the lighthouse to house the alarm, and the diaphone horn projected from the southern side of this structure.

The wooden light tower was replaced by a round iron tower, painted white, in 1925, but the signature of the light remained the same. By 1960, this iron tower was thoroughly rusted, and it was replaced that year by the current combination light and fog alarm building, which has a square tower rising from one of its corners. In 1961, two keepers dwellings were built near the new lighthouse. Commercial power reached the station in 1970, and the diaphone fog signal was changed to an electronic signal in 1972.

Powles Head became a one-person station in 1990, and the assistant keepers dwelling was subsequently removed from the site. The station is no longer staffed, but its last keeper, Tom Corrigan, lived at the site for some time after his retirement.

For a larger map of Powles Head Lighthouse, click the lighthouse in the above map.

From Route 10 in Trepassey, turn south on Trepassey Road and continue for 6.7 km (4.2 miles) as the road changes to Lower Road and then Powles Head Road and ends at Powles Head Lighthouse. The last 4 km (2.5 miles) is over a dirt road.