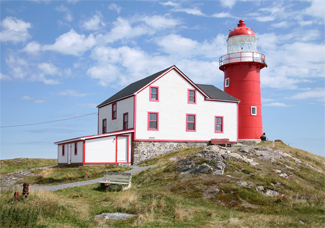 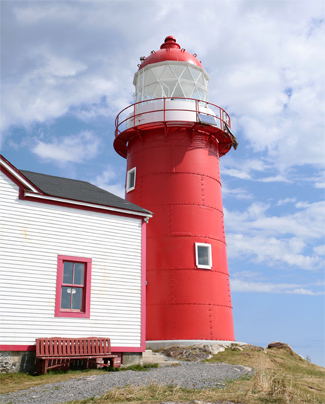 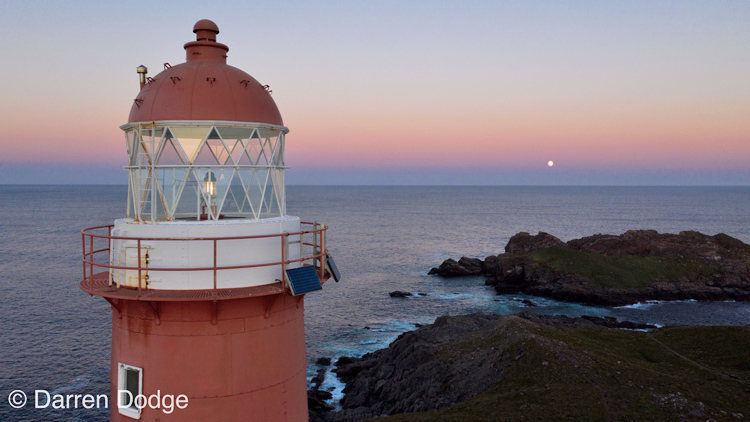 Jill Curran and Sonia OKeefe grew up in Newfoundland but left their outport communities to attend university. Jill received a degree in public relations and eventually moved to Scotland for work, while Sonia attended the prestigious Ballymaloe Cookery School in Ireland. During a Christmas spent together in Scotland in 2000, the homesick pair hatched the idea of offering picnic lunches at Ferryland Lighthouse, a special place for both of them. Jills great-grandfather John Costello was a keeper of the lighthouse and her grandmother was born there, and Sonia had fond memories of hiking around the lighthouse. The dwelling adjacent to the lighthouse had been abandoned for twenty years and was unusable when Jill and Sonia launched Lighthouse Picnics during the summer of 2003. Initially, food was prepared in Ferryland, transported to the site, and served from a stand. Inspired by their successful first year, the pair approached the Ferryland town council for permission to restore and occupy the lighthouse. With a small business loan, the entrepreneurial friends were able to restore the dwelling, outfit it with commercial grade equipment, and start using it for their business during the summer of 2004.

After enjoying a twenty-five minute stroll to the historic lighthouse, visitors order their lunch, grab a picnic blanket, plant a signal flag at their selected perch overlooking the Atlantic, and then wait for a gourmet lunch to arrive in a wicker basket with Mason jars of rosemary-scented lemonade. The possibility of seeing whales and icebergs passing offshore further enhances this truly Newfoundland experience.

Attracted by its fine natural harbour, formed by Ferryland Head and the isthmus, known as The Downs that connects it to land, Sir George Calvert purchased a tract of land at Ferryland in 1620. Calverts first settlers began arriving the following year, establishing a small community near the protected inner harbour, known as The Pool. Calvert, who had recently been given the title Lord Baltimore by King James I, moved to his Colony of Avalon in 1628, taking up residence in the Mansion House that had been built for him. After enduring marauding pirates and just one miserable winter, Lord Baltimore left his colony for warmer climes. He later established the colony of Maryland, and its main city, Baltimore, was named after him.

Located roughly midway between Cape Spear and Cape Race, Ferryland Head was an ideal location for a lighthouse, being itself an obstacle for mariners. In the spring of 1859, An Act to provide for the erection of a Lighthouse on or near Ferryland Head was passed by the Legislative Council and Assembly that authorized the construction of the lighthouse using light dues, but it would be a decade before the project was started. During 1869, William Campbell and Thomas Burridge were awarded a contract for building the light tower and dwelling, a road from Ferryland Beach to the construction site was put in, and arrangements were made with lighthouse engineers David and Thomas Stevenson of Edinburgh, Scotland to provide a lantern room and lens.

Work on the lighthouse was carried out during 1870 and 1871. The round, cylindrical light tower was built of stone and red brick and still retains its original lantern room, fitted with two rows of triangular panes of glass. Adjacent to the tower, a two-storey, pitched-roof dwelling was built for the keeper and his assistant. Austin Oke, the keeper at Harbour Grace Island Lighthouse, was sent to Ferryland to help install the lighting apparatus. The fixed white light from the towers third-order Fresnel lens was displayed for the first time on October 1, 1871.

Master boat-builder Michael Kearney was hired as the first keeper, with William Costello as his assistant. In 1875, John Nevill, the Lighthouse Inspector, received reports that the light had been out during the assistant keepers watch. After Nevill visited the station to investigate the matter, Costello was reassigned to Cape Pine Lighthouse, Kearney was reprimanded for irregularity, and Philip Keough was appointed the new assistant. Nevill noted that Ferrylands brick tower, just five years old, required repointing and should be coated either with paint or liquid glass. An experimental covering of silicate paint was applied to the tower in 1878, after other coatings had been ineffective.

As had been the case at Cape St. Marys, the brick tower at Ferryland continued to be a vexatious matter for the inspector. In 1881, Inspector Nevill noted, Every year new cracks show themselves in the bricks of the light tower, and seem of quite a mysterious character. If these were extensive settlements in the work, or failure of the foundations, or rupture of the work laterally by frost, they could be understood, but none of these are apparent and still the bricks break across - a brick here and a brick there and they have to be cut out and replaced by sound ones to keep out the weather.

Inspector Nevills annual reports for Ferryland continued to mention the failing brickwork and necessary repairs, and in 1887 he noted that the situation was so serious that a radical remedy will shortly have to be applied, either by casing with iron as was done last year at Cape St. Marys, or by removing the outer brickwork, and facing the structure with cement concrete. An iron casing was finally applied to the tower in 1892 and has served to protect the structure ever since. This bright red covering certainly lived up to Nevills prediction that it would make the building practically indestructible.

An outbreak of diphtheria struck Ferryland Lighthouse in October 1878. According to Inspector Nevill, the source of the infection was a shawl worn by a person suffering from the disease that was afterward used to wrap up one of Philip Keoughs children. Ten-year-old Mary Ann Keough passed away first followed the next day by her five-year-old brother. The Keoughs three-year-old twins, John and Catherine, died a week later. Tragically, only two of the Keoughs nine children would reach adulthood.

In April 1882, Philip Keough filed a formal complaint against Keeper Michael Kearney for serious neglect of duty. This charge followed rumours that the inspector had received from time to time about the light being neglected and having been out on a few occasions. After an enquiry by the Board of Works, Keeper Kearney was retired and William Costello returned to Ferryland from Cape Pine as head keeper.

On the afternoon of August 4, 1883, the Scandinavian ship Octavia, en route to St. Johns from Sydney, Nova Scotia, ran aground just offshore from Ferryland Head in a dense fog. Fortunately, it was within hailing distance of the lighthouse, and Philip Keough yelled for the crew to throw a line ashore. Once this line was secured, the crewmembers slowly made their way to safety. When the ninth and final person was making his way to shore, the rope snapped. Keough, with a rope secured about his waist, plunged into the surf at great risk and rescued the crewmember. For his bravery, Philip Keough was awarded a silver medal the following spring by the Royal Humane Society. After the passing of Philip Keough in 1893, members of the Costello family were exclusively employed as keepers at Ferryland.

A concrete-floored, frost-proof cellar was built under the keepers dwelling in 1886 as holes made by rats had rendered the old one insecure. It is hoped, wrote Inspector Nevill, that the new one will be both weather and rat-proof. Nevill had made the following request for Ferryland the previous year: An addition of the length of the house and 14 feet wide will give sufficient additional room and would also attain a very desirable end, namely, the separation of the keepers families as much as can be done while their houses are under one roof. At some later date, a cross-gable wing was added between the dwelling and tower.

On September 26, 1914, the collier S.S. Cacouna went ashore near the lighthouse and was a total loss. A few days later, the following Note of Thanks appeared in the Evening Telegram:

To the Lighthouse Keepers Costello and their wives, at Ferryland, that I, Captain Newman, Mrs. Newman, engineers, officers and crew of the S.S. Cacouna wish to express our appreciation of the kindness and hospitality extended to us during our short stay with them after our rescue from the wreck. We can only speak in the highest terms of the kindness and attention extended to us by the above named people.
Signed on behalf of the engineers, officers, and crew. J. L. Newman.

William Costello served as keeper until 1905, when his son John William took over. During John Costellos service, a kerosene vapour light was installed in the lantern room by a Mr. Tickle, an agent from Chance Brothers. This new light, established on August 1, 1921, had the following characteristic: visible eighteen seconds, eclipse four seconds, visible four seconds, eclipse four seconds. The lens had been damaged by fire in 1919, but while measurements for a new one had been taken, it had not yet been supplied by the time the kerosene light was put in use. The light was electrified in 1931.

John Costello passed away in 1927 at the age of fifty-one and was replaced by his brother, Augustus. Ferryland Light was electrified in 1931, and in 1939, Agustus son William, known locally as Billy, took charge of the light.

The job of lightkeeping at Ferryland ended in 1970 with the retirement of William Costello, but the dwelling was not vacant for long as Gerry Squires moved in as part of Memorial University Extensions Services Artist-in-Residence program. Gerry, who spent the first part of his career as a commercial artist in Toronto before returning to his native Newfoundland, began offering art classes at the lighthouse in 1971. Some of Gerrys finest work, including The Ferryland Downs Series, was inspired by the rugged landscape at Ferryland Head.

After Gerry Squires left the lighthouse in 1983, the dwelling sat vacant for twenty years until new life was brought to it through the opening of Lighthouse Picnics. After a brief period of neglect, the lighthouse is now safely back in the hands of a member of the lighthouse-keeping Costello family.

For a larger map of Ferryland Head Lighthouse, click the lighthouse in the above map.

From Ferryland, proceed 1.3 km (0.8 miles) south on Route 10 and then turn left on Lighthouse Road. Pass the Colony of Avalon Interpretive Centre and a gift shop, drive up the hill, and continue to the parking lot at the end of the road, where you will find the path that leads to Ferryland Head Lighthouse. The 1 km (0.6 mile) walk to the lighthouse takes about twenty minutes.

The lighthouse is home to Lighthouse Picnics, which since 2003 has been offering gourmet picnic baskets filled with goodies that you can enjoy while admiring the scenery surrounding the lighthouse. Lighthouse Picnics is open daily except Mondays from late May through September between 11:30 a.m. to 5 p.m. Reservations can be made by calling (709) 363-7456.

The lighthouse is owned by the Town of Ferryland and leased to Lighthouse Picnics. Grounds open, dwelling open in season, tower closed.


What a great and unique use for a lighthouse! The rocky hillside surrounding Ferryland Lighthouse is a perfect setting for a gourmet picnic, and it is amazing how popular this pastime has become. You first place your order inside the lighthouse and then select a spot outside to spread your plaid picnic blanket, display your unique flag, and try not to salivate too much before your basket arrives. For our picnic, we selected a glazed ham, brie and green apple sandwich and a curried chicken with fresh mango & almond sandwich. These were served with lighthouse salad, fresh lemonade, and our choice of dessert - a date square and warm gingerbread with a vanilla sauce. The food was both delicious and plentiful - we packed up the leftovers and enjoyed them on the road later that day.

Kudos to the ladies with the foresight and ambition to provide such a memorable experience.