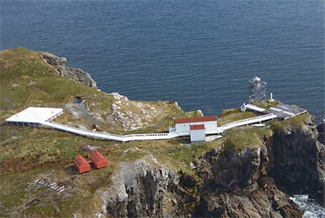 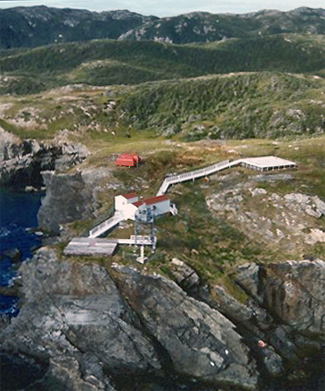 Situated on the northwestern shore of Placentia Bay and shaped like a dumbbell, Marticot Island is one-and-a-half miles long and nearly one mile wide and consists of two elevated parts joined by a low, marshy isthmus.

A lighthouse was established on the southeast tip of Marticot Island, one-half mile from its 337-foot summit, in 1909. The station featured a wooden, octagonal tower with sloping sides that had a height of thirty-six feet and a dwelling and storehouse. The lighthouse was painted white with two red, horizontal bands, while the dwelling was all white. Later, a new dwelling was built, and it was given a horizontal band as a daymark as well. The tower originally displayed an occulting white light with seven seconds of light followed by three seconds of darkness from a focal plane of ninety-three feet.

The first keeper of the lighthouse was P.J. Brown, and in 1921 Marticot Island was listed in the census as having nine residents, presumably the keeper and his family. In 1920, three acres of land were being cultivated by the keeper, yielding ten barrels of potatoes and 500 heads of cabbages.

The present square, skeletal tower was placed on Marticot Island sometime before 1998.

For a larger map of Marticot Island Lighthouse, click the lighthouse in the above map.

Marticot Island Lighthouse is best seen by boat or from the air.