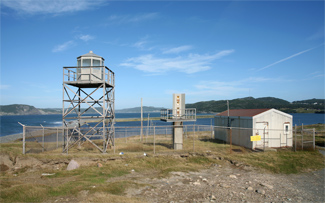 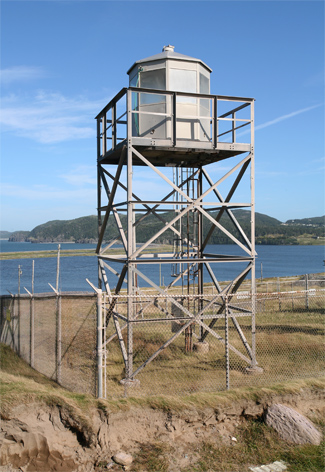 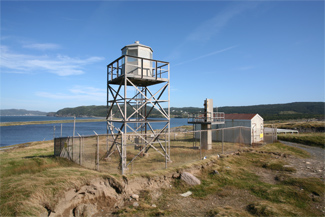 Point Verde is located just southwest of Placentia, which is known as the old French capital of Newfoundland. While Placentia was built on a stony beach, Point Verde (Green Point) possesses fine grasslands. One striking feature of Point Verde is the large ponds located near the headland. The two bodies of water used to be joined before a causeway was put in for the road that extends to the point. The first settlers at Point Verde were John and Robert Greene, who acquired the peninsula from Placentia merchants Saunders and Sweetman in 1803. The Greenes fished and cleared tuckamore to create extensive gardens and pastureland for their livestock. By the time of the first census in 1836, the community had a population of seventy-two.

In 1877, a Mr. Dwyer presented a petition to the Newfoundland House of Assembly from C. Irvine and other residents of Placentia and nearby communities calling for a lighthouse at Point Verde. It was noted that the lighthouse would cost about $4,000 and would be very useful for navigation in Placentia Bay and Harbour.

A design for the lighthouse was prepared and executed in 1878, and Point Verde Lighthouse was ready to receive its lantern room by the end of the year, but the lighting material had not arrived from Scotland in time, even though it had been ordered sufficiently early. The first Point Verde Lighthouse consisted of a rectangular, two-story, flat-roofed dwelling set atop a cement foundation with a square tower rising above its roof. A sixth-order lens was used to display a fixed white light at a focal plane of thirty metres.

Before work on constructing the lighthouse began, a short road was built to the nearest beach, and all the necessary material was landed there. In 1886, a bridge was built to access the Downs, some grassland near the lighthouse, from the main road to Placentia. To access the lighthouse, a road along the beach that was subject to flooding and being obliterated by heavy seas had to be used, as some owners of the Downs objected to their property being crossed.

When the Point Verde station was inspected in September of 1880, the facing was peeling off the concrete foundation walls, revealing the rottenness within. The worst parts were restored before winter set in that year, and the rest of the repair work was effected the following year.

With its exposed location, Point Verde Lighthouse was buffeted by the winds that accompanied many winter storms. By 1886, iron fastenings had been attached to the tower to prevent the excessive working that occurs during gales. These fastenings were tightened in 1887 to stabilize the lighthouse. Still, a gale in December of 1889 gave the lighthouse a good shaking and blew away the privy.

Erosion has long been a problem at Point Verde. In 1888, Inspector John T. Nevill noted that the sea was gradually encroaching on the bank near the lighthouse and suggested that a certain variety of grass be planted to maintain the face of the bank.

A flat-roofed structure was constructed 9.1 metres north of the lighthouse in 1912 to house a fog alarm. A fog horn protruded from the west end of the building, in line with the roofline, and would give a four-second blast every ninety-four seconds when needed. With the establishment of the fog alarm, the buildings at the station were painted with horizontal black and yellow bands.

In 1920 a square, pyramidal, open frame tower was built atop an enclosed base to support a new acetylene gas light, made by Chance Brothers of Birmingham, England. This new light flashed fourteen times each minute using a pattern of one second of light followed by 3.28 seconds of darkness. The tower was painted white, while the lantern housing the light was red. The enclosed wooden tower was removed from the old lighthouse at this time, but the dwelling portion was retained for the keeper.

James Joseph (Joe) Greene, a descendant of the Greenes that settled Point Verde, was having a hard time making a living as fisherman and was anxious to relocate his family to Boston where some of his relatives were thriving. Joe's wife Louise, however, was desperate to remain near her family at Point Verde so she reportedly contacted a family member who was high up in the government and begged him to try to get Joe an appointment as a lighthouse keeper. Her efforts succeeded, and Joe Greene started looking after the light at Point Verde around 1922. Joe and Louise had nine children, and when Joe passed away in 1945, their son Leonard was made keeper.

At some time during Joe Greene's service a wooden, square, pyramidal tower, topped by an octagonal lantern room and painted in red and white horizontal stripes, was built on Point Verde. The station's two dwellings and other outbuildings were also painted in the red and white daymark.

In 1975, a 3.7-metre tall, cylindrical fiberglass tower was erected for displaying the light at Point Verde. Besides this tower, a fog signal, and two, one-storey keepers dwellings were found on the point, and all of these structures were painted with red and white horizontal bands. The lighthouse was staffed until the early 1970s.

A square, steel skeletal tower surmounted by an enclosed lantern room was put in place at Point Verde in 1990. This tower, a fog signal, and a shed, all enclosed in a chain link fence are all that remain on the point.

For a larger map of Point Verde Lighthouse, click the lighthouse in the above map.