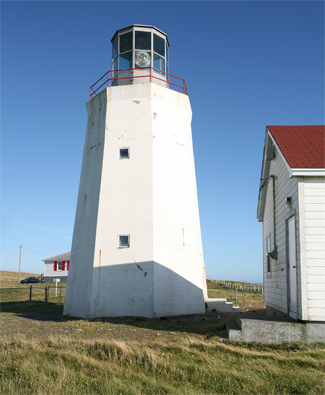 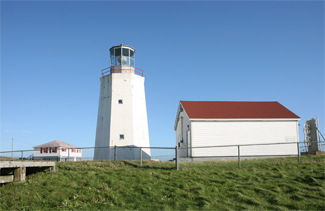 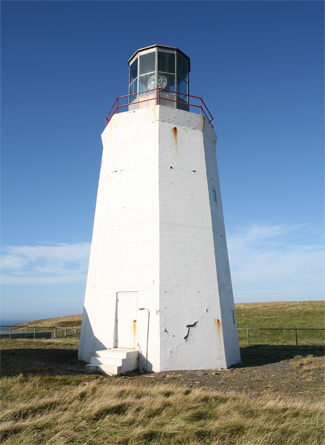 Located at the southwest tip of the Avalon Peninsula, Cape St. Marys is surrounded by what were once some of the richest fishing grounds in the world. Cape St. Marys pays for all is an old Newfoundland saying that meant any losses experienced during a poor fishing year could be quickly recouped by a trip to the cape.

The abundance of fish just offshore lead to the establishment of a gannet rookery on Bird Rock, a 100-metre-tall sea stack located near the cape. In 1953, noted naturalists Roger Tory Peterson and James Fisher hiked roughly twenty-seven kilometres to view the gannet colony. Peterson devoted an entire chapter in his book Wild America to Cape St. Marys and wrote that the gannets swirl past the cliff face like a blizzard of snow. Thanks to the completion of a road in 1966, the cape is now one of the most accessible seabird colonies in North America. Cape St. Marys Ecological Reserve was established in 1983, and in 1995 an interpretive centre was constructed to educate visitors about Cape St. Marys.

In 1858, Assemblyman George Hogsett called for the appointment of a committee to inquire into the advantages that would result from a lighthouse at Cape St. Marys. Hogsett was appointed chairman of the committee that took testimony on the matter and determined,there is no point on this Island more needing the erection of a Light House than Cape St. Mary's.

Robert Oke, Inspector of Lighthouses, testified that a light at Cape St. Marys would eliminate a thirty-five-kilometre dark space that existed between the lights at Dodding Head and Cape Pine. Captain Joseph Houlahan, who had been engaged in the fisheries for forty years, claimed the cape was the best fishing station in Newfoundland and that it would serve the roughly 2,000 boats from Conception Bay to Fortune Bay that fished there.

Given the preponderance of evidence, An Act for the Erection of a Light House on or near Cape St. Mary's, on the Western Coast of Newfoundland was passed on May 10, 1858, authorizing the Board of Works to procure plans for and erect the lighthouse. Inspector Oke and R. F. Sweetman, the contractor for the project, visited the cape in 1858 and selected its extreme point, a flat tableland, as the site for the lighthouse. From this location, the light would command an uninterrupted range seaward and shine over considerable portions of St. Marys and Placentia Bays.

The majority of the construction materials were delivered to the cape in 1858, and the foundations were laid that year. The lighthouse, which consisted of a circular brick tower flanked on opposite sides by one-and-a-half-storey frame dwellings for the keeper and his assistant, was ready to receive its lantern room by August 1859. On August 22, the lantern, along with a supply of oil and coal, was placed aboard the schooner Alice at St. Johns and dispatched to the cape. The lighting apparatus, provided by David and Thomas Stevenson, noted lighthouse engineers in Edinburgh, Scotland, arrived in St. Johns on September 8, and left for the cape the following day, along with Robert Oke, aboard the steamer Blue Jacket.

Heavy seas prevented both vessels from making a landing at Cape St. Marys so their cargo was offloaded at Great Placentia. A series of gales in September further frustrated efforts to land at the cape. In October, the Blue Jacket returned to Cape St. Marys, and it succeeded in landing the lantern room on October 11. Attempts to land the lighting apparatus the next day were unsuccessful, and after a week of boisterous weather, further landing attempts were abandoned and the apparatus was stored for the winter. The installation of the lantern room was completed on November 3, providing protection for the tower during the approaching winter.

After repeated attempts the following spring, the lighting apparatus was finally landed at the cape on July 16, and it was installed and adjusted by August 15. Cape St. Marys light, which consisted of twelve lamps and an equal number of lenses and reflectors and revolved to alternately produce a brilliant white and red light every minute, was lit for the first time on September 20, 1860.

John Reilly served as the first keeper of Cape St. Marys Lighthouse, assisted by William J. Collins. In December 1861, Inspector Oke learned that Keeper Reilly had for some time absented himself without leave from the station. The Lighthouse Commissioners inflicted a severe fine upon him, which they hoped would deter him or others from again violating one of the principal rules for the guidance of Light House Keepers.

This wasnt the last problem that would be had with keepers at Cape St. Marys. Keeper Reilly retired in 1881, and William J. Collins was made head keeper and Thomas Young the assistant. That October Collins reported that Young had behaved improperly, and Young was summoned to St. Johns to appear before the Board of Lighthouse Commissioners. Evidence showed that considerable blame belonged to the head keeper as well, and Collins was called to St. Johns. Both keepers were reprimanded by the Board, cautioned about their future behavior, and ordered to pay the expenses of the inquiry.

In 1892, it was noted that for some time past Collins and Young had not worked cordially together, and as this could be detrimental to the service, Young was sent to Cape Pine and Patrick Houlihan, the assistant there, was assigned to Cape St. Marys. Two years later, Collins retired and Houlihan was made head keeper, which resulted in the more economical use of stores and the better appearance of the light. Regarding this changed, Inspector Nevill wrote, It has relieved the office of the perpetual complaints and fault-finding of the retired keeper, and is altogether a step most advantageous in the service. In 1918, Keeper Houlihan was awarded the Imperial Service Medal, by approval of King George V, for his twenty-five years of service as head keeper at Cape St. Marys.

The keepers werent the only ones issue at Cape St. Marys for the lighthouse inspector. In 1869, after just a decade on the cape, the brick tower had to be repointed and coated with cement, and the beams and floor beneath the lantern room had to be repaired. In 1881, these beams and the lanterns freestone cornice and drum were replaced with cast iron. Two years later, the inspector noted that the cement encasing the tower had peeled off revealing rotten bricks beneath. The freestone base was also split and its stones were perishing, prompting Inspector Nevill to recommend that the masonry tower be encased in iron.

An iron casing was prepared in 1885, and the following year, it was applied to the tower with a backing of cement-concrete. The new iron covering was painted red, the same daymark used on the masonry tower. The inspector predicted that the annual and sometimes considerable repairs would not longer be required, while noting that the casing made a thoroughly safe building of one that has heretofore always been an annoyance.

In 1926, the original lighting apparatus was replaced by one of the most modern Kerosene lights, and the lights characteristic was changed to a group of three white flashes every thirty seconds. During the mid-1950s, the iron tower, rusted beyond repair, was encased in reinforced concrete, which gave the tower its current octagonal shape. The light was changed from kerosene to electricity in 1966, and in 2010, a directional coded beacon mounted inside the towers modern aluminum lantern room was producing a white flash every five seconds.

Using timber hauled in by horses, a new dwelling was constructed at the station in 1959 by James J. Hussey to replace one of the existing dwellings. Two other houses were built in 1963 with supplies hauled up the cliffs from boats below. The stations dwellings are currently used for a resident keeper and as housing for Cape St. Marys Ecological Reserve. The cement-covered, ironclad, masonry lighthouse was declared a Recognized Federal Heritage Building in 2007.

For a larger map of Cape St. Mary's Lighthouse, click the lighthouse in the above map.

From St. Bride's go east on Route 100 for 4.3 km (2.7 miles), and then turn right and drive 12.7 km (7.9 miles) to Cape St. Mary's Lighthouse. A visitor center for the surrounding Cape St. Mary's Ecological Reserve is located just before the lighthouse.