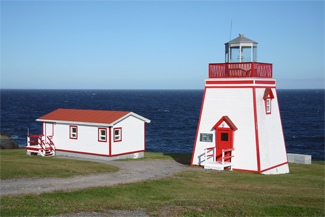 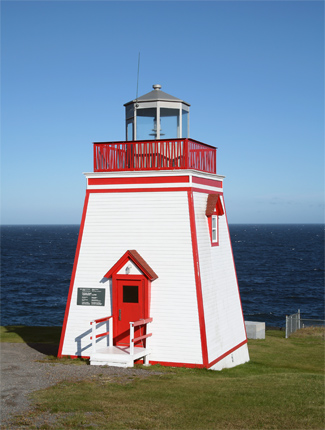 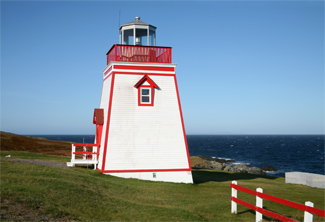 The Town of Fortune is located on the Burin Peninsula along the shores of Fortune Bay. Around 1800, John Lake, considered by many to be the founder of Fortune, happened upon the place when he was fishing for bait in Fortune Bay and was forced to seek shelter in its natural harbour during a storm. Lake moved to Fortune the next year with his brother, and they were soon joined by other families from Placentia Bay. The first official census conducted by the Newfoundland Government listed the population of Fortune as 163 in 1836, and by 1870, the population had risen to 669. The fishery has been the mainstay of Fortunes economy over the years. The harbour at Fortune was originally a barasway (barachois), a lagoon partially enclosed by a sandbar, making access to it problematic. A government dredge worked for six months in 1906 to improve access and increase the depth of the harbour. Additional improvements were made in 1911, when a square, wooden lighthouse, painted white, was established on the eastern pier in the harbour. A sixth-order lens mounted in the towers lantern room produced an occulting white light at an elevation of six metres, and W. King was appointed to serve as the lights first keeper. The wooden tower on the east pier was destroyed in 1960, and a pole was used in its place to display a fixed green light. In 2021, a cylindrical mask was displayng a flashing green light from the east pier.

On June 15, 1954 a lighthouse and fog alarm station was established on Fortune Head, just 1.6 kilometres southwest of Fortune, to assist mariners in navigating Fortune Bay. Maxwell G. Thornhill gave up his job as town engineer to become the first head keeper at starting annual salary of $2,520. Thornhill, who was twenty-seven at the time, had served as a keeper on Green Island from 1945 to 1947, before deciding the isolation was not for him. Initially there was no road to the station at Fortune Head, and it had no radio or telephone. Thornhill and the assistant keeper, Benjamin Monster, took turns serving six-hour watches and slept on a cot in the fog alarm building.

In 1956, the Department of Transportation built two residences at the station, but this did little to improve the isolation, as the keepers families had to live in town so the children could attend school. Finally, in 1968, a three-mile-long dirt road to the station was completed, and the families could live at the station year-round. That same year, electricity was extended to the station, and the diesel generators, which had been supplying electricity for the light since 1966, were relegated to backup use. Prior to the installation of the generators, kerosene had been used in the light.

The Thornhills had nine children, six sons and three daughters, and one of the chores given to them was to pump water. Rainwater was collected in a cistern beneath each of the dwellings and then pumped to a holding tank in the attic, from where it could be fed by gravity throughout the homes.

One day, two of the Thornhill children were playing in the familys Bell Air Chevy, which was less than a year old, when they accidentally knocked it out of gear. The car started to roll down the hill, headed for the cliff. Assistant Keeper Monster fortunately saw what was happening and yelled for the kids to jump out of the car. They managed to get out just before the car went over the cliff and tumbled into the sea. The car was in the water for four days, before the keepers floated her with drums and had her towed to Fortune. The Chevy must have been jinxed as the person who purchased the car after it was repaired drove it off the road and totaled it.

The revolving light at Fortune Head was displayed from a metal, pyramidal tower and would flash once every ten seconds, while the foghorn, when needed, would sound a three-second blast every thirty seconds. These unique patterns allowed mariners to distinguish the station from others on Fortune Bay. The foghorn at Fortune Head has retained the same characteristic through the years, but the light now flashes once every five seconds.

Keeper Thornhill was forced to retire from lightkeeping after having a heart while vacationing in Calgary in 1986. Four years later, the station was automated, and the whistle house, slipway, and two dwellings were all demolished. A new square, skeletal tower was erected to support the automatic light.

A geological survey in 1977 revealed numerous worm burrows and hyolithid fragments in the outcroppings at Fortune Head. Geologists from around the world visited the site the following year and found it to be rich in trace fossils. Further investigation found that the well-defined rock layers at Fortune Head distinctly showed the transition from the soft-bodied organisms of the Late Precambrian period to the shelled creatures of the Early Cambrian period.

In 1992, the International Union of Geological Sciences declared Fortune Head a Global Boundary Stratotype Section and Point, a location that serves as an accessible reference for a particular boundary on the geologic time scale. The fossil-bearing cliffs and surrounding area became Fortune Head Ecological Reserve on December 21, 1992, under the Wilderness and Ecological Reserves Act.

The reserve was officially opened on September 14, 1994, with the unveiling of a bronze plaque at the site. With the assistance of a $433,905 contribution from the Atlantic Canada Opportunities Agency, the Fortune Head Interpretation Center was opened in 2006 in a new building adjacent to the St. Pierre ferry terminal in Fortune.

With an influx of visitors to Fortune Head, the Coast Guard re-staffed the station and enclosed the utilitarian light tower at the site with sloping wooden sides to make it appear more like a traditional lighthouse. A small structure built next to the tower doubles as an office for the keeper, who is onsite only during traditional working hours, and as a visitor center for the reserve.

For a larger map of Fortune Head Lighthouse, click the lighthouse in the above map.

From Fortune, drive south on Route 220 for 2.7 km (1.7 miles), and then turn right onto a gravel road that leads to Fortune Head Lighthouse, which is adjacent to Fortune Head Ecological Reserve.