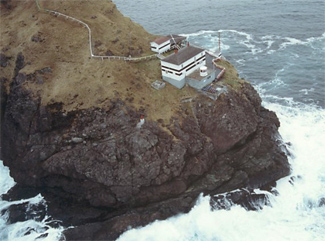 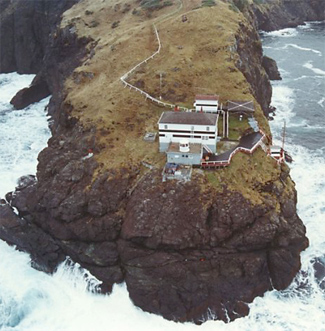 Located on the eastern side of the Burin Peninsula, Burin Inlet extends inland eight kilometres, and along its shores are found the various settlements, such as Burin Bay, Collins Cove, Kirbys Cove, Ship Cove, and Little Salmonier, that make up the town of Burin.

According to legend, Burin Inlet received its name when a French sailor standing on the deck of his ship holding a burin, French for chisel, was struck by how closely the shape of the inlet resembled his burin.

The first known English settlement in the inlet occurred in 1718, when Christopher Spurrier of Poole, England established a shipbuilding company at Ship Cove. By 1813, the population of Burin stood at 1,092.

In 1912, a fog alarm was established on the eastern side of Little Burin Island to mark the entrance to the inlet. The signal was housed in a wooden, flat-roofed building that stood adjacent to a keeper's dwelling. Both of these structures were painted in black and white horizontal bands.

The diaphone fog alarm, operated by air compressed by an oil engine, was sounded during thick or foggy weather, giving one four-second blast in every eighty-eight seconds.

A wooden, octagonal lantern, painted white, was mounted atop the engine house in 1915 to beam forth a fixed white light at a focal plane of 27.5 metres (90 feet).

On November 18, 1929, an earthquake occurred off the southern coast of Newfoundland, sending a fifteen-metre-high tidal wave into Burin Inlet. Nine lives were lost, and numerous homes, barns, wharves, and boats were destroyed. The tidal wave also caused significant damage to the fishing grounds, which did not fully recover for over a decade.

In the 1950s the facilities on Little Burin Island were replaced by a new double dwelling and a fog alarm building. Commercial power reached the station in 1970, and two years later, the keepers and their families, who had been living on the island for months at a time, were replaced with a four-person rotational crew.

The station was destaffed in 2003, and the vacant keeper's dwelling slowly deteriorated until the Department of Fisheries and Oceans had it and a generating shed torn down in 2014. The dwelling was built using hazardous materials, such as lead paint and asbestos, which had to be disposed of properly. It was a walk back in time for the demolition crew as a 2003 calendar still hung from a wall and kitchen table and chair looked as though the occupants had just stepped out.

Navigation aids, consisting of a solar-powered light and an automatic fog signal remain on the island.

Located on the eastern side of Little Burin Island, near the entrance to Burin Harbour on the east side of the Burin Peninsula.
Latitude: 46.98017, Longitude: -55.19072

For a larger map of Little Burin Island Lighthouse, click the lighthouse in the above map.