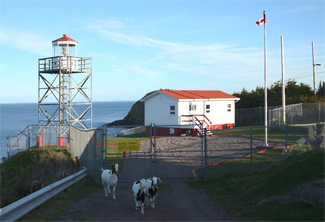 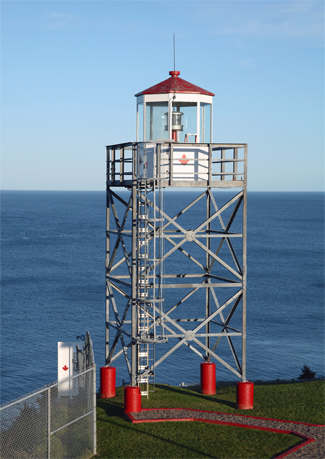 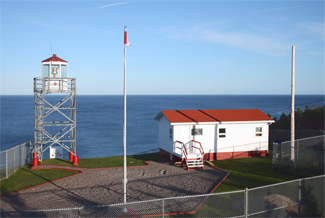 A diaphone fog alarm operated by air compressed by an oil engine was established at Tides Point in 1912. The alarm, sounded during thick or foggy weather, gave two, two-second blasts every ninety seconds in this pattern: blast 2 seconds, silent 5 seconds, blast 2 seconds, silent 81 seconds. In 1912 the station comprised a keeper's dwelling, an engine house, and a store house, painted in red and white vertical stripes.

Michael Dicks, who was born on Oderin Island off the coast of the Burin Peninsula, was the first keeper at Tides Point. He was succeeded in 1925 by his son John Dicks, who served until being appointed a provincial superintendent of operations in St. John's in 1949, whereupon he was replaced by his assistant Bob Power.

Irene Dicks, daughter of Keeper John Dicks, grew up at Tides Point Lighthouse along with eight siblings. In an essay on life at the station, Irene wrote:

Life on Tides Point was a family commitment. We had a farm on which we kept horses, cows, goats, and sheep. Everyone helped in one way or other to care for the animals.

Those chores provided us children with a great deal of pleasure, especially when a new arrival came to the farm. A name was selected  mostly, a young calf was named after a month in the year, usually the month of birth. A team effort was in place when the time came to cut the hay and stack it away in the barn for feed for the cattle in winter.

During spring, summer and autumn, the entire family participated in getting the gardens ready for planting all kinds of vegetables for the following winter.

In the late afternoon of November 13, 1941, eight-year-old Irene was playing on the grounds of the station when she noticed a small boat offshore near the edge of a fog bank. As she watched the vessel drifting shoreward, a bright light suddenly erupted above the boat. Sensing something was wrong, she ran inside to get her father, who recognized the craft as a lifeboat. Keeper Dicks signaled the boat to make its way to Tides Cove, just north of the station, and after locating his assistant headed toward the cove himself.

As the keepers lifted five exhausted men from the lifeboat, they learned that the men had been aboard the SS Larpool, a 3,872-ton British Merchant Navy steam freighter that was torpedoed by the German U-boat 208 about 250 miles east-south-east of Cape Race. After the first torpedo struck the Larpool, the captain and four crewmembers made there way to a lifeboat, and then helplessly watched as two more torpedoes sent the Larpool to the bottom of the Atlantic. Roughly half of the crew of forty-three perished. Eleven other survivors were picked up by a Canadian corvette and landed at Halifax, but the five men in the lifeboat drifted for eleven days before reaching the shore at Tides Cove.

Dehydrated and malnourished, the three weakest men were rushed to Burin Cottage Hospital, where after several weeks of care they recovered. In gratitude for her help in the rescue, the Larpools captain, Charles Patton, gave Irene a first-aid kit, one of the few items the men were able to grab before abandoning the ship. Decades after the incident, Irene Dicks-Pearcey still had the pair of scissors from the kit.

S.J. Scott built a combination light and fog signal building consisting of a one-story structure with a tower protruding from one of its corners at the station in 1957 along with two dwellings for $67,300. In 1992, the present square skeleton tower with a height of 11.3 metres was erected at Tides Cove Point, and the station was de-staffed and automated. After being unwatched for several years, the station was re-staffed in 2003.

The station was originally known as Tides Point, but modern Lists of Lights published by the Canadian Coast Guard refer to the station as Tides Cove Point.

For a larger map of Tides Cove Point Lighthouse, click the lighthouse in the above map.