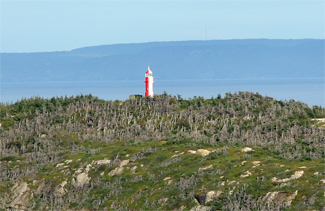 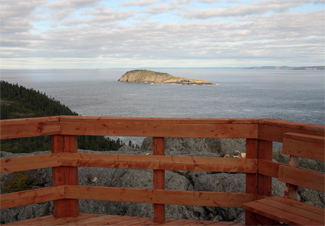 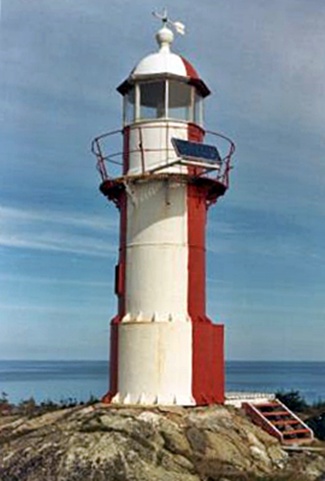 Located at the tip of the Eastport Peninsula in Bonavista Bay, the fishing community of Salvage has been described as perhaps the most picturesque of all Newfoundland fishing villages, in a perfect little gem of a harbour among bare headlands and surf-washed islands.

By 1676, six English masters had established a summer operation at Salvage that, with their families and servants, had a population of sixty-six people. At the time of the 1836 census, Salvage had 181 inhabitants, but its population had risen to 453 by 1869. That year, the community sent ten vessels to the spring seal hunt, and seventy-three of its men sailed to the Labrador fishery in the summer.

In an 1882 report on sites for proposed lighthouses, Inspector of Lighthouses John T. Nevill noted a landing had been made on Little Denier Island just off Salvage and all necessary particulars were taken for preparing plans for a light station. Money had been allocated for a lighthouse on Little Denier Island, but this amount, according to Inspector Nevill, would not be sufficient as a powerful light would be required on the island and an expensive landing and road to the summit would have to be built.

Instead, Inspector Nevill recommended that the appropriated money be used to build a minor light on Goodmans Island, at the entrance to nearby Barrow Harbour, and that a more powerful light be built for Bonavista Bay at a later date. In the end, no lighthouse was built in the area as a result of the 1882 inspection trip.

Inspector Nevill returned to Bonavista Bay in 1887 and visited Kings Cove Head and Little Denier Island to determine which would be the best site for a lighthouse to serve Bonavista Bay. Little Denier Island was selected, and a road was constructed from the landing place to the summit, where a store was built, to allow work on the lighthouse to begin the following spring. An iron tower was ordered from Victoria Works, and instructions were given for the required lumber for the keepers dwelling to be cut at Bonavista Bay.

Construction materials were landed on Little Denier Island during the last part of May in 1888, and work commenced on the station using skilled labour sent from St. Johns and several men from the locality who were employed at such work as they were suitable for. A Mr. Cornick was in charge of erecting the iron tower, while William Stowe was foreman for the rest of the work. Under their management, the lighthouse and dwelling were completed in fourteen weeks, allowing the light to be put in operation on October 1st. Robert Oakley, who had been serving as assistant keeper on Cabot Island, was placed in charge of the light.

The mansard-roofed keepers dwelling stood 5.3 metres from the keepers dwelling and was linked to it by a covered passageway. Both the dwelling and tower were painted in red and white vertical stripes. The 7.6-metre-tall tower employed a revolving, six-sided lens to produce a white flash every thirty seconds at a focal plane of 90.8 metres.

Inspector Nevill visited the completed station on August 3rd, 1889 and was pleased to report that its condition was far better than any other station has been found in at a first visit. Nevill recommended that a concrete floor be put in the cellar, a water closet be provided, and that grass seeds be sown around the lighthouse to prevent the turfy surface around the buildings from blowing about.

In 1931, the light was changed back to acetylene and made an unattended light. Robert Dyke followed by a family of Hunters made trips to Little Denier Island about four times a year to change the gas cylinders. The light is now solar powered and flashes once every three seconds.

For a larger map of Little Denier Island Lighthouse, click the lighthouse in the above map.

From the Trans-Canada Highway, go east on Route 310 for 28.4 km (17.8 miles) to Salvage. Once in Salvage continue around the right side of the harbor, and you will find a sign for Salvage Trails near the end of the road. Southern Head Trail will take you atop a headland where you can get a distant view of Little Denier Island and its lighthouse. Once you get to the first summit, take the trail left toward the cemetery (not Southern Head Pond) and then the trail for Southern Head Lookout. The trail to the lookout is 0.7 km long and includes some steep portions, but we found the hike quite enjoyable.