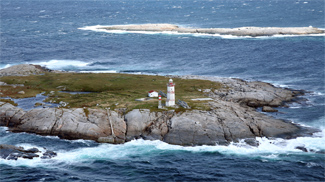 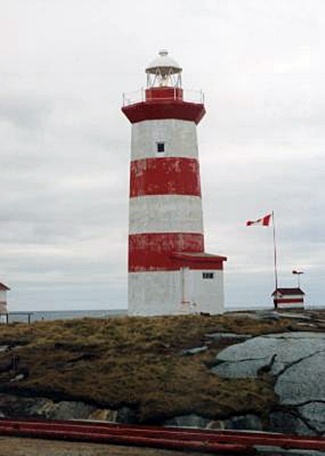 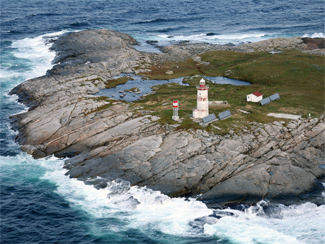 The Cabot Islands, two in number, are the outermost of a collection of islands and foul ground found off Cape Freels. From the sixteenth to the eighteenth century, the islands were known as the Stinking Islands because of the offensive smell produced by the mounds of guano deposited there by seabirds. The name of the islands was changed to Cabot Islands in the 1800s, after John Cabot, and Italian navigator and explorer, who discovered Newfoundland in 1497. In 1877 petitions were presented to the Newfoundland House of Assembly from J. T. Oakley and others of Greenspond and J. B. Blanford and others of Twillingate, calling for the erection of a lighthouse on the Cabot Islands. After the petitions were received, John T. Nevill, Inspector of Lighthouses, noted that a lighthouse on the Cabot Islands would supply a very essential link in the Chain of our Northern Lights, filling, as it will, the vacancy existing between Cape Bonavista and Wadhams Island stations. The importance of the situation indicates the necessity of having a Light of powerful character, while its position between a fixed White (Wadhams) and a revolving Red and White Light (Bonavista) points to the use of a revolving White Light. Inspector Nevill estimated the lighthouse could be put in working order for $16,000. A lighthouse had been established in 1873 on Puffin Island near Greenspond, but this light functioned as a harbour light not a coastal light.

On July 12, 1878, the following notice appeared in The Newfoundlander:

PERSONS desirous of tendering for the erection of the Light-Keepers Dwelling on the above Island, can see the Plan and Specification at the Office of Inspector of Light Houses between 11 and 2 each day.
Sealed Tenders to be sent in at or before noon on TUESDAY, 23rd instant.
The Board is not bound to accept the lowest or any Tender.

The plan for Cabot Islands Lighthouse called for a iron light tower surrounded by a two-storey, frame keepers dwelling. Inspector Nevill traveled to Britain to make arrangements for the tower and reported that due to the dullness of trade the work was done on very advantageous terms, and so promptly that everything arrived in St. Johns at almost too early a date for dispatch to the Island. The materials were landed on Northwest Cabot Island during the 1879 season, and Austin Oke oversaw the erection of the tower and lantern room, and the installation of the lighting apparatus.

The following Notice to Mariners was printed to alert mariners to the establishment of Newfoundlands thirtieth lighthouse:

Light on Stinking Island.On 1st March, 1880, from a lighthouse recently erected on Stinking (Cabot) island, northern side of Bonavista bay:It is an intermittent white light, the interval of light being about eleven seconds, and of darkness nine seconds; elevated 74 feet above the sea, and visible from a distance of 10 miles. The lighthouse, rising from the centre of the keeper's dwelling (square and flat roofed), is constructed of iron; the buildings are painted in red and white bands.

The fourth-order lens used at Cabot Islands was manufactured in France by Barbier and Fenestre. In 1884, Inspector Nevill reported that the machine responsible for revolving the light would occasionally stop for no apparent reason. The light would operate fine for several weeks and then be troublesome for a period. Austin Oke was sent to the station to adjust the machinery, and no further difficulty with the light was reported that year, but similar issues occurred again in 1888.

Another issue that frustrated the keepers was a leaky roof. Complaints were received in 1883, 1889, and 1892, and then in 1893, the annual report noted, The roof of the dwelling is in a very unsatisfactory condition, and needs early attention. There are both direct leaks and those of condensation. It will be necessary to take off the felt and gravel, re-arranging the roof in a way to provide an air-space to prevent the injury caused by the difference of temperature of the rooms and the external atmosphere. New eaves and conductors and a new covering for the roof were put on in 1894, and no further incidents of leakage were reported.

In 1893, the keeper was supplied a good spyglass to enable him to exchange signals with people at Greenspond. In this manner, the keeper could communicate important information to Greenspond, such as if landing conditions were good at the island.

The old fog alarm from Green Island near Catalina was transferred to Cabot Island, where it was put in operation in 1921. The signal was powered by air compressed by an oil engine and consisted of a five-second blast in every 100 seconds. At this time, the characteristic of the light was changed from intermittent white to fixed white.

A new fog alarm was installed in 1950, but a bigger change occurred a decade later, when in 1960 the original two-storey dwelling encircling the iron tower was torn down and replaced by a single-storey bungalow. The iron tower was encased in reinforced concrete giving the tower its current octagonal shape. A new fog alarm building, landing facilities, and a tramway were also constructed in 1960.

Today the light on Cabot Islands gives a white flash every ten seconds, and the fog horn sounds a four-second blast each minute when needed.

For a larger map of Cabot Islands Lighthouse, click the lighthouse in the above map.

Cabot Islands Lighthouse is best seen by boat or from the air.