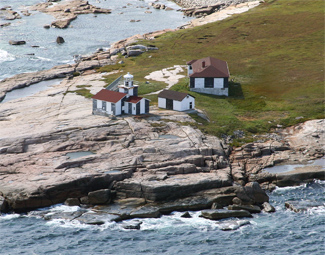 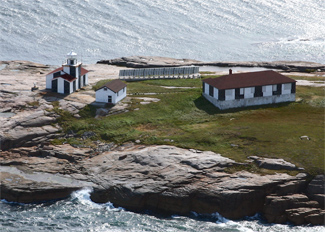 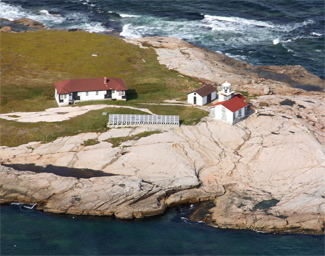 The Wadhams are a collection of islands located southeast of Fogo Island at the eastern entrance to Hamilton Sound. Peckford Island is the largest in the group, while Offer Wadham is the outermost island. By the early 1800s, the area around Wadham Islands was a renowned fishing ground, and Peckford and Offer Wadham became home to summer fishing colonies. A lighthouse was built on Offer Wadham in 1858, and Peckford Island received a lighthouse in 1910 to help guide marines into Hamilton Sound. The original Peckford Island Lighthouse stood on the southeast point of the island and was a wooden, octagonal tower with sloping sides that measured ten metres from its base to the top of its lantern. The tower was painted in black and white vertical stripes, while its lantern was white. The keepers dwelling, located north of the lighthouse, was also white. A fourth-order lens was used in the lantern room to alternately show two-and-a-half seconds of red light and two-and-a-half seconds of darkness at a height of 15.8 metres above sea level.

A fog alarm operated by air compressed by an oil engine was established on Peckford Island in 1926. The equipment was housed in a flat-roofed building located on the opposite side of the tower from the keepers dwelling. The three structures, the lighthouse, the dwelling, and the fog alarm building were all linked together by covered passageways, and the dwelling and fog alarm building were both painted in black and white vertical stripes, like the lighthouse, shortly after the fog alarm was completed. The fog alarm would sound two 1.5-second blasts every sixty seconds in this manner: 1.5-second blast, five seconds silence, 1.5-second blast, fifty-two seconds silence.

A new lighthouse tower was built on Peckford Island in 1950, but then in 1961, just over a decade later, Davis Construction Ltd. was contracted to build a duplex bungalow and a combined lighthouse and fog alarm and demolish the existing buildings. The new light was exhibited from a square tower that rose above the attached one-story fog alarm building. All the buildings retained the stations trademark daymark of black and white vertical stripes. By 1966, the station had a plant for generating power and an electric light had replaced the acetylene gas light in the tower.

An Airchime fog alarm was installed in 1967, and two years later the staffing of the station was changed to a four-person rotational shift system. The keepers could no longer have their families stay with them on the island as the double-dwelling was converted into bachelor quarters. A radiobeacon was installed on Peckford Island in the 1970s.

Peckford Island made the news in 1977, when on the evening of June 26th of that year a strange craft landed on its shores. Tim Severin had recreated a medieval Irish curragh, consisting of cowhide pulled tight over a wooden frame, and set off on a voyage to prove that the fabled account of St. Brendan the Abbot sailing from Ireland to North America sometime between 500 and 1000 could be factual. On May 17, 1877, Severin and three others left Reykjavik, Iceland for the final leg of their transatlantic journey. Forty days later, after nearly being crushed by icebergs off Labrador, the leather boat Brendan ended its 1,300-mile journey on the rocky shore of Peckford Island. The visit of the Brendan to their island must have been a welcomed event for the isolated keepers.

During a conference call in August of 1995, the Associate Director of the Canadian Coast Guards Western Region notified the thirty-five staffed light stations in British Columbia that eighteen stations in Canada would be de-staffed by the following August. Eight of the stations selected for de-staffing were in Newfoundland, and Peckford Island was on the list.

In this 1993 photograph, it is obvious that the station was still staffed as a flag is flying and the paintings look well kept. The aerial photographs on this page were taken in 2009 and show that the dwelling is boarded up and the railway leading from the boathouse has been removed along with the landing derrick and a few small outbuildings. The yellow oil tanks visible in the 1993 are also absent, having been replaced by a large array of solar panels.

Peckford Island Lighthouse remains active, exhibiting a white flash every ten seconds. The stations fog horn, which sounded a three-second blast in every thirty seconds, was discontinued in 2014. The light is now exhibited from a square, skeletal tower that displays a red rectangular daymark with a white band.

Located on Peckford Island, the largest of the Wadhman Islands found at the eastern entrance to Hamilton Sound.
Latitude: 49.530444, Longitude: -53.851333

For a larger map of Peckford Island Lighthouse, click the lighthouse in the above map.

Peckford Island Lighthouse is best seen by boat or from the air.