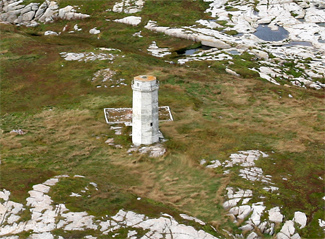 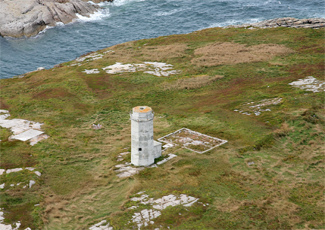 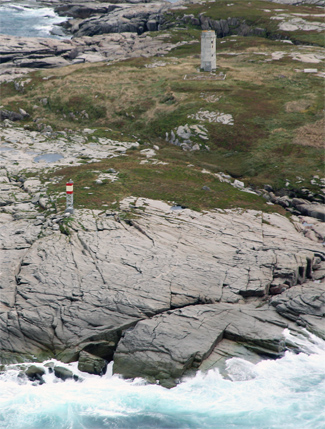 The Wadhams are a collection of islands located just offshore from the northeast tip of Newfoundland. Peckford Island is the largest in the group, while Offer Wadham is the outermost island.

In 1841, a petition singed by 276 merchants, planters, and other residents of Twillingate and the district of Fogo was sent to Henry Prescott, Governor of Newfoundland, asking for a lighthouse on the Wadham Islands. The petition read in part:

That your petitioners taking into consideration the increasing trade carried between those parts of the Island in which they reside and St. Johns, and the dangers to which vessels employed in navigating the coast are exposed, are unanimously of opinion that if a Light House was erected in some eligible situation it would be of great benefit to such vessels, and enable them to avoid many dangers to which they are now exposed.

That from the opinions of persons best informed on the subject, and well acquainted with the coast, the Wadham Islands afford the best situation for a Light to be placed on, and where it would render the most effectual service to mariners.

That a Light House would not only be of great benefit to the coasting trade between the Northern District and St. John's, but also to vessels arriving from foreign voyages, particularly in the fall of the year, when laden with provisions, the loss of only even one of which would be of serious importance in these remote parts of the island, as at that late season of the year it could not be replaced; it also should not be forgotten that to the numerous vessels sailing from St. John's and Conception Bay for the Fishery on the coast of Labrador a Light House would be of great service, and afford them the necessary directions to avoid dangers to which they are liable in common with others.

Thomas Bennett, Chairman of the Commissioners of Lighthouses, concurred with the petition and after stating that the usefulness of such a light had not been by any means exaggerated, he recommended the Legislature give the petition their most favorable attention.

1841 was a chaotic year in Newfoundland with Governor Prescott resigning and religious riots breaking, so it isnt too surprising that no action was taken on the petition. The elected House of Assembly was amalgamated with the appointed Legislative Council in 1842, and this lasted until two chambers were once again established in 1848. Seven years later, in 1855, Newfoundland gained a form of self-government. During the unsettled period of 1841 to 1855, only two lighthouses, Cape Bonavista and Cape Pine, were built in Newfoundland, and Cape Pine was built by the Imperial Government.

A petition from William Tucker and other inhabitants of Twillingate and Fogo was presented to the Amalgamated Assembly in 1844 calling for a lighthouse on Offer Wadham Island. A select committee was appointed to look into the matter and took testimony from experienced mariners. John Slade testified that during the previous four years no less than fourteen vessels had been lost on the Wadham Islands and several souls had perished. Thomas Knight, who had sailed numerous times between St. Johns and Notre Dame Bay, noted that Offer Wadham Island was the only island in the group that had a harbour and that he had seen as many as twenty fishing boats at anchor in the harbour. The committee fully endorsed the establishment of the lighthouse, but it wasnt until 1856 that an act was passed stating, As soon as funds can he provided for such purpose, a Light House shall be Erected on the Offer Wadham Island; and as soon as further funds are available a Light House shall be Erected on Dodding Head.

In March of 1857, a lantern and lighting apparatus were ordered from David and Thomas Stevenson of Edinburgh, Scotland for Offer Wadham. When the Stevensons received a lens for the lighthouse from Paris, they found it defective and had to procure a second one. This delayed the arrival of the lens and lantern at St. Johns until September 16th.

During 1857, Alexander Smith, a stonemason, and William Campbell, a builder, constructed a lighthouse on Offer Wadhman Island as well as one on Dodding Head near Burin. Smith had just a year earlier built the lighthouse on Green Island and would later work on the Puffin Island and Rose Blanche lighthouses. Campbell later teamed up with a different stonemason to construct Ferryland Head Lighthouse.

Lighthouse Inspector Robert Oke, who had designed Offer Wadham Lighthouse, left St. Johns on September 28 with the lens and lantern, after having being delayed by a series of strong gales. With much difficulty, Oke landed on Offer Wadham on October 1st and found that the red brick tower and attached wooden dwelling had been completed in a satisfactory manner. Several landings were attempted during the next two weeks, and, at considerable risk, only the two keepers, their luggage, provisions, and fuel made it ashore. Incessant high seas and the lateness of the season forced Inspector Oke to store the lighting apparatus at Seldom-Come-By and delay the lighting of the station which had been planned for March 1, 1858.

Inspector Oke departed St. Johns on July 20, 1858 aboard the schooner Medway and, after stopping at Cape Bonavista and Green Island, arrived at Seldom-Come-By on August 6th. The lighting apparatus was taken to the island the following day, and the next week was spent installing it atop the tower. Inspector Oke left the island on August 15, but Offer Wadhams fixed white light, produced by a double Argand burner and a fourth-order lens, was not placed in permanent operation until October 4. The light had a focal plane of 30.5 metres, and Thomas Hennessey was employed as the first head keeper.

After repeated complaints to the Board of Works regarding the quality of the light at Offer Wadham, Charles Prowse was sent to the island in November, 1862 and again the following May to investigate the matter. As a result, Keeper Hennessey and his son, who was serving as assistant keeper, were dismissed, and Charles Prowse was placed in charge of the light. Inspector Oke took the occasion to note that this light was not the only establishment whose light was complained of, and where the lighting apparatus had been injured and tampered with, causing onerous and disagreeable duties to be imposed on the inspector. All this was, according to Oke, the result of the error in appointing persons to the situation of Lighthouse-keepers, whose inexperience and habits render them unfit for the performance of the duties entrusted to them, and to the prejudice of Assistant keepers who were in the service ten and twelve years.

In 1863, the tower was coated, inside and out, with Portland cement, a sign that the brick used in the tower must have been of poor quality. The inspector noted that the tower needed to be recoated in 1867, and then in 1878, after scaffolding was put up to repair the brickwork again, the tower was found in an extremely defective condition, and the cornice was so rotten that large chunks of it fell to the ground when touched. The tower was encased with a new layer of brickwork in cement, and the new outside face was cemented. The freestone cornice was cut away and replaced by a cast-iron gallery.

In 1891, Inspector John T. Nevill recommended that the brick tower be encased in iron. This work was carried out in 1893, and the towers new boiler-plate skin was painted to look like the brick formerly exhibited. In 1896, Nevill recommended that the gallery and drum below the lantern room also be encased in iron to render the tower watertight.

By the 1870s, the fishing grounds around Offer Wadham had become quite renowned, and a summer colony, consisting of shacks and stages for fish drying, was established on the island. Offer Wadham fish gained a reputation as the best salt cod in Newfoundland. The islands natural water supply was insufficient for its increasing population, so in 1876 materials were sent to the island to construct a brick tank for collecting water from the roofs of the stations buildings. The population on Offer Wadham continued to increase to the point that a post office was established on the island in 1899.

The original keepers dwelling was constructed with a pitched roof, which made the bedrooms in the upper story rather cramped. When the roof needed repairs in 1886, it was taken down and replaced with a mansard roof that provided additional space for the keepers.

After other lighthouses were built in the area, the signature of Offer Wadham Lighthouse was changed from fixed white to a white flash every thirty seconds through the installation of a six-sided, fourth-order lens in 1890. In 1919, the light was changed to occulting, visible five seconds, then eclipsed for five seconds.

Charles Prowse served as keeper at Offer Wadham for thirty-six years, from 1863 to 1899, and during this period he had many assistants. One of these was Henry Waterman, who, according to Inspector Nevill, came to an untimely end in the spring [of 1880] by falling through the ice, thus removing from service an officer who had always conducted himself worthily.

In 1961, the iron tower was in such bad condition that it was encased in reinforced concrete, giving it an octagonal shape. After this, the station was de-staffed, and Walter Hicks, a former keeper, was employed as a caretaker. The dwelling was torn down in the 1990s for safety reasons. Today, the light on Offer Wadham, a white flash every three seconds, is displayed from a square skeletal tower with an attached red and white rectangular daymark. The old tower, minus its lantern room, remains standing nearby.

Located on the northeast end of Offer Wadham Island, one of the Wadham Islands found at the eastern entrance to Hamilton Sound.
Latitude: 49.593417, Longitude: -53.762806

For a larger map of Offer Wadham Island Lighthouse, click the lighthouse in the above map.

The lighthouse is best seen by boat or from the air.