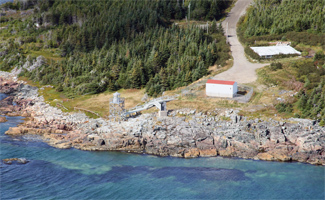 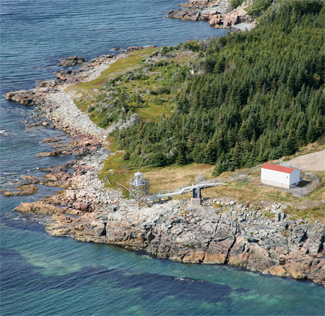 Burnt Point is located on the eastern side of the harbour at Seldom-Come-By on the southern shore of Fogo Island. The colourful name of Seldom-Come-By is attributed to the fact that fishermen bound to the Labrador fishery would seldom come by the area without stopping at the harbour, which is the first sheltered harbour on the eastern coast of Newfoundland north of Greenspond. In 1858, Robert Oke, Inspector of Lighthouses, requested that a light be built on Burnt Point:

Having been requested to obtain such opinions and information as may be in my reach, whilst traversing the coast, on the subject of perfecting the Lighting of the East Coast of the Island, and having visited Tilton Harbor, Fogo, Herring Neck, Twillingate, Fortune Harbor, and Change Islands, it afforded me an opportunity of conversing on that subject; and it is the opinion of the most experienced that, as there is a Light on the Offer Wadham that it is now indispensably necessary to place a Harbor Light on the Burnt Point of Seldom-Come-By, being the nearest port of refuge; and that in running for that port in the night, Wild Bight may be easily taken for it by a stranger, as it is merely a point separates both. If a Light shall be placed there, it may be said that will be sufficient for the coast, unless it may be thought a matter worthy of consideration to place a Light, either on the Stinking Islands or Cape Freels; in such case it would then be absolutely necessary to place a light at the entrance of Greenspond.

Seldom-Come-By did eventually receive a lighthouse, but it was not until 1905, when three flat-roofed structures, a fog alarm building, a keepers dwelling, and a store house, were constructed on Burnt Point. A fixed red lens lantern light was exhibited from the southern side of the fog alarm building, and the fog alarm sounded a five-second blast every 118 seconds as needed during the navigation season that ran from spring through December. All three structures were painted white with a single, horizontal black band around their middle. Alfred Randell was hired as the first keeper of the light, which had a focal plane of 7.6 metres and could be seen for just over three kilometres.

In 1909, a covered passageway was built to connect the dwelling with the fog alarm building. The fog alarm machinery was overhauled in 1910, and the period of its blast was changed from a five-second blast every 118 seconds to a six-second blast in each minute. A new cellar was provided for the fog alarm in 1913, and in 1917 a new landing boom was erected.

At some point, likely in the 1960s, two keepers dwellings were built at Burnt Point along with a one-storey, rectangular fog alarm building that had a square tower surmounted by a lantern room rising from one corner of its flat roof. This combination lighthouse/fog alarm building was white with two horizontal black bands encircling the first storey.

These structures were removed from the point in 1990 and replaced by a helicopter landing pad and a square, skeletal tower topped by a metal lantern room. Today, the light on Burnt Point produces a white flash every six seconds, and the fog horn sounds a four-second blast each minute as needed.

Visitors to Fogo Island would often pass by Burnt Point Lighthouse as the ferry to the island ran between Seldom-Come-By and Carmanville from 1962 until the mid-1980s. The ferry now runs between the western end of Fogo Island and Farewell.

For a larger map of Burnt Point Lighthouse, click the lighthouse in the above map.

Fogo Island can be reached by car ferry from Farewell. Once on the island, follow Route 333 from Stag Harbour for 11.1 km (6.9 miles) to Seldom, and then turn right and follow the road around the east side of Seldom Harbour for 3.2 km (2 miles) to reach Burnt Point Lighthouse.