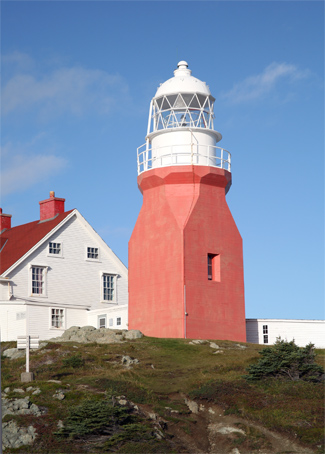 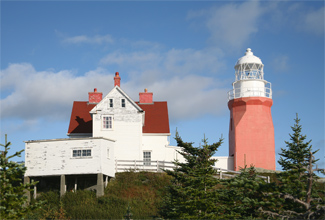 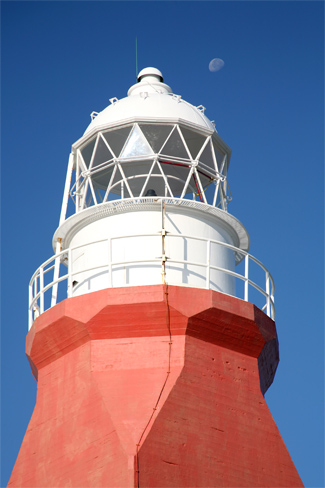 The Town of Twillingate is situated around a harbour formed by North Twillingate Island and South Twillingate Island. The spelling of the towns name was originally Toulinguet, after a group of islets near the French port of Brest, but has been anglicized to Twillingate. When the eastern boundary of the French Shore was moved from Cape Bonavista to Cape St. John in 1783, Twillingate became the main commercial base in the area, earning it the status of the capital of the north. The towns population peaked at 3,694 in 1884, at which time 1,500 men from the area were engaged in the Labrador fishery. In 1867, a Mr. Knight presented a petition from John W. Owen, and other residents of Twillingate, to the Newfoundland House of Assembly calling for the erection of a lighthouse on the northwest headland of North Twillingate Island, known now as Devil's Cove Head, to mark the entrance to the harbour. Designs and specifications for the lighthouse were prepared in 1874 and submitted to public tender, and a contract for its construction was subsequently awarded to Messrs. Colman and Kelly.

The contractors made preparations during the winter of 1874-1875, so they could begin work as early as possible in 1875. These preparations, however, did not permit the lighthouse to be activated that season, as the lantern and lighting apparatus, which were ordered from Chance Brothers of Birmingham England, arrived too late in the season to be shipped to Twillingate. The corners of the brick tower were beveled near its top, changing its shape from square to octagonal. This gives the tower a unique shape, which many think resembles a milk bottle or baby bottle. The tower was originally painted red while the detached frame keepers dwelling, situated twenty-five feet from the tower and connected to it by a covered passageway, was painted white with a red roof.

The circular lantern room, with its two rows of triangular glass panes, and the revolving lighting apparatus, made up of eight lamps and reflectors, were installed in 1876, and the light was first exhibited on September 1 of that year. The towers white light attained its greatest brilliancy every thirty seconds and was displayed at a focal plane of 335 feet above the surrounding sea.

John T. Nevill, inspector of lights, noted in 1876 that the light was an excellent one and gave general satisfaction. Two years later, in 1878, he reported that the station was the best and most completely equipped station in the island. Part of the reason for the high quality of the light was attributable to its first keeper, Samuel Roberts.

Diphtheria broke out at three Newfoundland light stations, including Long Point Lighthouse, in 1879. Since only Samuel Roberts and his family were affected, Inspector Nevill concluded that the outbreak was due to polluted water, as James H. Preston, the assistant keeper, and his family, who lived under the same roof, attained their water from a different and purer source. Inspector Nevill requested a small outlay the following year to construct an enclosed well to serve as a water supply for the station.

Samuel Roberts retired in 1893 and was replaced by his son. For a time, the change seemed to be disadvantageous to the station, but things soon returned to the same excellent condition as under the first keeper.

A light was built at the end of the wharf in Twillingate harbour in 1885. This structure was rebuilt and supplied with new lamps in 1889, but had to be replaced in 1907 after it was destroyed by the sea. This picture shows the wooden octagonal wharf light in 1924, when it was painted in red and white horizontal bands.

On November 18, 1929, a magnitude 7.2 earthquake, centered on the edge of the Grand Banks, 250 kilometres offshore from Newfoundland, triggered a tsunami that struck the Burin Peninsula, killing twenty-eight people. This earthquake was felt in New York City and Montreal and caused cracks in the brick lighthouse at Twillingate. The brick tower was subsequently encased in 30.5 cm (one foot) of reinforced concrete.

The original lighting apparatus was removed in 1956. Electricity produced by a diesel generator was introduced at the station in the early 1960s, and a decade later the station was connected to commercial power. A causeway to South Twillingate Island was completed in 1973, making Twillingate accessible by land for the first time. This has allowed tourists to easily reach the charming town, which now promotes itself as the iceberg capital of Newfoundland.

Long Point Lighthouse is still staffed by a keeper, and a modern keepers dwelling at the station serves as a gift shop. The lighthouse and double dwelling were designated Recognized Federal Heritage Buildings in 1989. The current signature of the light is a white flash every five seconds, while the fog horn sounds a four-second blast each minute, when needed.

For a larger map of Long Point (Twillingate) Lighthouse, click the lighthouse in the above map.

At Notre Dame Junction on the Trans-Canada Highway, go north for 108 km (67.5 miles) on Route 340, which will eventually terminate at the parking lot and viewing area adjacent to the lighthouse. Along the way, you will pass through Loon Bay, Fairbank, Virgin Arm, Indian Cove, and Twillingate.

The lighthouse is owned by the Canadian Coast Guard. Grounds open, tower open at discretion of keeper.