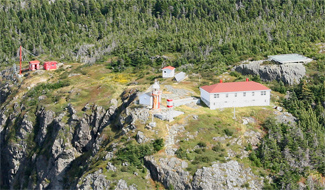 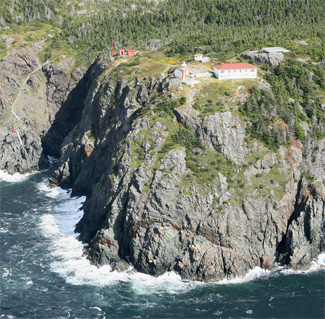 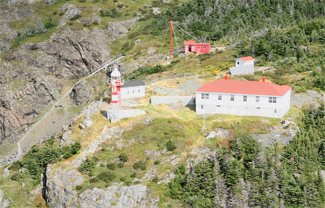 The Exploits River, the longest river in Newfoundland, empties into the Bay of Exploits, which extends from the river's mouth to Notre Dame Bay. The Bay of Exploits contains over thirty islands, two of which are known as the Burnt Islands. The Burnt Islands border on Notre Dame Bay, and around a natural harbour located between the two islands is found the resettled town of Exploits. The Burnt Islands today are more commonly known as the Exploits Islands. At the time of the first official Newfoundland census in 1836, Exploits had a population of 220. The community reached its peak population of around 625 in the 1880s, when its inhabitants were engaged in the inshore fishery, the Labrador fishery, and shipbuilding. The population declined greatly during the depression, and after World Ward II only 289 residents remained. As a result of resettlement agreements, the population fell to just five in 1976. Today, a few of the old dwellings have been restored and are used as summer homes.

A 4.2-kilometre trail led from the station to Exploits, but supplies were typically brought to the station by boat. When the seas were calm, a vessel could tie up at the rocks at the base of the cliff at Surgeon Cove Head, and then supplies could be hoisted up to the station. The trail leading up to the lighthouse from the water was very steep and hazardous.

A type B diaphone fog alarm was established at Surgeon Cove in 1955, and in 1961 a $42,500 contract was awarded to Twillingate Engineering and Construction Ltd. to build the present duplex to replace the original dwelling. The station was converted to generated electric power in 1965. That same year, the Montreal Shipping Company petitioned the government to staff the station year-round, arguing that "contact with the light keeper would be of considerable benefit especially in relation to ice congestion and movements in the entrance to the Bay over which the light keeper has an excellent view." Located at the entrance to Ship Run that leads to Lewisporte and Botwood, Surgeon Cove was an important navigation point for ocean-going paper carriers and oil tankers. A radio telephone installed in 1965 greatly improved communication with the station.

Keepers were able to have their families live with them at Surgeon Cove until 1969, when the duplex was converted to bachelor quarters and staffing was changed to a four-person rotation system. An electronic foghorn was installed in 1976.

Barry Porter was transferred to Surgeon Cove Lighthouse on March 11, 1992. After settling in, he had a cup of tea and chatted with Arch Budgell, the head keeper, who came off his shift at 10 p.m. When Budgell went to his room, Porter set his alarm for 2 a.m., and then settled into the couch for a few hours of sleep.

After eight years of working the 2 a.m. to 10 a.m. shift, Porter's internal clock was used to this schedule, but when he woke up he noticed his alarm clock had stopped. Porter was shocked to learn it was nearly 3 a.m., but what created even more panic was when he looked out the window to check on the light and discovered it was out. Porter bolted downstairs, pulled on his boots, and dashed to the tower. After climbing the tower, resetting the light, and flipping a few switches, the light thankfully started to flash.

Rather embarrassed, Ported confesser what had happened to Keeper Budgell later that day. Budgell just laughed and said, "That's Seeme up to her old badness." Porter later learned that the same thing had happened to two other keepers on their first shift at Surgeon Cove.

Seeme's real name was Lavita Seymour, and she lived with Keeper Gus Jeffries and his family at Surgeon Cove after her husband passed away. The Jeffries' youngest daughter couldn't pronounce Seymour, so she called their live-in guest Seeme. Seeme, who passed away on New Year's Eve in the same bedroom used by Porter, is a good ghost, but likes to give keepers her unique welcome to Surgeon Cove Lighthouse.

Porter served at Surgeon Cove for ten years, leaving when the station was automated in 2002. Three years later, the station was turned over to the town of Lewisporte to be developed for tourism. After inviting proposals, the town signed a long-term lease in 2008 with Canoe Hill Adventures, which plans to use the duplex as a base for their sea kayak tours or as a retreat for those looking to get away from it all.

The light at Surgeon Cove today is a white flash every five seconds, while the foghorn gives a three-second blast in every thirty seconds as needed.

For a larger map of Surgeon Cove Point Lighthouse, click the lighthouse in the above map.

Surgeon Cove Lighthouse is best seen by boat or from the air.

The lighthouse is owned by the Town of Lewisporte. Grounds open, tower closed.