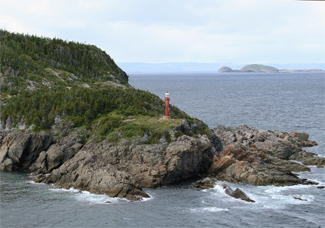 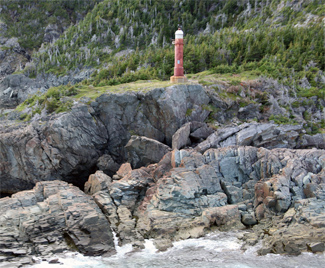 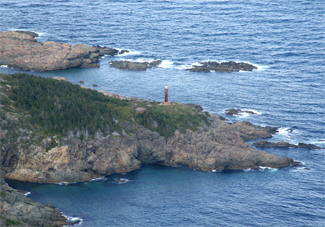 Long Island is located on the western side of Notre Dame Bay and is so named because it is 12.5 kilometres in length and generally less than two kilometres wide, however, on its western end the island widens to over six kilometres. Long Island is surrounded by numerous small islands, making navigating the surrounding waters rather tricky. In 1904, a fixed white light produced by a fourth-order lens installed atop a circular, eight-metre-tall, iron tower commenced operation on Southern Head, the eastern extremity of Long Island. The light had a focal plane of 31.5 metres and was flanked by a two-story, mansard-roofed keepers dwelling. The tower and dwelling were both painted white, and S. Parsons was hired as the first keeper with Samuel Short as his assistant.

Although the lighthouse did not commence operation until around June of 1904, it must have been erected the previous season, as in February of 1904 the following accident occurred near the lighthouse.

This little Town (Triton, near Pilleys Island, NDB) has recently been visited by severe affliction. Early on Monday morning, February 1st, two young men, George WINSOR and George FIFIELD, left their homes to go after some seals that were to be seen around the Long Island Lighthouse. What happened to the unfortunate young men no one really knows, only about midday another crew on the same errand found their boat bottom up. No signs of the missing men were to be seen but the cap of one and the cuffs of the other were picked up. It is generally thought that they had killed a large seal and in the effort to get it in their boat they had capsized her. Their fate must to a large extent, remain a mystery until that day when the sea gives up its dead. A heavy gale of wind made the finding of the bodies impossible. The deceased young men were of one age, 20 years, and had always been close companions. They were both much beloved and respected by one and all in their little town. Their bright and genial disposition and their manly Christian character endearing them to everyone who knew them. The parents, Joseph WINSOR and Philip FIFIELD, are left to mourn their sad loss, and each leaves a wife and one child. The news of the sad accident plunged the whole town into deep mourning - much sympathy is felt for the bereaved families. The deceased were like brothers in life, and in death they were not divided.

A derrick and tramway facilitated landing supplies at the station, and a storehouse was located near the dwelling. The station also had a well to provide the water supply.

In 1931, the light source was converted to acetylene gas, and its characteristic was changed to flashing white light. This conversion allowed the light to be automated and the station de-staffed.

The light was solarized in 1987, and in 1990 the tower was refurbished by the Coast Guard. By 2009, the normally white tower was thoroughly rusted as shown in the pictures to the left, and the Coast Guard decided that the 105-year-old tower needed to be replaced.

As the Coast Guard were always looking at refurbishing or replacing some of these older towers, said Paul Bowerig, supervisor of Aids to Navigation for Newfoundland, and this old structure was deteriorated so badly that it was a safety concern for the technicians going into it to repair the light. So we decided that we would take that old tower out and replace it with a modern tower. We dont build these cast iron ones anymore. We now go with aluminum structures that have day markers on them, and theyre powered by solar energy.

The replacement effort started just days after the pictures to the left were taken and took roughly four weeks to complete, ending in October of 2009. As the site is not accessible by road, a helicopter was used to bring in a four-man crew and the necessary materials for assembling the new tower on the point. The new light produces a white flash every six seconds.

In most cases the Coast Guard tries to maintain its historic lighthouses, but if this proves too costly or jeopardizes its crews, modern aluminum towers that require little maintenance will be erected.

For a larger map of Long Island East End Lighthouse, click the lighthouse in the above map.

Although you can take a car ferry to Long Island, locals say that there are no established trails that provide access to the lighthouse. The lighthouse is thus best seen by boat or from the air.