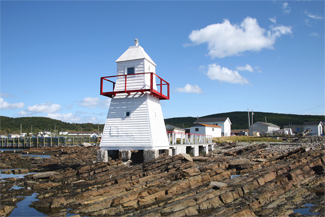 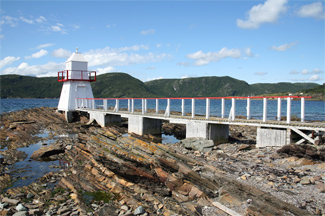 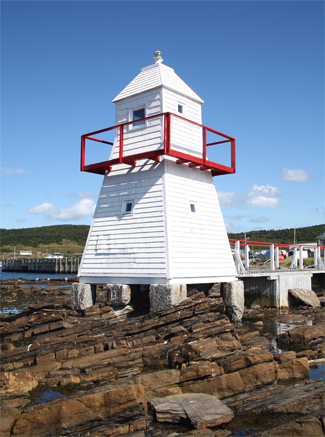 Conche is located on the eastern shore of the Great Northern Peninsula. While there are various theories for how the community got its name, many locals believe it is because the small peninsula that protects the harbour where Conche is located is shaped like a Conch Shell.

While permanent settlements along Newfoundlands French shore were not permitted until 1904, there were some who dared to defy the order and overwinter along the rugged coast. James Herbert Dower arrived in Conche in 1816 from England aboard the Urdu. Dower and his crew decided to settle in Conche Harbour, and returned to England the following year to fetch their families. By 1857, Conche was a thriving fishing settlement with the British immigrants working peacefully alongside the seasonal French fishermen. The French Navy would hire guardians to protect their fishing premises during the winter months, and a few of the early Conche settlers were employed in that service.

In 1861, John Dower, the son of James Herbert was awarded a gold medal by the French government for saving three French seamen who were in danger of drowning on June 24, 1860. This medal can be seen in Conche at the French Shore Interpretation Centre, which is worthy of a visit while you are in the area.

When the French left the French Shore in 1904, Jack Fitzgerald was sent to Conche by the Newfoundland Government to serve as its first English magistrate. In 1914, the square, pyramidal tower that remains standing today was established to serve Conche Harbour. The tower displayed a fixed white light for its first year of operation, and then the lights signature was changed to occulting white, visible for seven seconds and eclipsed for three. A single, red band around the centre of the white tower served as a daymark for many years, but the tower is now all white.

Conche was accessed primarily by the sea until a gravel road reached the community in 1969. As you near Conche on this road, be sure and stop at the overlook for an amazing view of the harbour and offshore islands.

Conche Lighthouse was converted to battery power in 1977, and in 1992 the Canadian Coast Guard erected an aluminum frame tower farther out on the reef to replace the wooden tower. The old lighthouse is now owned and maintained by the Town of Conche.

Located on Silver Point at the entrance to Conche Harbour on the east coast of Newfoundland's Great Northern Peninsula.
Latitude: 50.884722, Longitude: -55.9

For a larger map of Conche Lighthouse, click the lighthouse in the above map.

The wooden lighthouse is owned by the Town of Conche. Grounds open, tower closed.