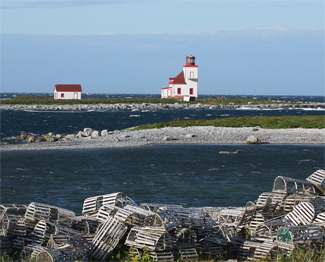 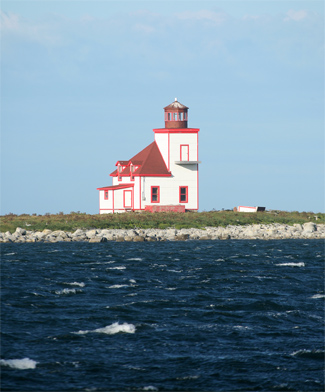 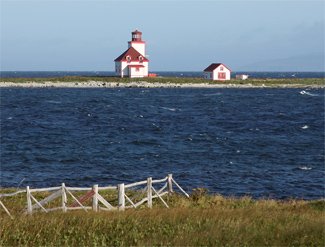 Until 1904, the Colony of Newfoundland had little jurisdiction over much of its west coast as the right to fish there had been ceded in 1713 to the French under the Treaty of Utrecht. This treaty, which also prohibited settlements along the coast, was modified in 1783 to cover the shore from Cape St. John to Cape Ray rather than from Cape Bonavista to Point Riche. It was thus not the Newfoundland government that was interested in establishing lights along the islands west coast but rather the Canadian government, as its steamships from Montreal and Quebec City regularly passed through the Strait of Belle Isle, which borders on a section of the Newfoundlands west coast, during their transatlantic voyages.

In late 1899, the Canadas Department of Marine announced the following:

Flower Island Lighthouse - A new lighthouse marking the south side of the western entrance to the Strait of Belleisle was erected during the past summer, and put in operation on November 7. It stands on the point of Flower Island nearest to the channel on a site about 6 feet above high water mark. The light building is a rectangular wooden building, with a square lighthouse tower rising from the north-east corner of the dwelling house. It is 50 feet high, from the base to the vane on the lantern, and is painted white; the polygonal iron lantern is painted red; the roof of the dwelling is left unpainted.

The light is a revolving bright or white light, the flashes attaining their greatest brilliancy every 30 seconds. It is elevated 51 feet above high water mark, and should be visible, in clear weather, 12 miles from all points of approach by water. The illuminating apparatus is catoptric.

The work was done by the department, under the superintendence of Mr. Kimball Coffin, at a total cost of $8,801.

The Canadian government obtained a lease for the entire island from the Newfoundland Minister of Agriculture & Mines.

In 1912, a fog signal was established on Flower Island in the form of cotton powder bombs that were exploded every fifteen minutes and every five minutes after a vessels fog signal was heard. However, the following caveat was noted in the annual Light List: This fog signal cannot be depended upon.

The style of Flower Island Lighthouse is the only one of its kind in Newfoundland. A number of outbuildings were erected over the years on the island, including a henhouse, storage shed, boathouse, and an outhouse. In 1942 a marine radio beacon station and dwelling were erected at the southwest end of the island.

Besides serving as a coastal light, Flower Island Lighthouse also marked the ledges that guarded the entrance to the contiguous harbours of Nameless Cove, Mistaken Cove, and Flowers Cove.

The name of Flowers Cove was likely been derived from an Italian term, fior daqua, (flower of the sea), which referred to a rock that just breaks the surface of the water. The rocky ledges off the coast may have first taken on this designation, and it was later applied to the island and cove.

The first keeper of the light was Octave Dubois, who served from 1899 to 1902. He was succeeded by Xavier Charest, who also had a relatively short tenure. The keepers most associated with the lighthouse were from the Lavallee family of Quebec City. In fact, the island was even referred to locally as Lavallees Island or Joeys Island  Joe Lavallee started serving as keeper in 1905, at the age of thirty-one.

In the early morning of September 18, 1914, the Black Diamond collier Lingan rammed and sank the government steamer Montgamy in foggy conditions on the St. Lawrence River, twenty-six miles below Quebec. The Montgamy was carrying provisions for wireless stations and lighthouses in the Gulf of St. Lawrence and Strait of Belle Isle along with family members of the keepers at Flower Island and Belle Isle who were returning to their stations. The passengers were asleep when the incident occurred, and within three minutes the Montgamy was at the bottom of the river. Fourteen people perished in the collision including Marie Lavallee, wife of Joe Lavallee, and four of her children, ranging in age from eleven to just eight months. Emile Lavallee, who was nine at the time, was with his father at the lighthouse when the accident occurred. Second Officer La Chance of the Montmagny perished with two children he was trying to rescue in his arms.

Joseph Lavallee later remarried and had additional children while serving as keeper at Flower Island. Emile Lavallee (known locally as Pete) took over the light when his father retired. During the 1960s, he made frequent requests for improvements to the station, which still did not have electricity or indoor plumbing. When Emile became ill in 1968, his son Vincent took charge of the light until the station was closed in 1969. The light was replaced by a modern, automated facility on Nameless Point.

Flowers Cove Lighthouse was purchased in 1970 by William Caldwell, an artist from Ontario. Under the terms of the sale, the station buildings were to be removed from the site or renovated, but this did not happen. The Straits Development Association of Shoal Cove East later purchased the island from Terril M. Butterworth of North Elmsley, Ontario, and is seeking funds to refurbish the lighthouse.

Located on a small island at the entrance to the harbour at Flower's Cove, near the northern end of Newfoundland's Great Northern Peninsula.
Latitude: 51.30836, Longitude: -56.748676

For a larger map of Flowers Cove Lighthouse, click the lighthouse in the above map.

From St. Barbe, travel north on Route 340 for 18.2 km (11.4 miles) to Flowers Cove. The lighthouse can seen from several points along the shore in Flowers Cove, but perhaps the best vantage point is from Nameless Point, the northeast point of town, where there is a modern skeletal tower and an informational sign for Flowers Cove Lighthouse.

The lighthouse is owned by the Town of Flowers Cove. Grounds open, tower closed.