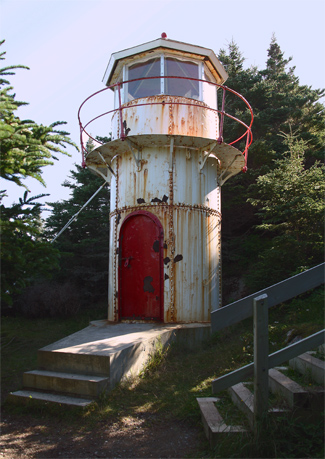 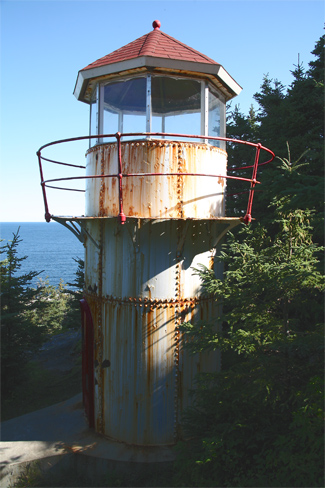 Located on the west coast of the Great Northern Peninsula, Cow Head was named Cap de Pointe by Jacques Cartier on June 16, 1534, but the French fishermen, who had fishing rights along the coast until 1904, renamed it Tete de Vache. The community of Cow Head has traditionally included two parts - Winterside on the mainland and Summerside on the Cow Head Peninsula, known locally as the Head. Families would spend their summers fishing from "the Head" and then return across the natural isthmus, called the Sandbank, to spend the winter inland. This seasonal migration from summer fishing communities to winter shelter was a distinctive Newfoundland tradition that persisted until the late 1960s, when improved roads made the move unnecessary.

Cow Head Lighthouse was erected in the hollow of a promontory on the western side of the peninsula in 1908 and activated in 1909. The circular, eighteen-foot-tall (5.5-metre-tall)iron tower was painted with red and white vertical stripes, while its lantern and dome were white. The tower's fixed white light was displayed at a height of 141 feet (43 metres) above high water and could be seen from fifteen miles.

The first keeper of the light was Jesse Payne, who lived in a small, three bedroom dwelling situated in a sheltered area just to the west and below the lighthouse. After Jesse passed away, his son John L., known as Lighthouse Jack, became light keeper. The keepers maintained the light, which was produced by a large kerosene lamp, from the opening of navigation in the spring until navigation closed around December.

The lighthouse was a gathering place for the people of Cow Head. On Sundays, it was quite common for people to trek up the Lighthouse Path with packed lunches for a picnic.

When an acetylene light with an automatic timer was installed in 1952, Lighthouse Jack only needed to visit the tower occasionally to clean the lens and guarantee proper operation of the light. As a result, Jacks wages were reduced, and he relocated his family to Tuckers Cove, where he could work as a fisherman while still keeping an eye on the light.

Cow Head Lighthouse became battery operated in 1978, by which time it was painted solid white, and remained in operation until being discontinued in 1988 by Transport Canada. Jesse Payne, son of Lighthouse Jack, was the final keeper of the light.

In late 2001, the Central Development Association received $492,780 under the Canada-Newfoundland Comprehensive Economic Development Agreement to undertake improvements to the tourism infrastructure of the Cow Head area. Using a portion of these funds, the Cow Head Lighthouse was restored in 2002 and the small amphitheatre at the start of the Lighthouse Trail was constructed.

The lighthouse was declared a Municipal Heritage Building in 2003.

For a larger map of Cow Head Lighthouse, click the lighthouse in the above map.

From Route 430 in Grose Morne National Park, take a road west to reach the town of Cow Head, and from there drive across the isthmus to reach the headland. Once across the isthmus, take the first road left that leads to the amphitheater and communication tower where you will find the trailhead for the lighthouse trail, an easy 1.5 km loop that takes roughly 45 minutes. Here is a trail map.

The lighthouse is managed by the Town of Cow Head. Grounds/tower open.