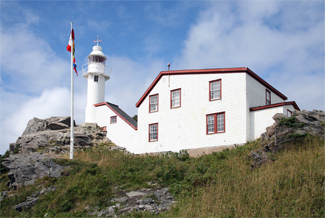 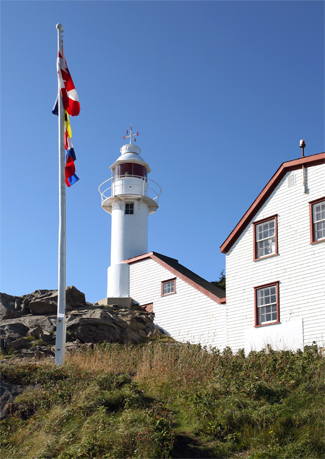 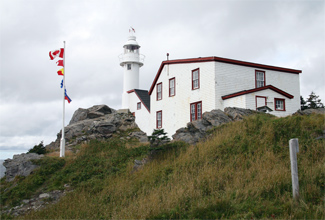 Lobster Cove Head marks the northern side of the entrance to Boone Bay. A few kilometres inside the entrance, the bay separates into two fjords: the East Arm and the South Arm. The East Arm is by far the deepest and is practically surrounded by Gros Morne National Park, while the South Arm has a few settlements, including Woody Point, along its western shore.

In 1889, G.C. Fearn, the member of the legislative assembly for the district that included Lobster Cove, publicized the concern of the residents of his district over the lack of navigational aids in Bonne Bay. Each inhabitant of Rocky Harbour contributed a pint of oil each week to help fuel a light kept by a local fishermen in his own home. Fearn's constituents felt they merited a stronger light provided by the government, and one resident even volunteered to keep it. "A stately old dame," Fearn wrote, "has offered to keep the lighthouse (when erected) free of salary and, said she, 'You may be sure, it will always be burning, for I have my three boys on the banks.' "

Inspector J.T. Nevill selected Lobster Cove Head in 1889 as one of four new lighthouse sites along the west coast of Newfoundland. Four years later, an iron tower was ordered from Victoria Iron Works of St. Johns, and the lantern and illuminating apparatus was ordered from Chance Brothers of Birmingham, England. In 1894, the lantern and apparatus arrived, but the light was not activated until the spring of 1898, when the necessary buildings had been constructed.

A kerosene vapour lamp was situated inside a fifth-order dioptric lens, which made twelve revolutions per minute to produce a flash every 2.5 seconds. The round, iron tower was painted white and connected via a covered way to the keepers dwelling, situated twenty feet to the east. The covered way and dwelling were painted white with black roofs.

Robert Lewis was appointed the first keeper of Lobster Cove Head Lighthouse at an annual salary of $504. William Young succeeded Lewis in 1902 and kept the light until 1941, when his son, George Young, became the third and final keeper of the light. George was one of eight children raised by William and Esther Young at the lighthouse.

Lobster Cove Head became a signal station in 1898, when signal flags started to be used to send messages between ships and the shore. Each flag that was raised up the pole represented a single letter or a phrase, depending on the context. The W flag doubled as I require medical assistance, the U flag could mean You are running into danger, and the J flag carried the important message, I am on fire and carry dangerous cargo.

Automated equipment was installed in the lighthouse in 1969, and the following year, Lobster Cove Heads final keeper, George Young, retired. A contract to service the light was awarded to R. L. Hynes, and in 1970, Canadian artist William Caldwell was given a five year lease to the keepers dwelling. When the lease expired, the property was transferred to Parks Canada, and it is now part of Grose Morne National Park. In 1990, George Young was invited to raise the flag at the official opening of the keeper's dwelling to the public. Interpretive exhibits inside the dwelling describe the history of the inhabitants who lived along the nearby shore and their dependence on the sea. One wall of the exhibit is devoted to the keepers of Lobster Cove Head Lighthouse, and one room shows how the residence was furnished when occupied by the keepers.

Lobster Cove Head Lighthouse was designated a Recognized Federal Heritage Building in 1990 because of its historical associations, and its architectural and environmental value.

Located on a headland at the northern side of the entrance to Rocky Harbour and Bonne Bay on the west coast of Newfoundland's Great Northern Peninsula.
Latitude: 49.602847, Longitude: -57.955912

For a larger map of Lobster Cove Head Lighthouse, click the lighthouse in the above map.

Take Route 430 to Lobster Cove in Gros Morne National Park, and then turn south onto Main Street. After 0.7 km (0.4 miles) turn right and drive 0.6 km (0.4 miles) to the lighthouse. The keeper's dwelling at Lobster Cove Head Lighthouse is open daily from mid-May to mid-October and serves as a park interpretive exhibit showcasing displays on the connection of local communities to the sea.

The lighthouse is owned by the Canadian Coast Guard. Grounds/dwelling open, tower closed.


When we arrived at Lobster Cove Head Lighthouse for our first visit, the signal flags were not flying so we asked the ranger if she could raise some flags to enhance our pictures. Perhaps it was the clumsy phrasing of my request, but she didn't seem exactly thrilled with the idea. Nevertheless, she did head off to retrieve the flags and ended up raising five signal flags below the Canadian flag to spell out BONNE, as in Bonne Bay. Seems they don't always use the same flags as when we stopped by the lighthouse on our return trip down the northern peninsula, the flags spelled out KITE.